Destruction in Beppu: results and report

On September 15, Beppu’s B-Con Plaza saw the first of three major stops on the Destruction tour, with two major title matches at the top of the card. 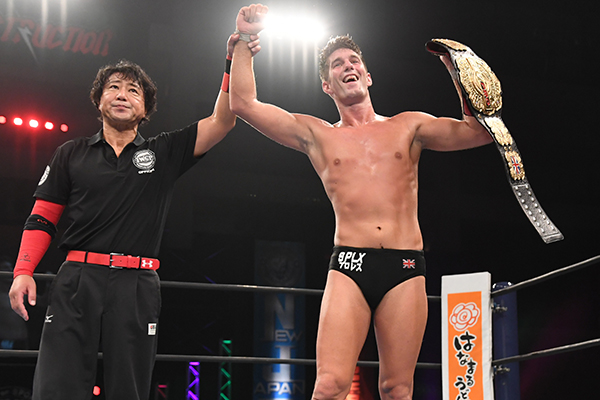 As champion and challenger felt one another out early, Sabre would attempt to go to work on Tanahashi’s injured arm, while Tanahashi would find success by targeting the legs of ZSJ.

Through Dragon Screws and concerted offense from the champion, ZSJ was unable to attain a stable base from which to attack Tanahashi, who retained the bulk of control. At the 15 minute mark however, Sabre would slip to the outside after a Tanahashi Cobra Twist, and the Ace would attempt to land a High Fly attack to the floor. ZSJ walked it off, and Tanahashi had to withdraw from the top rope; he would instead shoot for a baseball slide that was caught by the Submission Master, but even then, Tanahashi retained his wits enough to land successive Dragon Screws as his challenger tried to get back in. 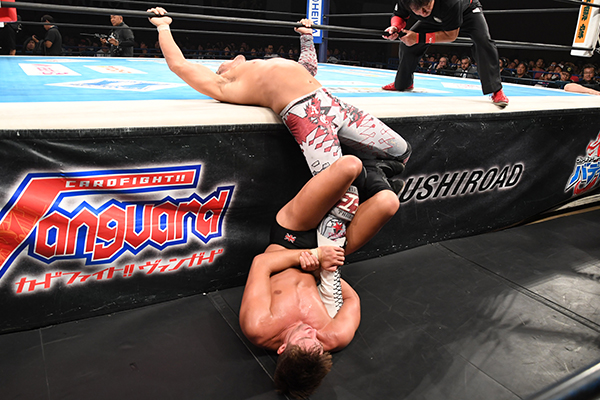 Sabre persistently tried to find a gap however, which he did at 20 minutes with a punishing version of a bow and arrow. Tanahashi would respond with a pair of Slingblades followed by a High FLy Flow to the back of ZSJ; rather than try the move again, or go for a pin however, the Ace instead opted for a modified Triangle Scorpion, which Sabre escaped. The Briton would hit a Zack Driver soon after, but still recovering from Twist and Shouts added to the damage dealt to him, couldn’t score a pin at the 25 minute call. 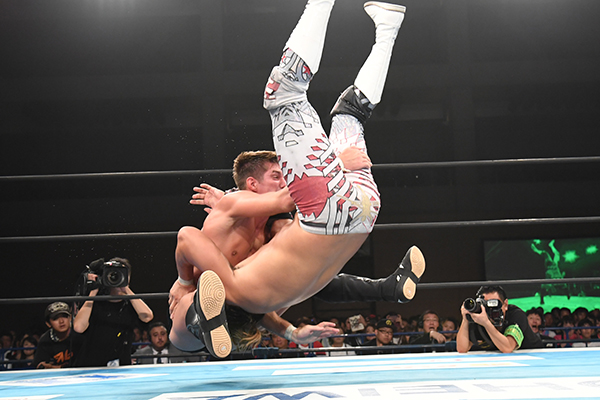 A series of flash pin attempts from Tanahashi did register two counts but not three; moments later however, as both men jockeyed for a Cobra Twist, Sabre cradled the Ace for a pinfall victory. 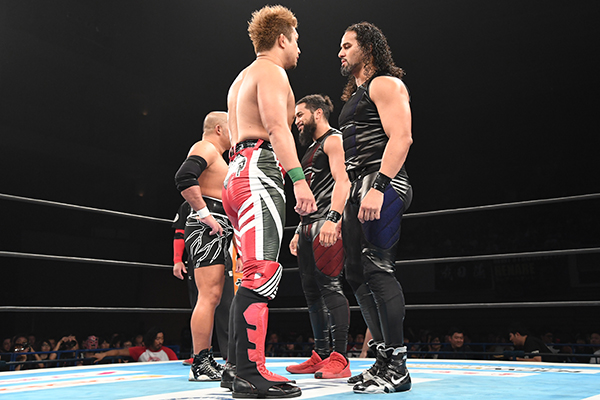 Ishii and Tonga started at a high pace opposite one another, and when Loa tried to get involved from the apron, YOSHI-ASHI responded in kind as all four men entered the ring. Double dropkicks would give GoD the upper hand, and the fight then spilled to the floor.

Once in control of the match, Tonga slowed the pace right down on Ishii, who struggled to get back into the match. Whenever the Stone Pitbull attempted  to get back into the flow, Loa and Tonga would quickly and firmly shut him down, sucking the air out of the Beppu crowd as effectively as it was removed from Ishii’s lungs with a firm Loa chinlock and a pair of slingshot sentons. 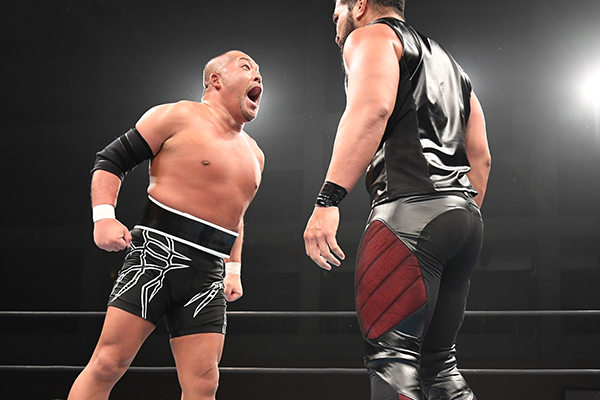 Ishii would finally turn the number game to his advantage as he teed off on both GoD members before YOSHI-HASHI came in with a ton of momentum and dropkicks to both tag champions. A double team suplex attempt saw Loa show his tenacity however, as he popped up to lariat both Ishii and YOSHI-HASHI.

The champions would  again take control on Ishii, who took blow after blow from both Loa and Tonga, but refused to be beaten. YOSHI-HASHI would make his way back into the ring to open the door for a heavy German suplex to Loa, followed by a lariat for a near two.

At the 15 minute mark, YOSHI-HASHI was legal with Tonga, and the pace once again quickened as the Headhunter scored with a hurricanrana. All four men would hit the ring, with Tama Tonga delivering Tongan Twists to both his challengers, before he and his brother hit a devastating pair of top rope maneuvers to YOSHI-HASHI. 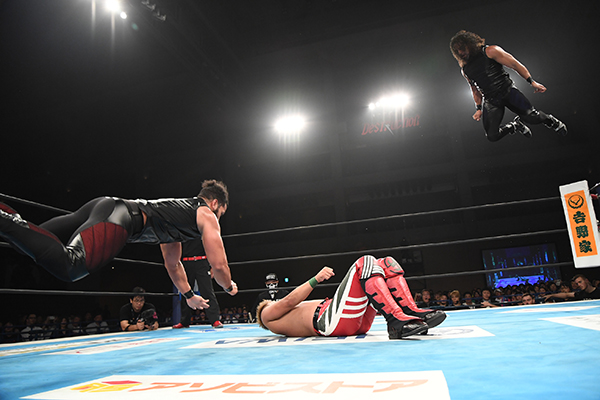 The champions would connect with the same Guerrilla Warfare that saw them retain against YOSHI-HASHI and Ishii in 2016, but this time, YOSHI-HASHI kicked out. When Ishii cut off a follow up super powerbomb, YOSHI-HASHI seemed to have the match sewn up with a Butterfly Lock.

The referee would be taken out, but a chance for BULLET CLUB to take the win was squandered when YOSHI-HASHI cut off Jado and his kendo stick. Ishii would hit a massive powerbomb as the ref came to for a two count, and Kumagoroshi followed, with Tonga kicking out at the last possible millisecond.

With the match in the challengers’ grasp, KENTA hit the ring. A distracted YOSHI-HASHI couldn’t see Tonga coming from behind, and a schoolboy would secure victory. 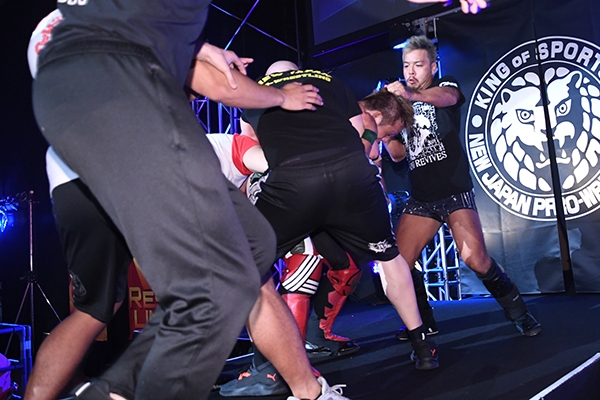 Post match, KENTA would brawl with both YOSHI-HASHI and Ishii at ringside until Young Lions restored some semblance of order. 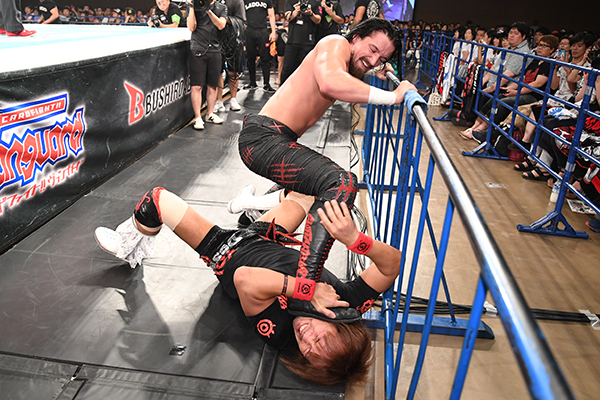 As we often saw in the early stages of the Destruction tour, Naito took control on White’s partner early in the ring, before BULLET CLUB got the edge on the floor, a decidedly non tranquilo White bringing Naito head first into the walls of the B-Con plaza.

Back in ring, Owens and White took over on EVIL until a Fisherman’s Buster from EVIL brought a tag on both sides. A hesitation from Naito saw the Switchblade send El Ingobernable into the guardrail, but soon after Naito turned the table with similarly amoral offense before posing to the crowd. 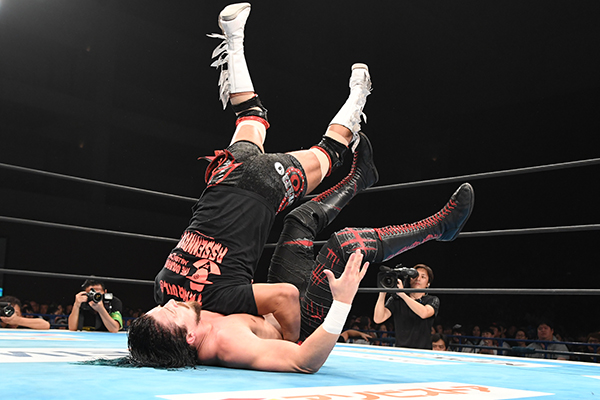 A DDT from White however, gave control to he and Owens. The Crown Jewel almost scored with the Package Piledriver on Naito, but EVIL made the save. Soon after, a Destono connected to Owens as El Ingobernable once again frustrated BULLET CLUB. 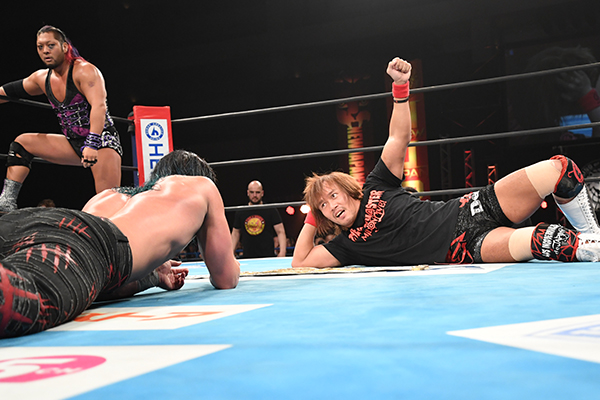 Post match, Naito would attack Gedo at ringside before again rubbing his victory in Jay White’s face, sending a message ahead of their Kobe meeting on September 22. 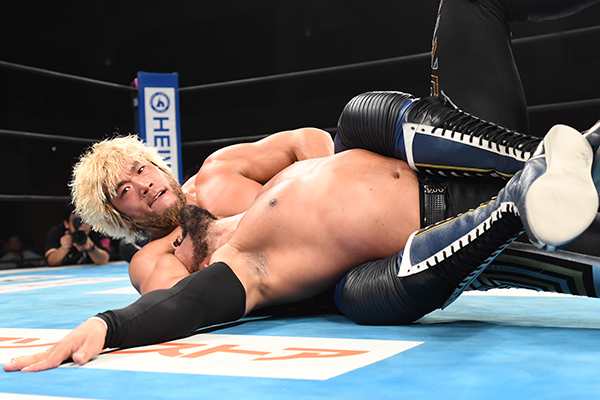 Takagi and Goto would charge at one another in the early going, with a frenzied pace to strikes and takedowns before Takagi took a slight edge and tagged in BUSHI. CHAOS would take control on LIJ’s masked man and effectively isolated BUSHI.

It was against Okada that BUSHI finally created enough room to make a tag, and he did so to number one contender SANADA. Cold Skull would quickly cinch in the Paradise Lock on Okada. An Okada flapjack would bring in Romero, who got the Forever Clothesline count stopped at two by SANADA, and LIJ numbers caught up with him.

Goto would break things up for CHAOS, scrapping with Shingo and landing an Ushigoroshi as the match broke down. SANADA popped Okada up into a TKO to boot, but it was Romero legal, catching some tough kicks flush to SANADA’s face. A Skull End would prove to be the receipt for Mr. Azucar however and a submission victory would follow for LIJ. 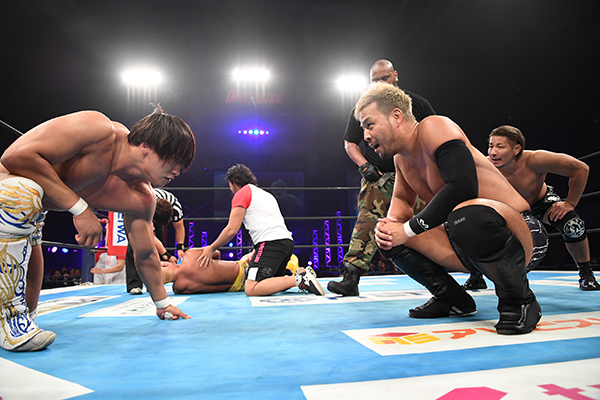 BULLET CLUB attacked early, but it was the Birds of Prey who had the IWGP Junior Tag champions sweating early with feints and then dives to the floor. Fale would pull Eagles out to the floor however, where BULLET CLUB took control, with even Gino Gambino getting involved from the announce desk with a chop.

Eagles would be able to tag in the powerhouse Makabe, who teed off on both Yujiro and Fale, dumping the Wrestling General to the floor before getting two off a Northern Lights Suplex. Ibushi would enjoy the upper hand for a time on KENTA as well, but when the G1 winner tagged in Honma, BULLET CLUB took over. After a train of attacks in the corner, a Go2Sleep sealed the deal. 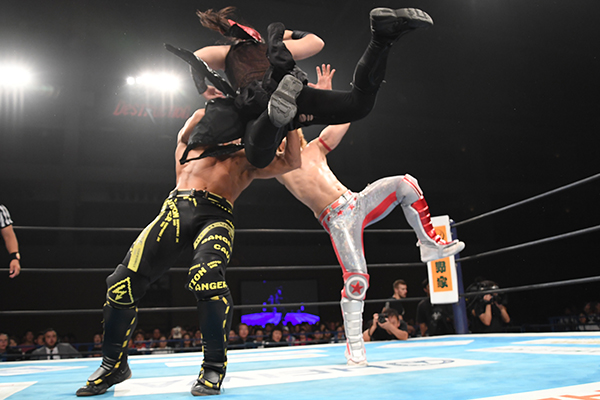 As expected, Suzuki went right after Liger on the floor as the bell rang, with Kanemaru sending YOH into the guardrail before bring him into the ring. There they did not stay, and all six would soon be brawling on the floor with Suzuki-Gun in control.

When YOH was being punished by a Suzuki double wrist lock, Liger would enter the ring of his own accord, leading to chaotic scenes once more as he paid the price with a chair shot from the self-proclaimed King. Liger would eventually receive a tag from YOH, and charged right at Suzuki; Suzuki would target Liger’s mask before a shotei palm strike could bring in SHO.

DOUKI would counter a SHO Powerbreaker into an impressive llave cradle, but it was only good for two before YOH re-entered and a 3K secured the win.

Post match, Suzuki again assaulted Liger and tried to remove his mask, before being pulled off by Young Lions who quickly paid the price for their impudence. As Suzuki finally left, Liger challenged him to come in the ring and have their singles match right there in Beppu, but Suzuki backed off with a sadistic smile etched on his face. 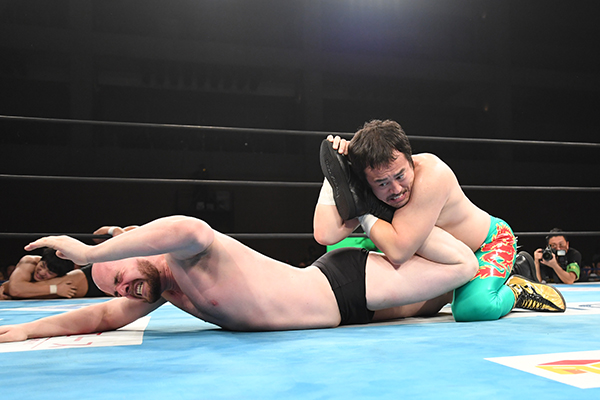 Narita and Connors, both set to meet in the last day of Young Lion Cup action in Kobe battled early, before tags were made to Uemura and Henare, who showed his power and experience edge from the outset.

Henare and Nakanishi, (who have teamed together in the World Tag League in the past) worked together effectively, and motivated their Young Lions to dominate Uemura. Uemura was able to create enough distance to tag Narita back in, and when it seemed he would be crushed by the wall that is Nakanishi, the Young Lion landed a huge bodyslam to bring in Nagata.

Nagata escaped an Argentine backbreaker and landed an exploder suplex to bring in Taguchi, who cleaned house in unclean fashion before Nakanishi cut off a string of hip attacks. Richards would be left in the ring with the Coach. Richards got in some impressive shots, but Taguchi would lock in Oh My and Garankle, a hold the Fale Dojo student couldn’t resist for long.

The evening started off with a pair of Young Lion Cup matches. 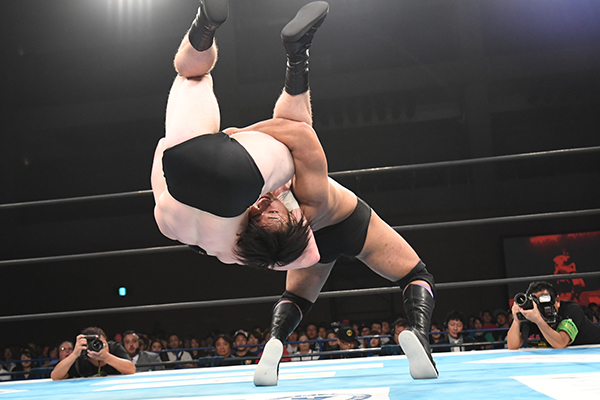 Umino and Coughlin were evenly matched for the first couple of minutes both on the mat and in colliding shoulder charges, but Umino’s tackle eventually proved stronger. The advantage didn’t last long however, as Coughlin pressured Umino into the corner and set to work with stomps before hip tossing Umino out.

Coughlin would follow with chops to Umino that rang through the B-Con Plaza, but Umino withstood the American’s punishment, landing a vertical suplex before a string of running attacks and a missile dropkick. Coughlin responded with a dropkick of his own, and an impressive gutwrench suplex, before a Boston Crab punished the  NJPW Dojo prospect.

Umino gutted out the punishment however. After more harsh chop exchanges, Umino got free with a big dropkick and second missile kick from the top rope. a Fisherman’s Suplex then moved Umino to eight points. 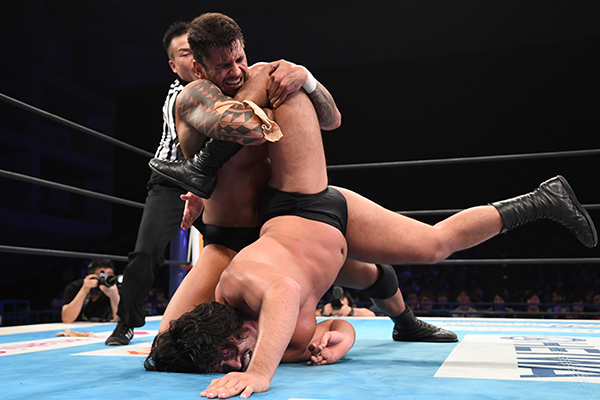 Fredericks used his height to muscle Tsuji into the ropes in the first two seconds, and arrogantly patted the younger Tsuji on the head when told to break, leading to a violent riposte from Tsuji and control with a headlock from the former American footballer. Tsuji refused to be budged from his gameplan, and even when Fredericks created distance, shooting Tsuji into the ropes, the bigger man blocked a hip toss before targeting Fredericks’ hurt right shoulder, adopting a double wristlock.

Fredericks was able to get moving with a dropkick just past the five minute mark, and followed with a corner splash and elbow drop for a two count. Shortly after, his deep half Boston Crab led to a Fredericks victory.