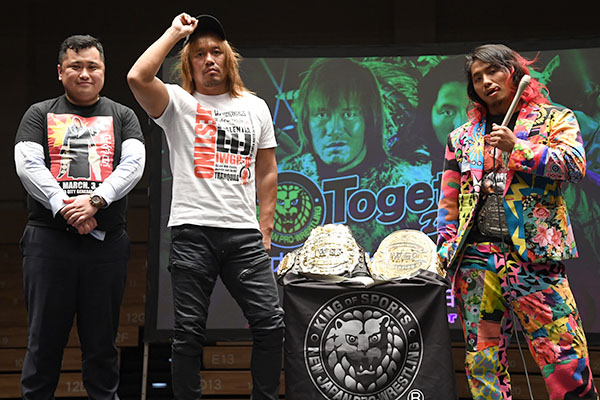 A subtitled version of this broadcast will be available on NJPW World soon!

Announced last week, the NJPW Together Project is now well and truly underway. With 11 events and nine live broadcasts cancelled between March 1 and 14, NJPW Together is bringing new content to NJPW World every day, with live talk show sessions to never before sees archival content, to classic documentaries being made available in English for the first time.

Our first live event went down on Wednesday March 4, with Yohei Onishi of TV Asahi having the unenviable task of presiding over a Tetsuya Naito and Hiromu Takahashi talk show. 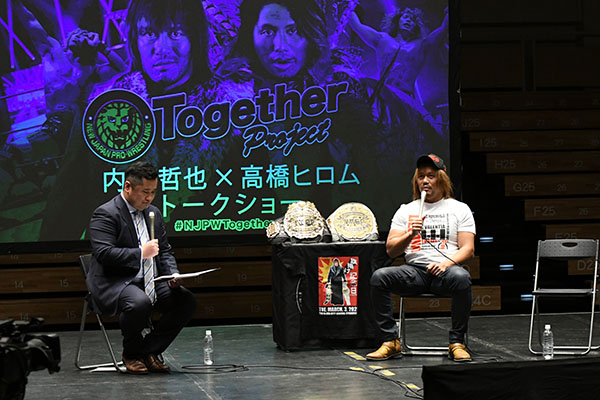 It all started sensibly enough, with Naito talking to Onishi, and stating ‘a lot of people are being affected negatively by the Coronavirus at the moment. I hope tonight we can take an hour or two of people’s time, make them smile and forget about their troubles’. At this early juncture, however, Hiromu was conspicuous by his absence. When he roared into Korakuen Hall, things took somewhat of a dramatic turn. 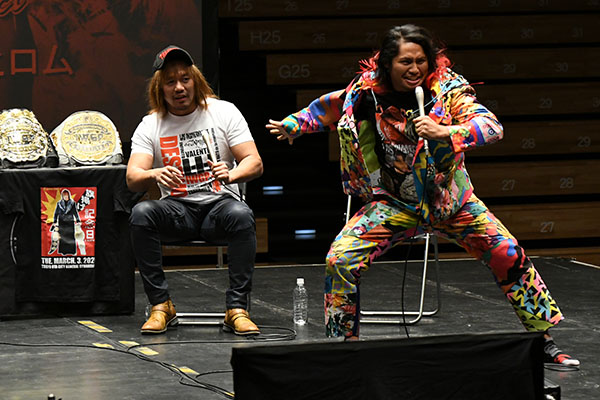 Hiromu cut an impassioned promo against the meddling virus that has inconvenienced and caused grief to so many, especially those who brought tickets to see him and Naito wrestle at the cancelled Anniversary Event. Takahashi then appealed to everybody to do what they could together to prevent the spread of the disease, with ‘HEALTHY! HEALTHY! WASH YOUR HANDS AND GARGLE!’ becoming a rallying cry that even Onishi got involved in. 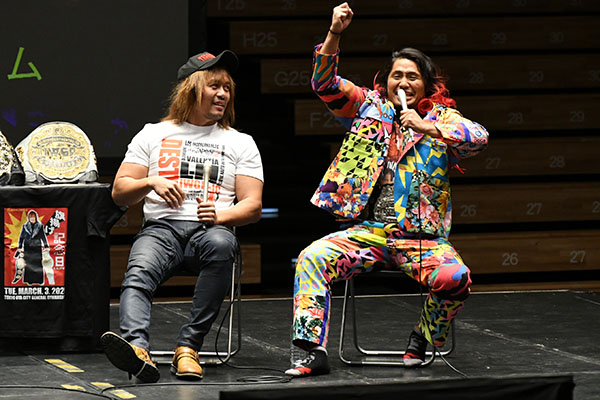 The last time Naito and Takahashi had live mics and a live NJPW World broadcast, way back in 2017, monkey business was the order of the day, as Naito had ‘discovered’ how to turn Hiromu into a monkey by clapping his hands (watch that classic broadcast with English subtitles!). The magic touch seemed to have left Naito in the intervening years, but Hiromu had ‘in a very far away forest’ gained the ability to ‘turn himself invisible’ by snapping his fingers. 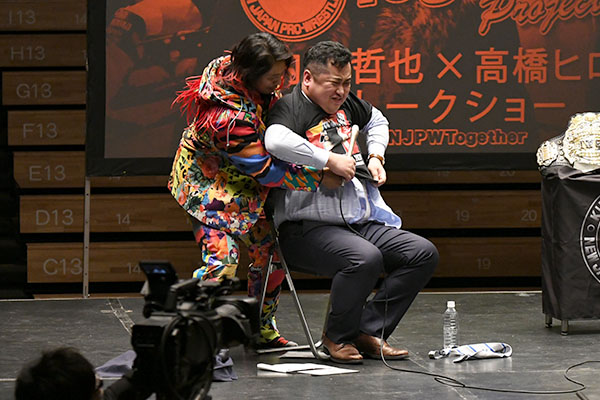 While the cameras clearly picked up Takahashi’s ensuing antics, Naito did explain that he was invisible to the naked eye in the venue. This led to Hiromu getting away with traumatizing Onishi, and later, when he arrived to commentate on past matches, NJPW World broadcaster and Tokyo Sports journalist, Yusuke Okamoto. 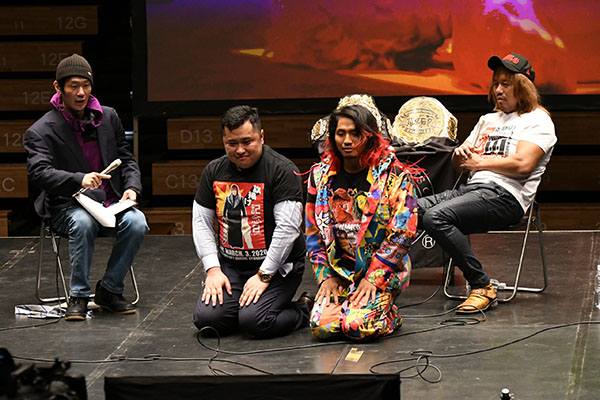 The antics somewhat upstaged action relayed on screen, despite classic bouts including Hiromu Takahashi (as Kamaitachi) against Ryu Lee, and Kazuchika Okada’s first ever title defence against Naito. Hiromu did settle down enough to take some fan questions, with Naito eventually admitting he appreciated Hiromu’s ‘stubbornness’ as his best character trait,  while Takahashi revealed that he is dedicated to putting all his energy into his own career, and has never considered training someone else in the same way that Naito trained him. 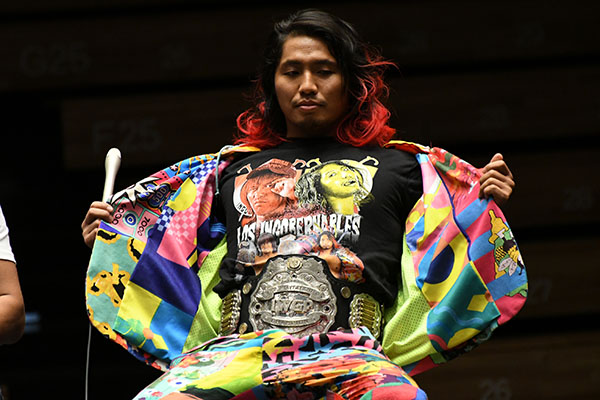 Still, the madcap energy continued, as for the first time ever, Mr. Belt was able to ‘talk’ with the saucy Mr. Intercontinental and the somewhat aloof Mr. IWGP Heavy in a particularly revealing segment. 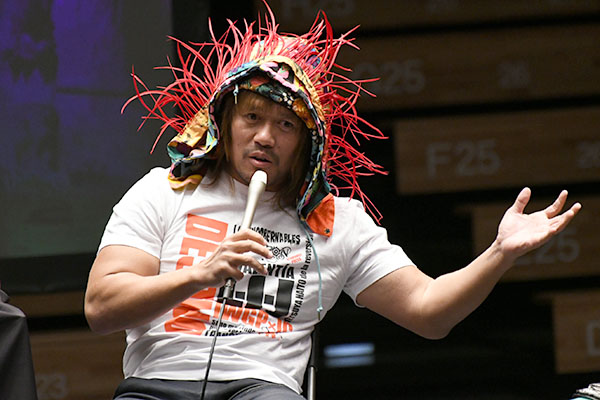 Despite Hiromu’s best efforts to filibuster his closing address into making the broadcast last forever, the show did eventually come to an end, with smiles undeniably being put on faces in what has to be an enduring moment in NJPW World history. There’s plenty more still to come from NJPW Together, so keep checking NJPW World through March until in-ring action resumes! 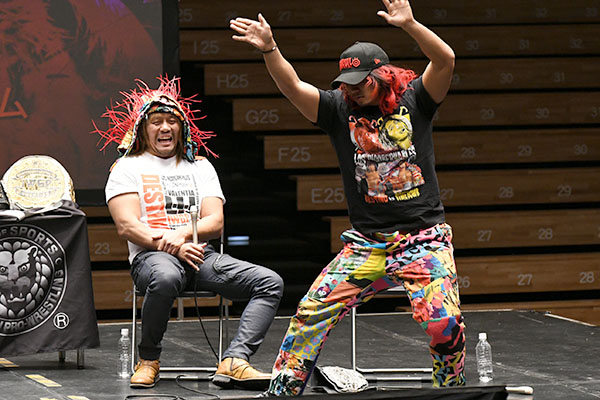