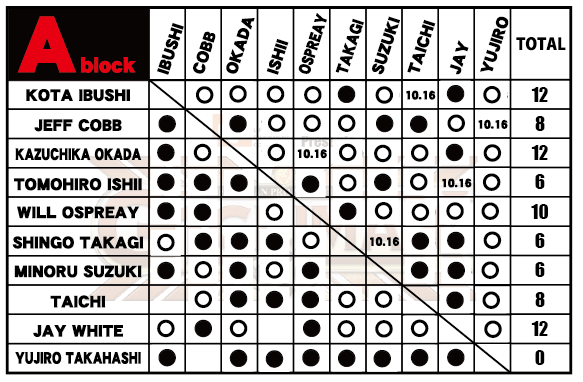 After the penultimate night of A Block action in G1 Climax 30, Kazuchika Okada, Kota Ibushi and Jay White sat at the top of the table with 12 points while Yujiro Takahashi remained dead last with zero. 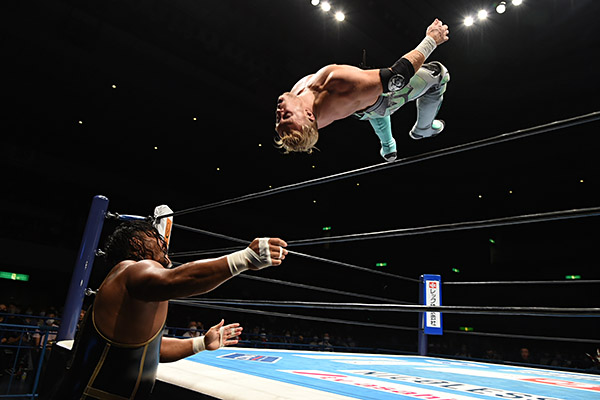 Group action started with Jeff Cobb, fresh off his win over Tomohiro Ishii in Osaka, taking on Will Ospreay. Wanting quick revenge for last April in Madison Square Garden, Ospreay exploded out of the blocks with a dropkick to Cobb, and a head scissors whip took the big man to the floor. There Cobb incredibly caught a Sasuke Special attempt and almost powerbombed Ospreay off the apron to the floor but a counter from the Assassin led to the original move connecting. 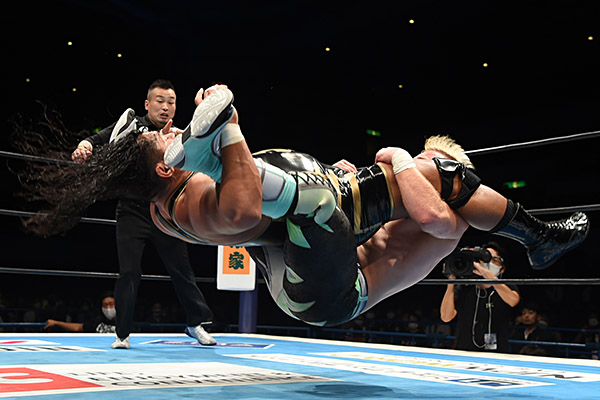 The power of Mr. Athletic soon shone through though, and Cobb launched Ospreay across the ring with a belly to belly in response to a springboard attempt. Toying with Ospreay, Cobb ragdolled his opponent before Ospreay was able to create more distance with a handspring. Using his go to speed, Ospreay avoided a Gachimuchi Moonsault and hit a shooting star for two. An Asiatic spike from Cobb though, and the Gachimuchi connected for Cobb giving him his own near fall. 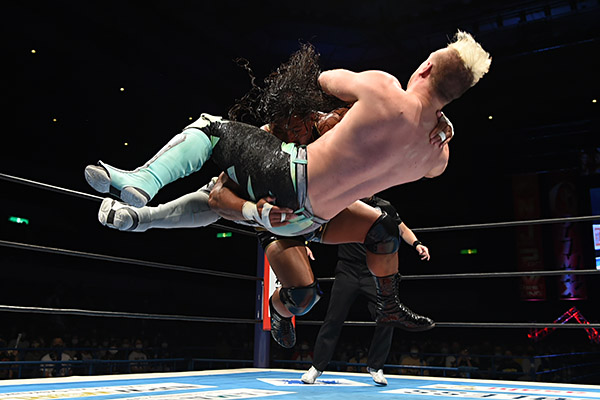 Tour of the Islands wasn’t forthcoming for Cobb, as Ospreay countered into Code Red for two. More high speed counters kept frustrating the Olympian, who was caught with a standing Spanish Fly and springboard 450 for a near fall at the ten minute mark. Cobb prevented an OsCutter attempt though, and hit F5000, but a second counter to the move resulted in Ospreay using the corner to hit the move instead. A Stormbreaker was countered into Croyt’s Wrath and Tour of the islands followed for Cobb’s fourth win. 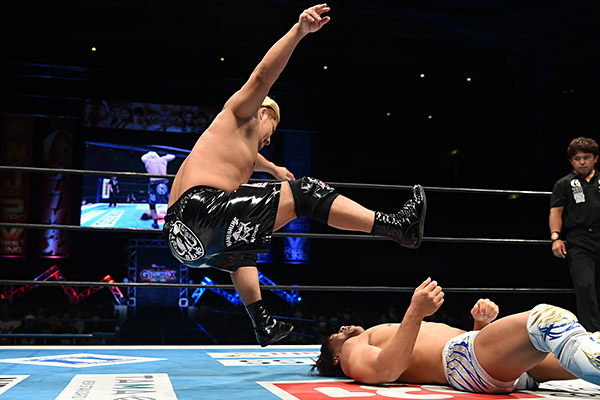 A potential trap game followed for Kota Ibushi, who was facing the winless Yujiro Takahashi. With caution in mind, it was some time before the two firmly locked up, and Yujiro immediately grabbed a handful of hair, but Takahashi still kept his distance before he could catch Ibushi with some snug elbow shots.

Yujiro kept working smart against Ibushi, eating a dropkick but yanking the Golden Star’s heels when he went for a plancha, and delivering a reverse DDT on the floor. Takahashi maintained an impressive level of control, effectively taking Ibushi out of the game until a blinding right foot caught him unawares. 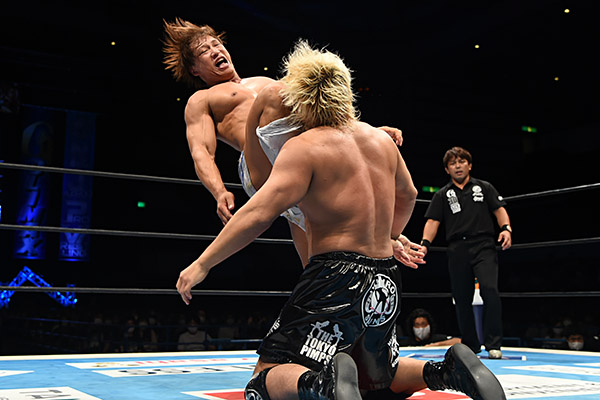 From here Ibushi began to wrestle at his pace, peppering heavy kicks to Yujiro’s chest, but getting caught with a stungun and lariat. A double stomp landed right across Yujiro’s throat when he tried to shoot in on Ibushi, but Takahashi was still able to counter his opponent, stopping the Last Ride to hit an Intercollegiate Slam. A pair of Fisherman’s busters from the top rope and mat level got another nearfall for Yujiro, and although Pimp Juice was escaped, Yujiro countered Kamigoye. For a few seconds at least. A rising knee and Kamigoye connected to put Ibushi to 12. 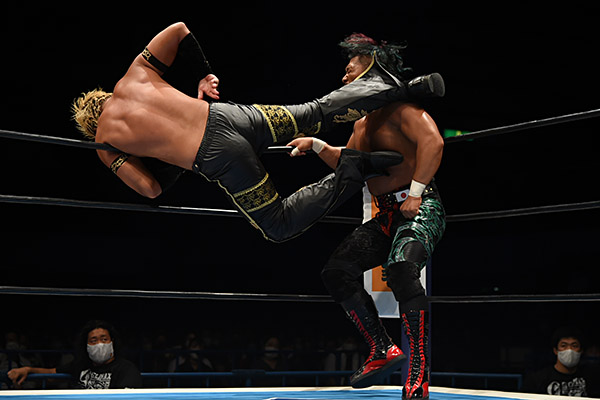 Taichi and Shingo Takagi faced off for the first match back from break, fighting for pride, but also potential positioning after the G1 is over. Taichi got the early upper hand with a thumb to the eye, but Takagi quickly responded, and powerfully so as her bowled his opponent over and sent him rolling to the floor.

It was there though that Taichi found the ring hammer, and used it to take nefarious control of the bout until the Dragon fought back with a backdrop suplex. A Gamengiri found the mark for Taichi though, and both men were put down. Each found their feet, but not for long, as Takagi hit the Ryukon lariat and Noshigami for two. 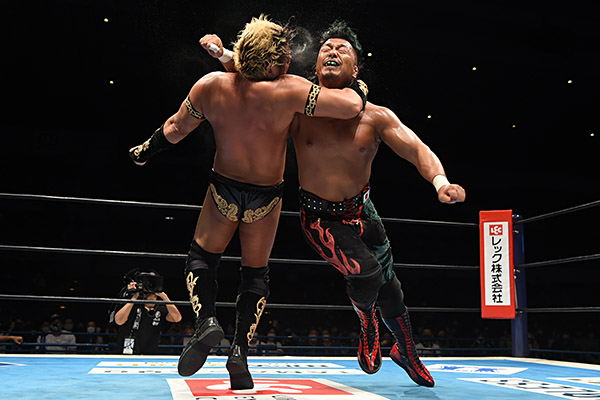 Going nose to nose, Takagi and Taichi traded low kicks and chops; a double chop saw Shingo with the upper hand, but Taichi had a heavy kick in response, and ducked a Pumping Bomber to hit an Ax Bomber instead. The two men collided again and again, before Taichi showed greater awareness, landing a Dangerous Backdrop. 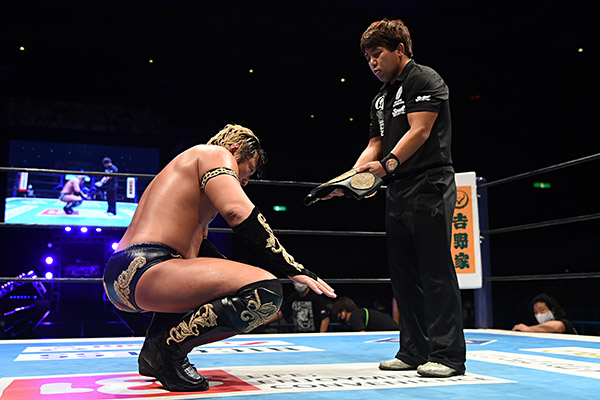 A Taichi style Pumping Bomber followed, and while Takagi fought back, an Ax Bomber was followed by a Gedo Clutch for two. Takagi went to his own big guns though, connecting with Made In Japan, and Pumping Bomber for two. Taichi escaped Last of the Dragon and hit his own version of the move for a nearfall; as both men dug deep into their respective arsenals, Taichi was finally able to get a perfect hit on a superkick, and hit Black Mephisto for the victory. 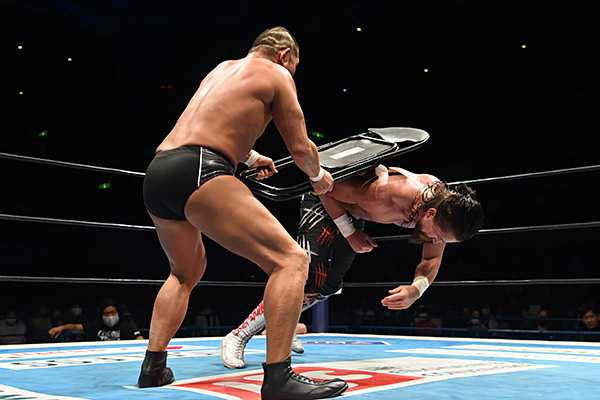 The semi-main event saw Jay White looking to join Ibushi on 12 points as he faced Minoru Suzuki. The cagey White avoided Suzuki early, and tried to throw the King off his game, but when they finally made contact, it was Suzuki coming up with agonizing wrist control. Easily out maneuvering White, Suzuki continued to stretch jay and put the fear of God into Gedo at ringside, but with a death glare to White’s manager, the Switchblade had enough time to attack from behind.

Jay pushed his advantage with a neckbreaker in ring, but only got one counts as Suzuki showed his fury and frustration at the five minute mark. White was able to use arrogance and smarts in equal measure to maintain control, but when he used Gedo to draw the referee, Suzuki was able to stop a chair shot and deliver successive blows of his own. 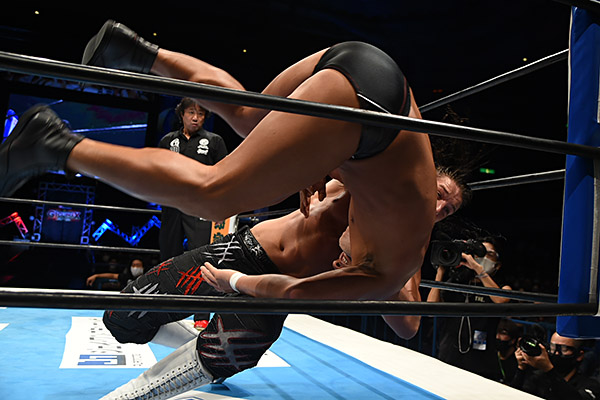 White still had the wherewithal to land a half hatch suplex into the turnbuckles to gain some space, but the King reared back in fearsome form, holding White back for a thudding forearm. The rocked White managed to lash out and find a weakness in the King’s left knee though, and stopped Suzuki’s strikes by going downstairs and connecting with a DDT.

When Suzuki went back to the arm of White, the Switchblade tried to walk away, but got caught by the King outside and taken back to ring center. There Suzuki looked for a sleeper but got caught with a ground Dragon Screw instead. An overconfident attempt at submission though, and White was countered into a heel hook. 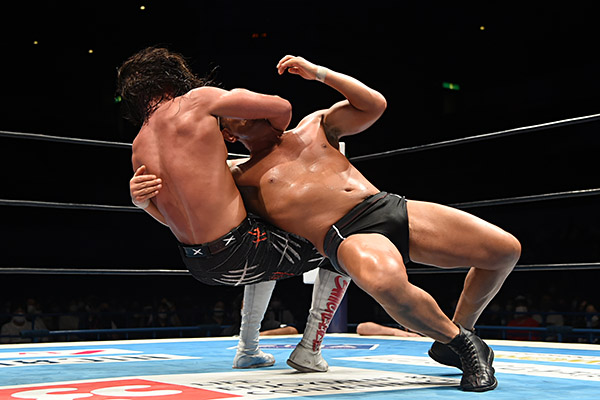 When White made the ropes, Suzuki gave a threatening glare to keep Gedo in his place as he landed a pair of sickening forearms. Before the killing blow, Gedo interjected himself and opened the door to a Bladerunner attempt, but Suzuki countered to an incredible flying armbar, White tapping frantically, but the referee, drawn by Gedo, unaware.

At the 20 minute mark, White again went for Bladerunner, reversed into a sleeper hold. a Gotch Style attempt followed but again Gedo pulled the heel of the referee, and Bladerunner connected for the three. 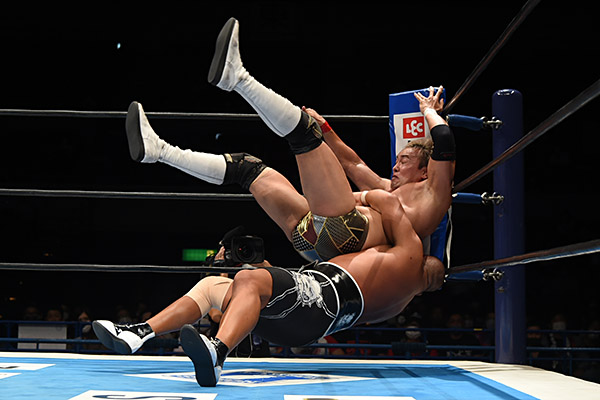 Kazuchika Okada showed early advantage over Tomohiro Ishii in the main event as he had excess power in pushing Ishii to the ropes, and excess speed with an arm drag. Yet after Ishii got space at the five minute mark with a suplex, the Stone Pitbull quickly moved to show he had the edge when it came to strikes. Elbows landed flush to Okada, with one landing right in the throat, and as Okada tried to pick up steam and fire up the crowd, a brutal headbutt doubled him over.

Okada found a crunching DDT at the ten minute point, but mocking blows brought Ishii angrily to his feet and the two threw bombs, Ishii reaching up to crack Okada across the jaw. A charging Ishii was caught by a reverse neckbreaker by Okada, but Ishiis till fired back, hitting a powerslam and roaring in the face of Okada’s elbows before landing a German suplex into the corner. 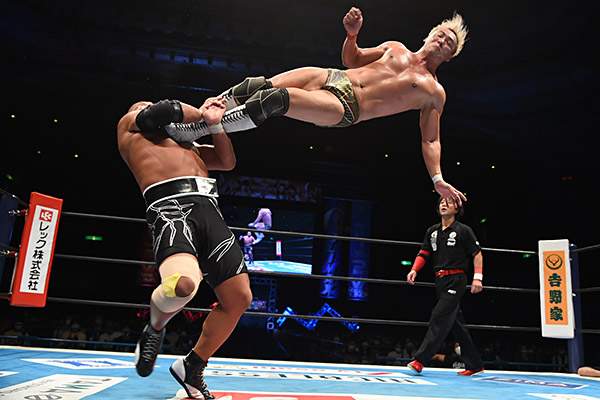 A superplex and elbow combinations followed for Ishii, but Okada had champion’s instincts, meeting a charging Pitbull with a dropkick and then landing a Tombstone to set up the Money Clip. Wounded, and perhaps at his most dangerous as a result, Ishii was able to pitch Okada for a German Suplex on his escape and twice countered Okada’s roll-up pin; Ishii bounced to his feet from an Okada Shotgun dropkick, but Okada evaded a sliding lariat to again attempt Money Clip.

This time though, Ishii chickenwinged the arm of Okada and hit a DDT before navigating a double wrist lock. As the two fought on, Okada looked to land a dropkick to Ishii as he was perched on the top rope, but was swatted away by Ishii who followed with a knee drop to the back of the head. 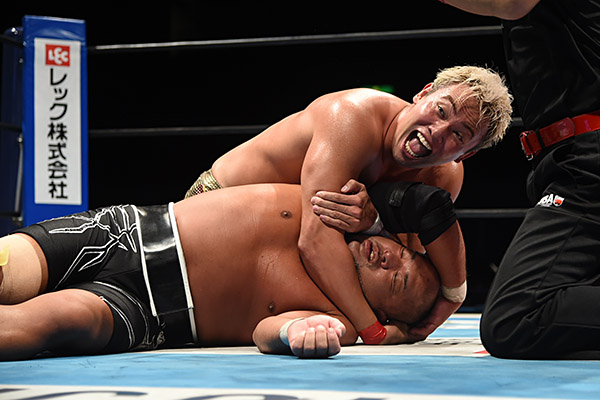 With both men’s necks in a dangerous state, Okada dug down for a corkscrew Tombstone piledriver just past the 20 minute point, and kept wrist control, but this was merely Okada’s prison as he was held captive for repeated headbutts from Ishii until a rolling lariat finally put Ishii down. Again the Money Clip came into play, and again Ishii’s will and skull proved unbreakable, a headbutt landing flush with the Rainmaker’s jaw. 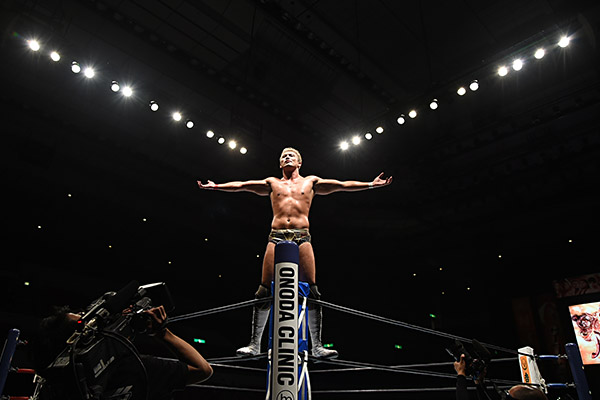 Ishii couldn’t follow with the Vertical Drop Brainbuster, however. As the match passed 25 minutes, Okada landed a short arm lariat and another dropkick before again locking in the Money Clip. Ishii stood, but only long enough to take a neckbreaker; Okada kept the hold in until Ishii slipped into unconsciousness.