Last group action of the tournament in Ryogoku 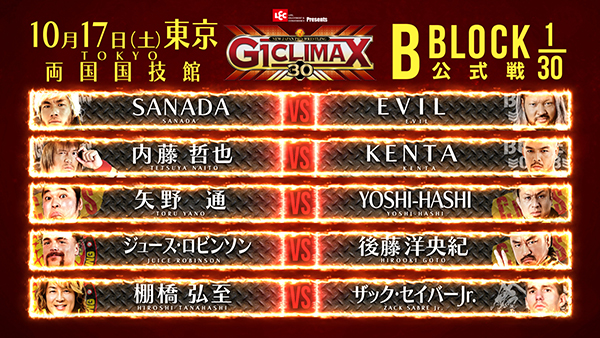 After Friday ngiht sees the A Block winner determined, B Block go to battle for the final time on Saturday October 17, the winner joining Sunday’s all important G1 Climax 30 final.

Watch the B Block finals LIVE with ENGLISH COMMENTARY on NJPW World!

If EVIL wins, he is through to the G1 final. A draw and a Naito loss or draw also puts him in the final.

SANADA must win and have Naito lose.

As EVIL controls his own dark destiny in the G1 final weekend, his match with SANADA headlines the card on October 17. For the King of Darkness, it’s all pretty straightforward; a win over Naito earlier in the league ensures that if he beats SANADA he will be through regardless of other results. Meanwhile SANADA will be in the strange position of supporting KENTA in his bout against Tetsuya Naito; though he cannot make it to the finals on his own, a win over Naito and a potential victory over EVIL here will see him through to Sunday’s final on tiebreaks.

There are, though, a lot of ‘if’s surrounding SANADA. After a slow 0-3 start to his campaign, Cold Skull has performed an incredible hot streak, to surge to 10 points, and has done so all with unshakable focus and characteristic coolness. Even after a pair of main event victories, in his home prefecture of Niigata, and in Yokohama Wednesday night, SANADA has kept his comments to live crowds brief and to assembled backstage media completely nonexistent.

One wonders then what’s playing in his mind as he faces his former tag team partner to World Tag League and IWGP Tag Team Championship glory. When Tetsuya Naito hinted that EVIL was at risk of becoming the bottom ranked heavyweight of Los Ingobernables De Japon, a fire was lit in EVIL that saw him betray all of his connections to the group and join forces with Dick Togo and BULLET CLUB. While his usurpation of the IWGP Heavyweight and intercontinental Championships by turning his back on Naito, the man that called him into the group as his first pareja, stole the headlines, his bonds were perhaps strongest with Cold Skull. Still they were torn asunder in the New Japan Cup semifinal amid a barrage of low blows, steel turnbuckle shots and vicious unrelenting offense.

Yet SANADA has remained radio silent on EVIL’s betrayal, focusing on KOPW2020 over the summer and refusing to speak to press. When it came to EVIL and Naito’s championship rematch at Jingu Stadium on August 29, SANADA counteracted BULLET CLUB interference and dropkicked a chair into EVIL’s face; did he relish the act, or was it delivered with a pang of sadness? Many have argued that SANADA’s lack of outward emotion is what’s preventing the in ring genius of Cold Skull from attaining true main event status. Against his former partner, SANADA may, for the first time, be wrestling with his gut instead of his mind. With Togo’s ringside presence and the probabilities against him, he may have to.

Naito must win and have an EVIL loss or draw in the main event. 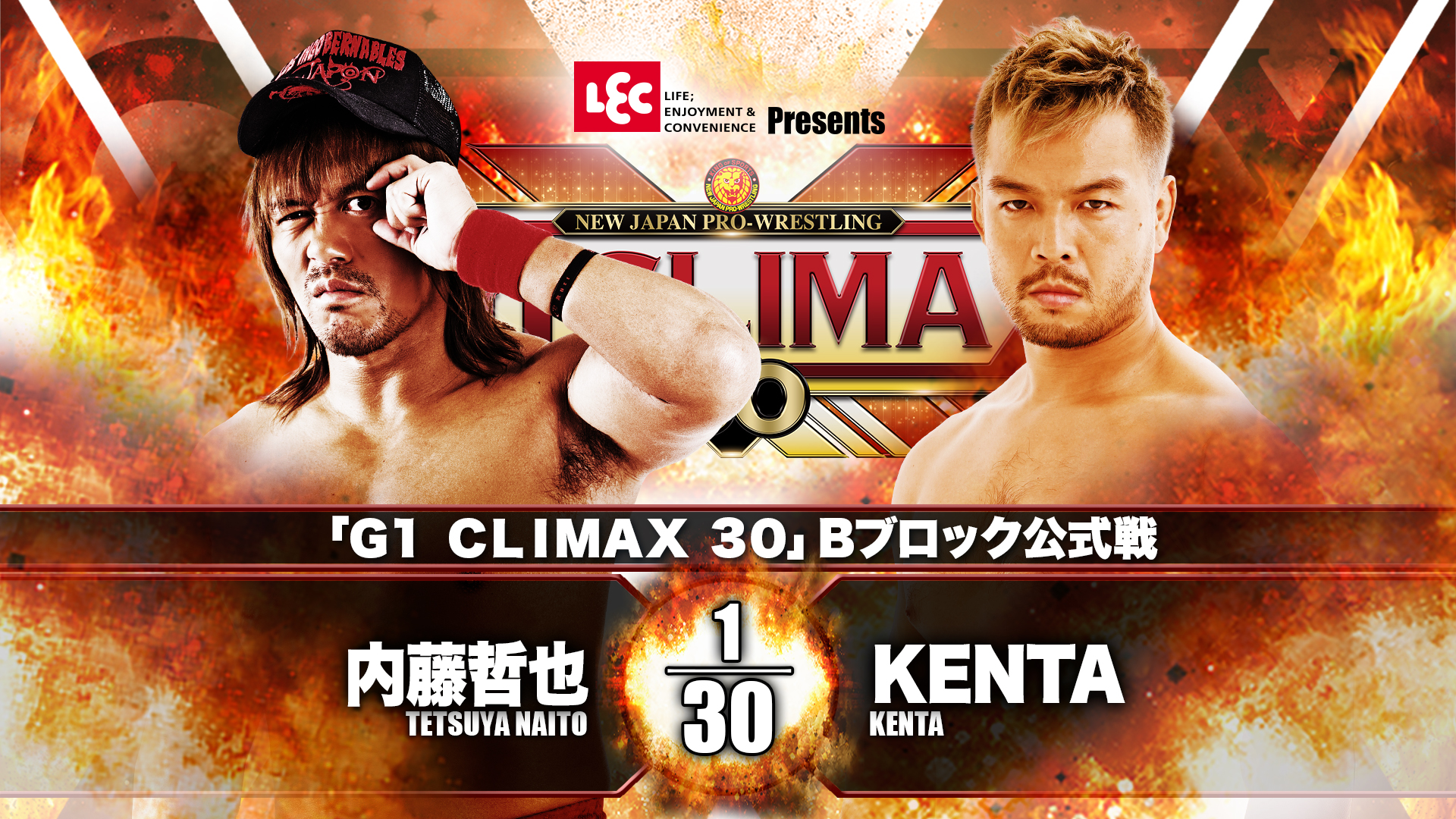 Tetsuya Naito commented before the G1 started that he was disappointed as double IWGP Champion, not to be main eventing on every B Block stop on the tour. As the double champion, ran his argument, every match of his should headline, regardless of opponent. Certainly Naito vs KENTA is a main event in any arena, having sold out Osaka Jo Hall earlier this year at New Beginning in Osaka, but this is the biggest disappointment of them all for EL Ingobernable; owing to his loss to EVIL, Naito is not in direct control of his fate and as such, this match will go second to last.

Circumstances dictate that Naito will be pulling for SANADA in the main event even harder than he would normally, but before that match takes place, he has to get past KENTA. In Osaka this February 9, Naito defeated KENTA, but after 35 minutes and 50 seconds that would render this match a draw under G1 rules, not to mention after a cut to Naito’s head that was gushing blood for the last five minutes.

That title match eight months ago came about because KENTA spoiled a history making moment for Naito. After the very first double IWGP champion was crowned, KENTA assaulted the LIJ leader from behind, and ruined the moment. Now Naito is on the precipice of history again, with the potential for him to become the first IWGP Heavyweight Champion in 20 years, and the first double champion ever, to win the G1 Climax. For KENTA, the chance to ruin another historic achievement is a reward almost greater than the G1 trophy. 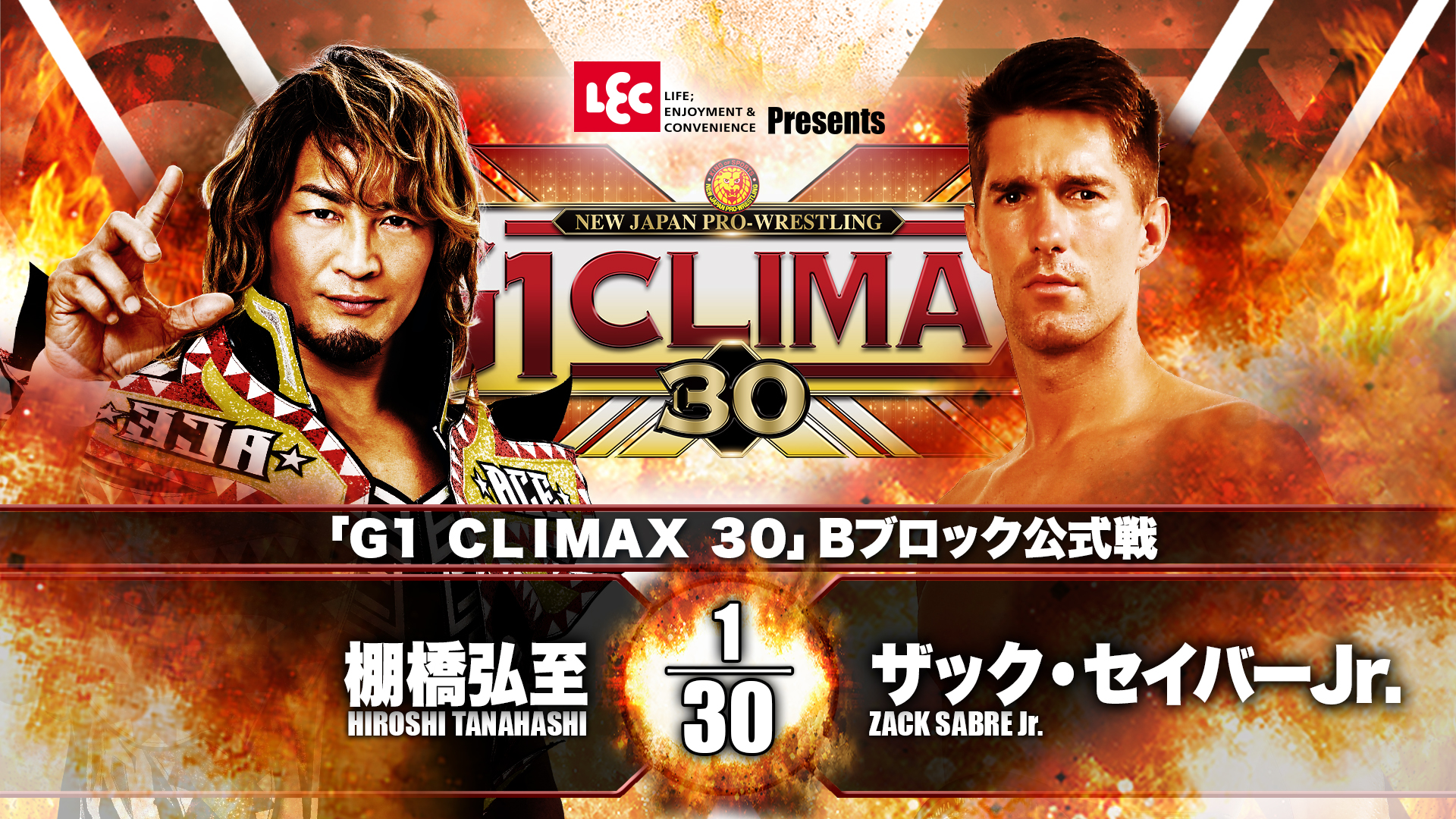 Hiroshi Tanahashi and Zack Sabre Junior meet for the first time in over a year in singles competition in the fourth match on Saturday’s card, but they are very well versed with one another indeed. The lion’s share of their eight singles encounters took place just last year as they battled over the British Heavyweight Championship, and in 2020 their fates have been entwined in tag team action.

That tag action saw Taichi and ZSJ punish Tanahashi again and again as the Ace underwent a summer long crisis of confidence. Now Tanahashi seeks to end his G1 by proving how much growth he’s undertaken through the tournament. And as an added wrinkle, with Kota Ibushi needing to beat Taichi Friday to advance to the G1 finals, could wins for both members of Golden☆Ace send a powerful message to the tag champions with World Tag League 2020 a month away? 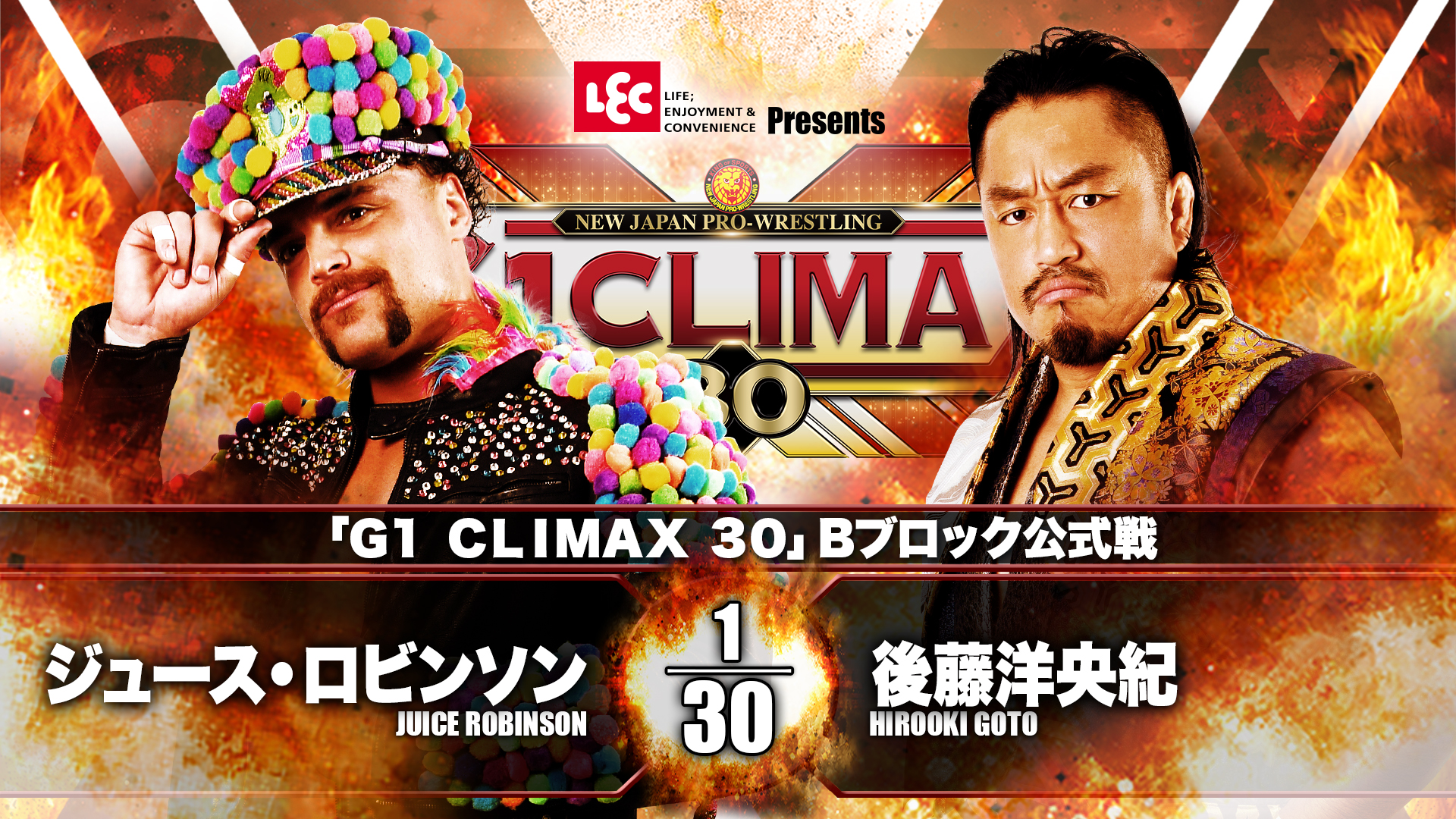 What’s the next step for Juice Robinson? After reinventing himself during isolation and returning with a new look for the G1, Juice fired up crowds and scored three quick victories in the tournament, but since then endured a massive collapse. Keeping himself upbeat with the hope of at least finishing with a personal best of 10 points, that goal too has gone out the window for Robinson.

Juice has abandoned his usual post match comment routine, and has no pre-match words for Saturday where he will be taking on Hirooki Goto. Goto knows all too well what it’s like to push his opponents to their very limit in phenomenal matches only to fall short when the result is rendered. Robsinson will want to at the evry east end his campaign with a win, while Goto will ant his own positive W/L ratio by night’s end. 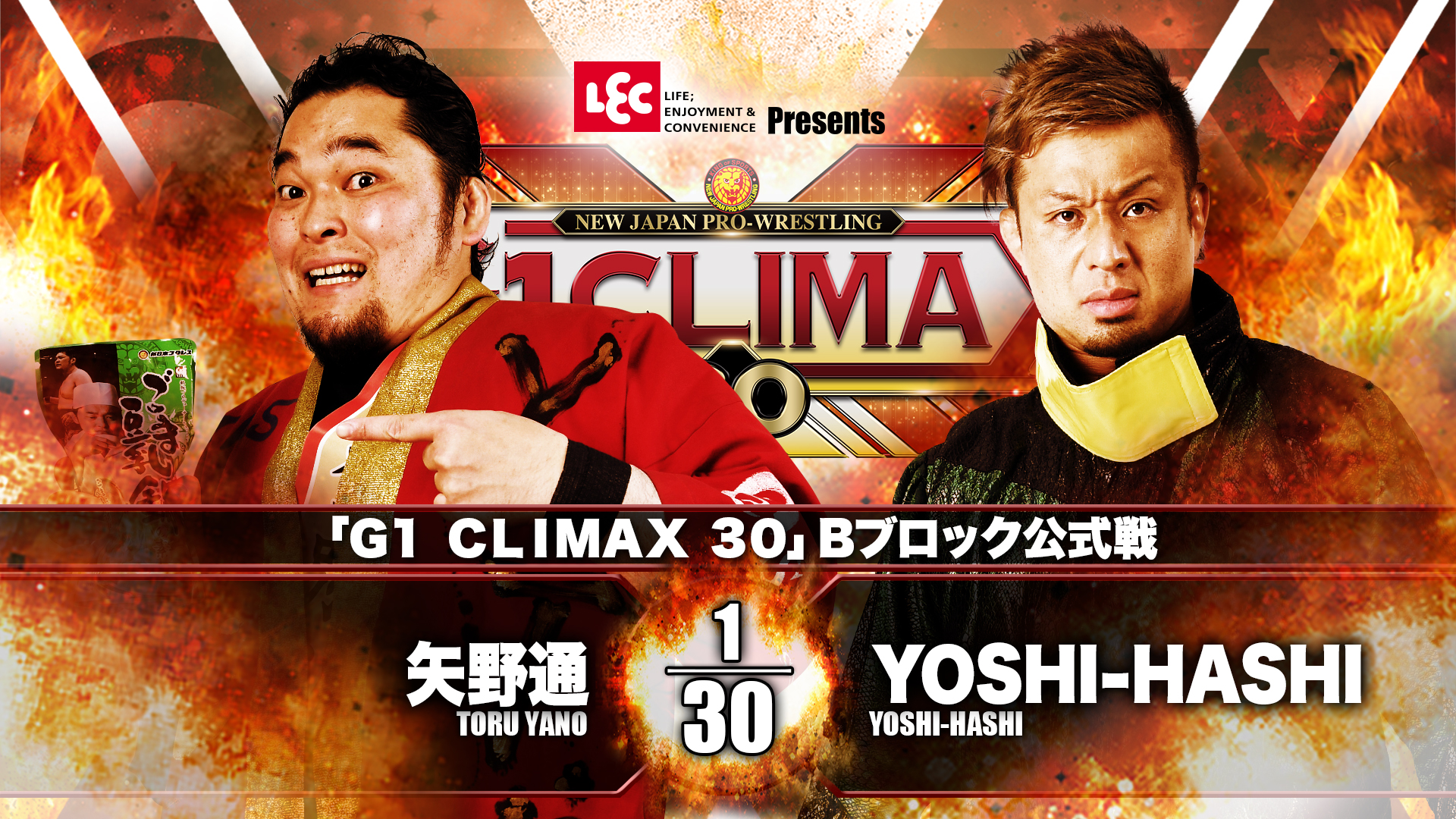 The first group match of the evening sees YOSHI-HASHI hoping to finish his highly spirited and critically acclaimed but largely winless G1 with at least two more points when he faces Toru Yano. The two CHAOS members have wrestled against one another quite a bit over the summer, colliding twice over the NEVER Openweight 6-Man Tag Team Championships, and YOSHI-HASHI wants to show his superiority over Yano one on one. For the master producer however, after a three match hot streak gave way to a massive slump, the need to end his campaign on a high. 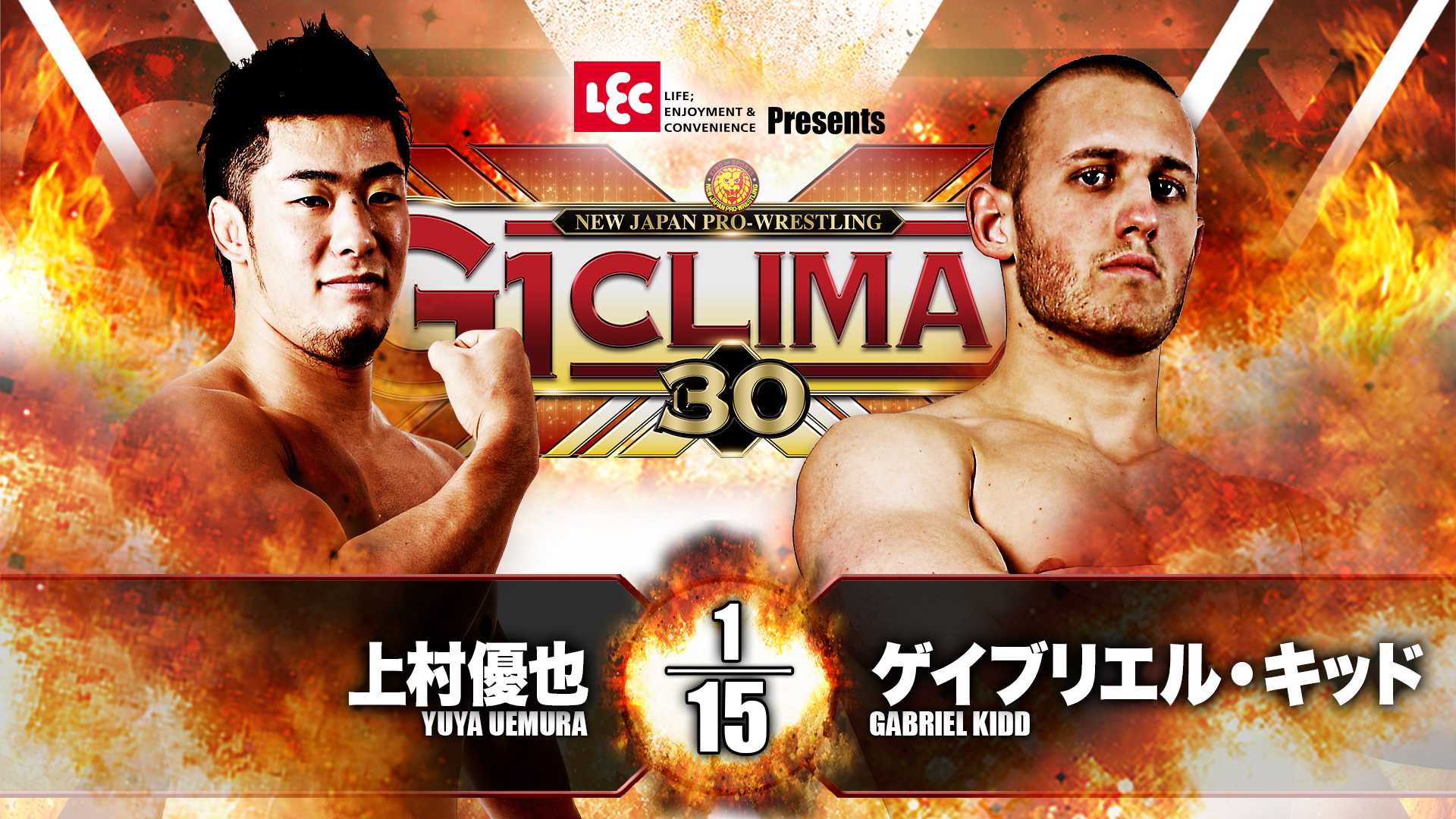 The last announced Young Lion match of the tour sees Yuya Uemura, having fallen to 5-5-1 on the tour with his loss to Yota Tsuji Wednesday, seek to finish his tour strong against Gabriel Kidd. After all three Young Lions have proved equally matched and equally exciting, advancing one another through the entire tour, how will this final match play out?