Road to New Beginning night one card and preview

Watch every event on the New Beginning tour LIVE and in English on NJPW World!

After the events of Wrestle Kingdom 15 and New Year Dash, The Road to New Beginning tour begins Sunday night in Korakuen Hall.

(Note: in light of recent COVID precautions in the Tokyo area, matches will start at the earlier time of 6PM JST) 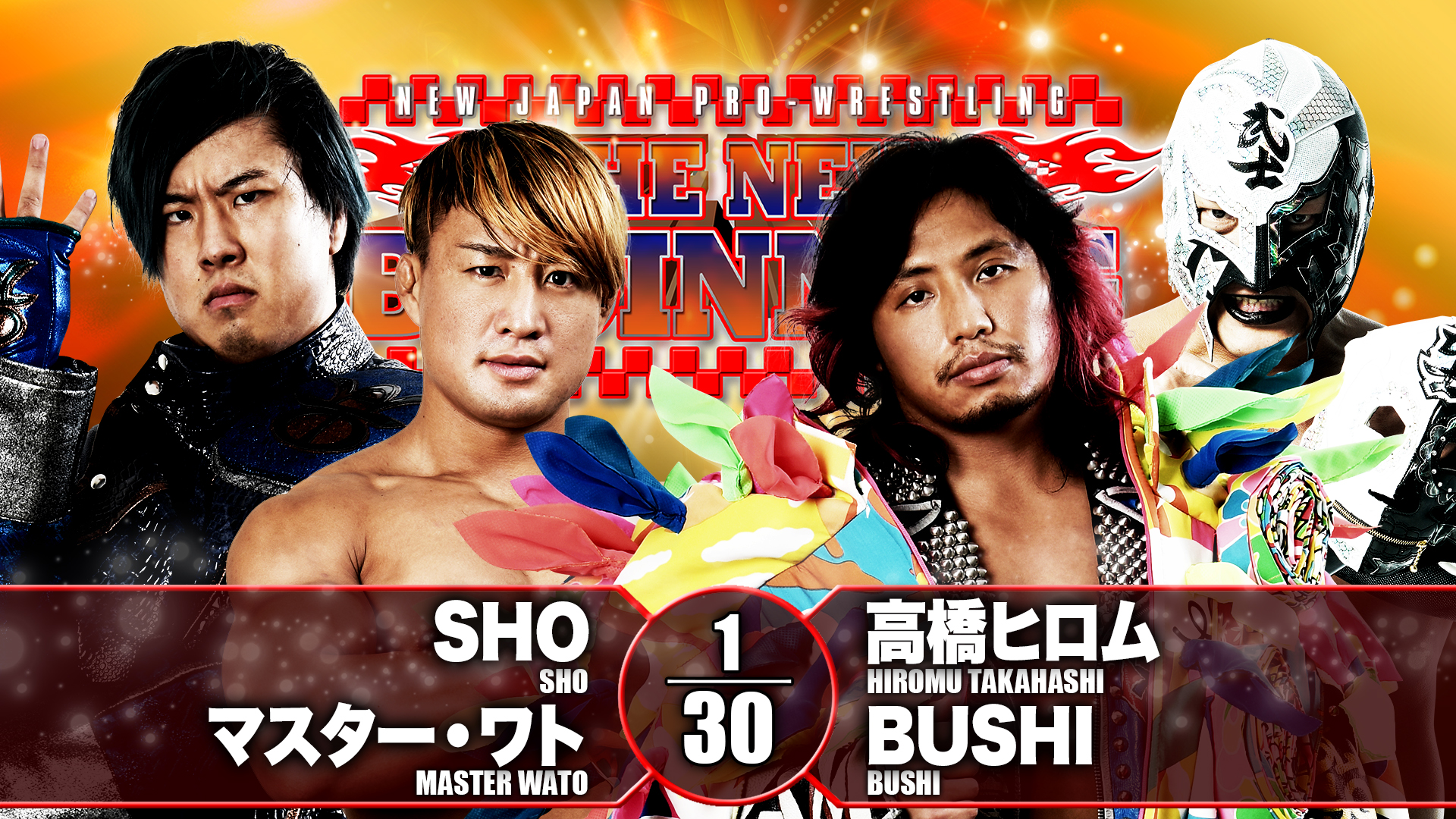 In the main event of the first night of the tour, two big New Beginning singles matches will be previewed when Master Wato teams with Hiroshi Tanahashi to take on BUSHI and Shingo Takagi. At New Year Dash on January 6, BUSHI pinned Master Wato in the main event and laid down an arrogant challenge to the young blue haired sensation, stating that ‘since everyone else in LIJ has plans, and I don’t, I might as well beat you one more time’. Wato will want to show that it’s dangerous to take him lightly in advance of their singles bout on February 10 in Hiroshima.

Speaking of the ‘plans’ in LIJ that BUSHI was referring to, Hiromu Takahashi’s plans are also built around February 10 in Hiroshima, as he is set to face SHO in the main event for the IWGP Jr. Heavyweight Championship. After Hiromu was victorious over first El Phantasmo and then Taiji Ishimori in the Tokyo Dome, he removed all doubt that may be lingering over whether the Time Bomb is the top junior heavyweight in NJPW and the world at large. Yet his loss to SHO during Best of the Super Jr. 27 lingers in his craw, and is something that Takahashi needs to correct. His opponent in Hiroshima will be bringing all the fight to Hiromu to start his 2021 campaign in the most shocking form possible. 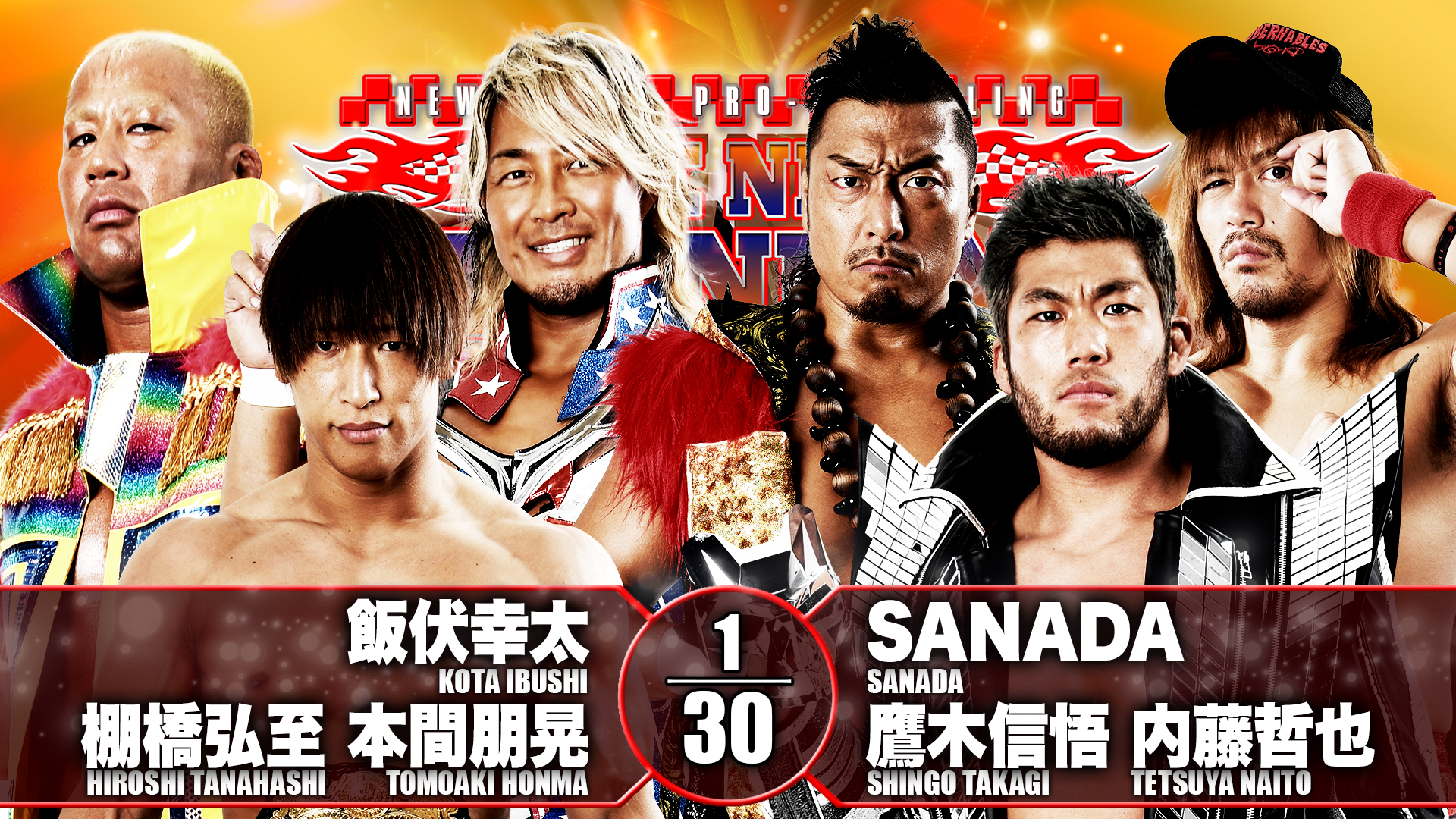 More previews of major New Beginning matchups highlight the fourth match of the evening, as champions and challengers in Nagoya and Hiroshima collide.

The New Beginning tour will culminate in Hiroshima on February 11, where SANADA will challenge Kota Ibushi for the IWGP Heavyweight and Intercontinental Championships. Ibushi’s triumph in the Tokyo Dome on January 5 united the world in awe and appreciation, but SANADA was quick to challenge. Victorious himself over EVIL earlier in the evening, SANADA requested a rematch from the G1 Climax 30 final; a match Cold Skull was within a millisecond of winning in Ryogoku. Glad to put gold and glory on the line, Ibushi accepted the request. Now can SANADA make a key statement at the start of the tour?

Then there’s Shingo Takagi and Hiroshi Tanahashi. When Shingo and Tanahashi met in the World Tag League this year, Shingo expressed disappointment in the Ace, saying he expected more fire from the self proclaimed master of the century. Certainly this bout represents the ‘interesting’ start to the year that Takagi wanted after his war with Jeff Cobb on January 5. Will he bring a different style from the Ace? Or will Tanahashi force Takagi out of his straight ahead brawling wheelhouse? 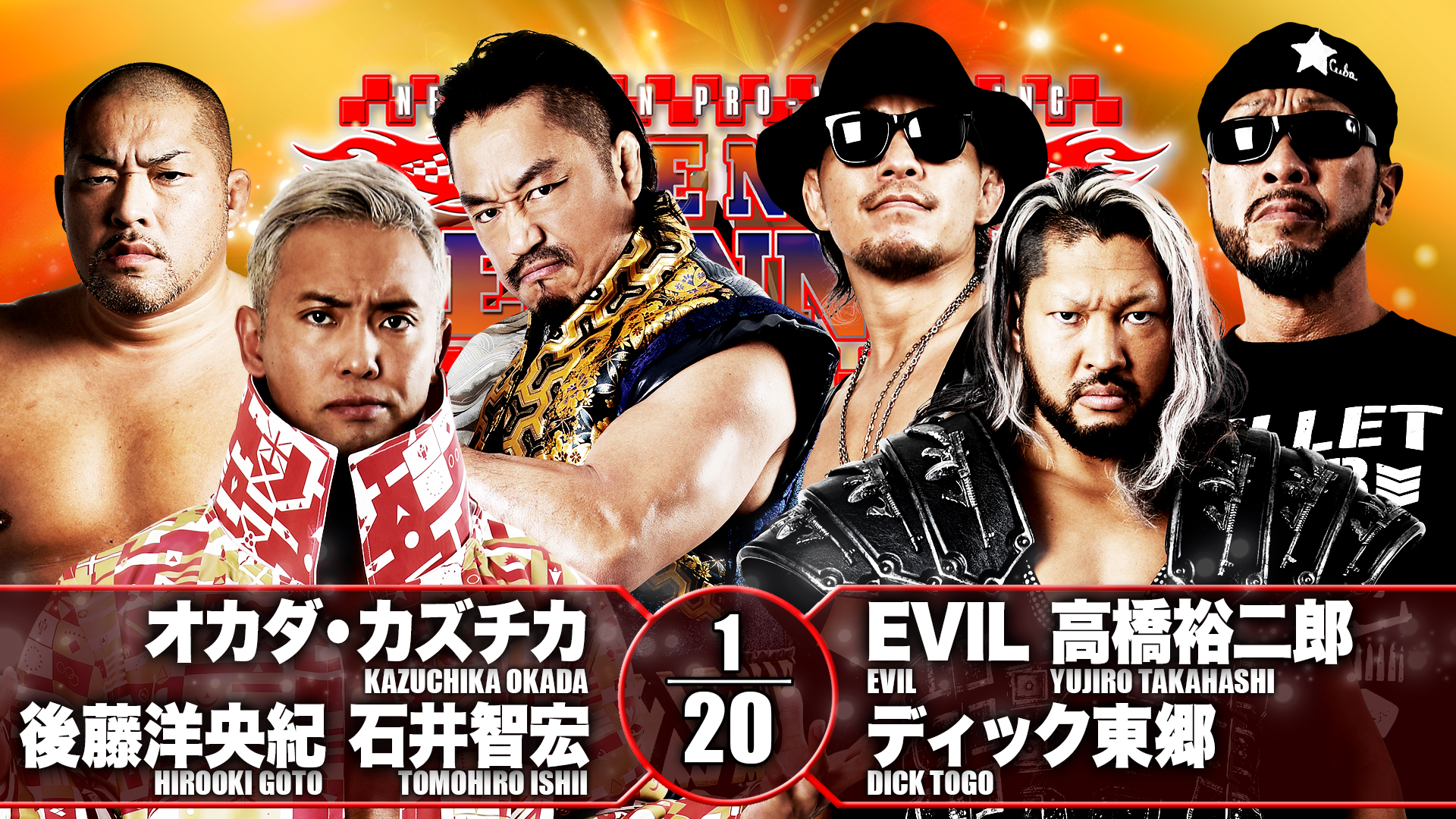 Two thirds of the NEVER Openweight 6-Man Tag Team Champions in Ishii and Goto form a formidable trio indeed with Kazuchika Okada in the thrid match of the evening as they do battle with BULLET CLUB’s EVIL, Yujiro Takahashi and Dick Togo. After an intense battle with Will Ospreay on January 4, Okada emerged victorious. The wrong of Ospreay’s betrayal in Ryogoku last year now righted, the Rainmaker seems set to right another wrong; his loss to EVIL under controversial circumstances in last year’s New Japan Cup final.

A singles match with EVIL is yet to be confirmed, but both men will be looking to make a case for one to be made. Meanwhile, the rest of CHAOS are coming into the Road to New Beginning with momentum high; Tomohiro Ishii having pinned Jay White in the middle of the ring at New Year Dash. What next for Ishii, Goto and tag partner YOSHI-HASHI? We might be closer to some answers tonight. 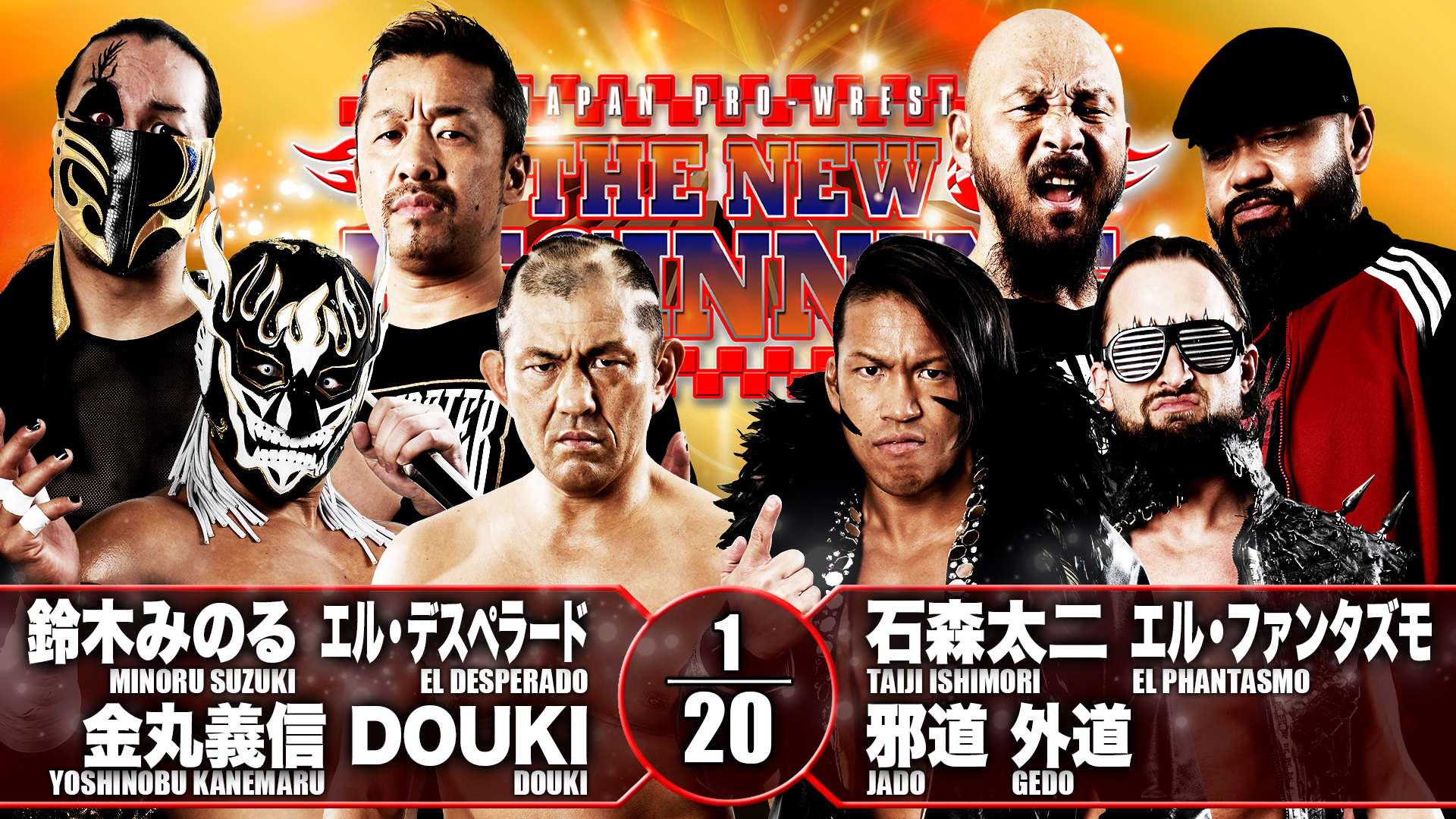 Suzuki Gun and BULLET CLUB collide in the second match of the evening. After a superkick from El Phantasmo rocked Yoshinobu Kanemaru at New year Dash, ELP and Taiji Ishimori instantly moved to challenge the IWGP Junior Heavyweight Tag Team Champions Kanemaru and El Desperado. That match will take place January 23 in Ota, but in the meantime, the champion team will seek revenge, and answers over what they claim to be a loaded boot on the foot of the Super J-Cup winner.

Then, after Minoru Suzuki started his 2021 by laying out the brightest young member of the NJPW roster Yuya Uemura at New year Dash, he moves on to a pair of fellow veterans in Jado and Gedo. Tonight will see a rare opportunity for the legendary Jado and Gedo combination to reform, but do they have enough to counter Suzuki-Gun’s fury? 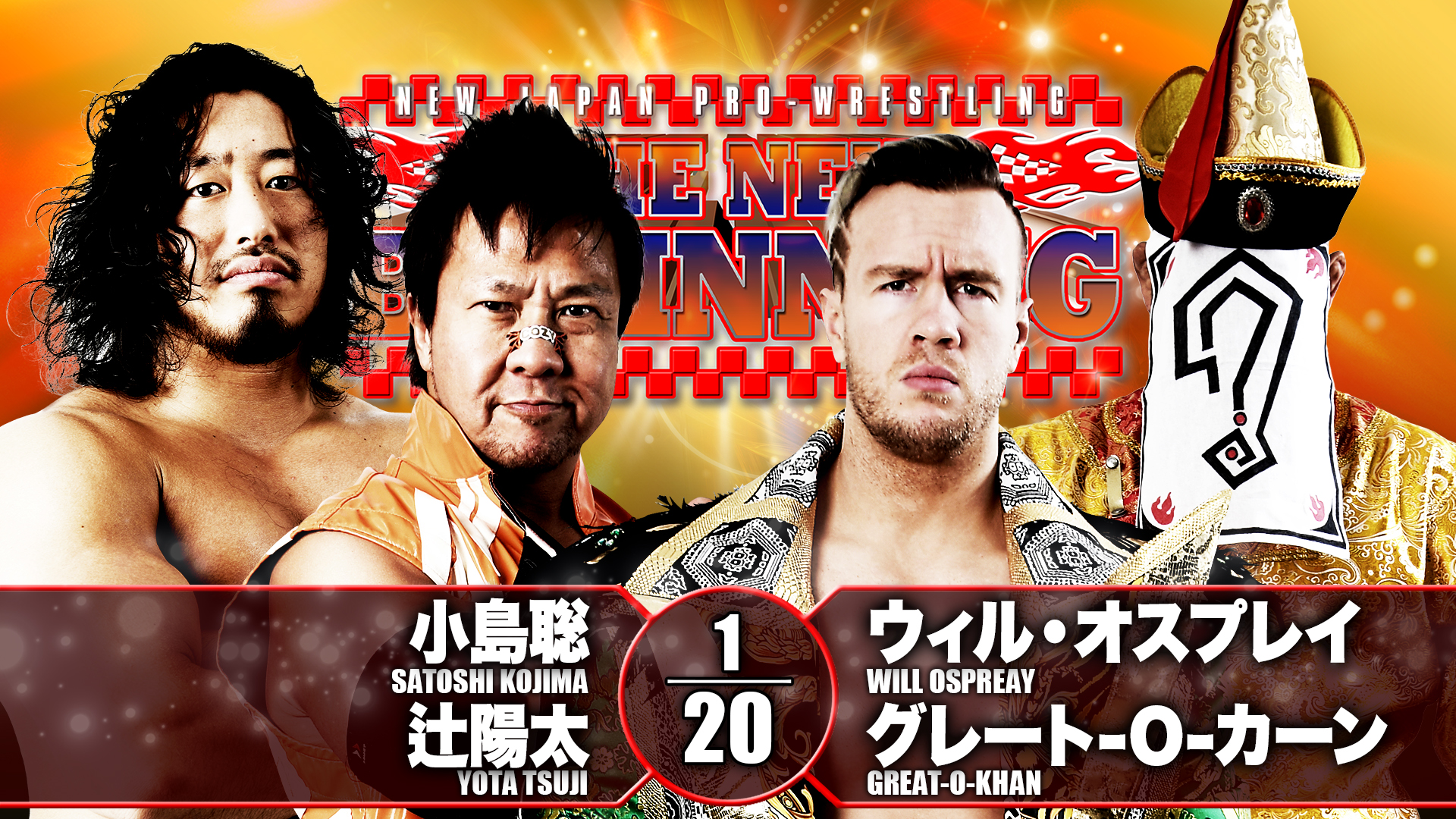 With Will Ospreay taking on Kazuchika Okada, Great-O-Khan facing Hiroshi Tanahashi and Jeff Cobb challenging Shingo Takagi, Wrestle Kingdom 15 was supposed to be a showcase event for NJPW’s newest faction, but it ended in bitter disappointment for UNITED EMPIRE. Furious, and slighted at their position on the card the next night at New Year Dash, the trio pinned Yota Tsuji in a six man tag team match, before Ospreay struck with the Hidden Blade on Satoshi Kojima, and Great-O-Khan landed Hiroyoshi Tenzan’s own TTD to put the veteran on the shelf.

With a furious Kojima vowing violent revenge, how will he and Tsuji bring the fight to their imperious opposition?