Rainmaker, Stormbreaker- Classic ends with a portent of the future 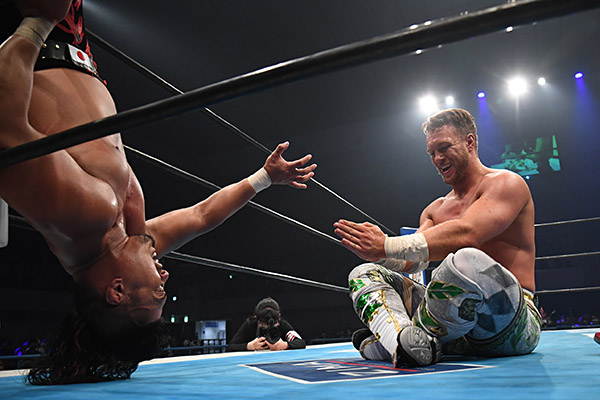 The culmination of the Wrestling Dontaku tour on May 4 saw Will Ospreay defend the IWGP World Heavyweight Championship for the first time in the face of rival Shingo Takagi, seeking the richest prize in wrestling in the very town he made his professional debut.

Though both competitors knew one another full well, the match started with a tense feeling out process, Ospreay showing his ability to send his challenger into the ropes, and to counter a headlock into one of his own, but not to knock Takagi down in the early going. The first strikes were thrown early, Shingo gaining the first knockdown of the match, before Ospreay responded with a boot and the pace quickened toward a standoff and fan applause.

Takagi would score the first big move of the match, a back body drop with high elevation that finally slowed the champion and gave match control to the challenger. Shingo would refuse to allow Ospreay to shift gears, a lariat sending the champion to the floor, where he was sent into the guardrail and apron; when the Briton looked to counter with the same back suplex onto the guardrail that shaped their New Japan Cup meeting, he was reversed and dumped into the apron face first. 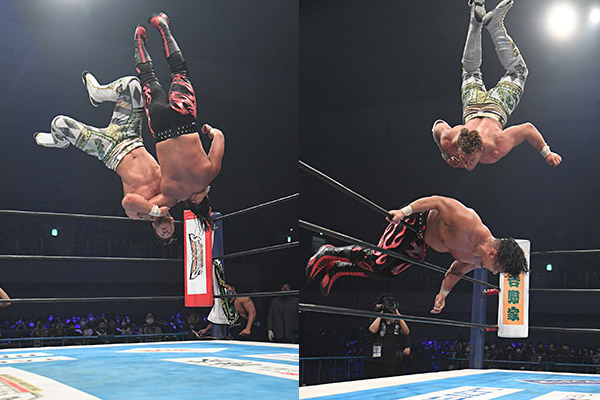 The champion found an answer with a suplex to the apron, before both men reached for tables around ringside. With the hardware setup at ringside, Ospreay and Shingo each avoided a precarious situation before Takagi was brought back inside the hard way, a springboard forearm giving control back to the champion. With a backbreaker as setup, Ospreay sought to inflict on Takagi the same shoulder injury that had shaped his own matches over the last six weeks, a straight arm breaker creating a significant opening.

As his challenger roared in pain, Ospreay set to work with strikes and holds that used every inch of the ring for leverage. When Ospreay brought stepping Kawada kicks to his challenger however, Shingo fired up, and wary that the left shoulder wouldn’t hold up to the Ryukon Lariat, instead used a DDT to drive Ospreay to the mat as the Fukuoka crowd fired up.

A hard suplex followed at the 15 minute mark, and Takagi took Ospreay into the corner with jabs and chops, but Ospreay countered with a hard open right of his own, before a harsh kick to the spine put his challenger into the Tree of Woe. Elevating Takagi back to the center, a reverse Bloody Sunday led to a two count, and a Dragon Screw wasn’t enough to stop Ospreay landing a Street Cutter and then a kick to the left arm that set up a reversion of the Hoverboard Lock, recalling his first matches in NJPW against KUSHIDA. 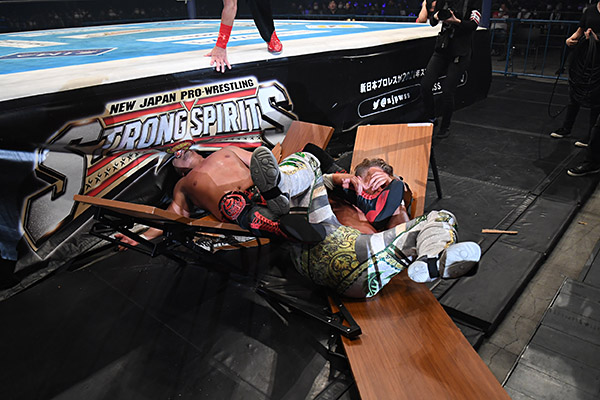 Takagi perservered however, and though a Blood Fall attempt was countered by Ospreay, the Noshigami connected for two. Whiplash from a heavy wheelbarrow German got another nearfall from the referee. As both men reset to their feet, Ospreay looked to kick the hurt arm of Shingo, but a catch from the challenger saw him power Ospreay through the air, a move that set Shingo into a high speed exchange ending with a sliding lariat as the Fukuoka fans tried to digest what they had just seen.

Ospreay retained enough composure to meet Takagi in the corner with a boot and head trapped kick, before joining his opponent on the top rope. The champion wanted a Stormbreaker and then powerbomb out of the corner, both denied, but an overhead kick set up a spring to the top for the champion and a Spanish Fly for two as the match passed the 25 minute mark.

Ospreay closed in on victory, going big with a Shooting Star over the ropes and second dead center, only getting two each time. Increasingly frantic, the champion kicked his challenger to the ringside tables set up earlier, and went for the 450 that broke Takagi in the New Japan Cup final. Takagi broke the move up however, and as both men fought precariously on the apron, Takagi stopped an OsCutter before connecting with Made In Japan through both tables. 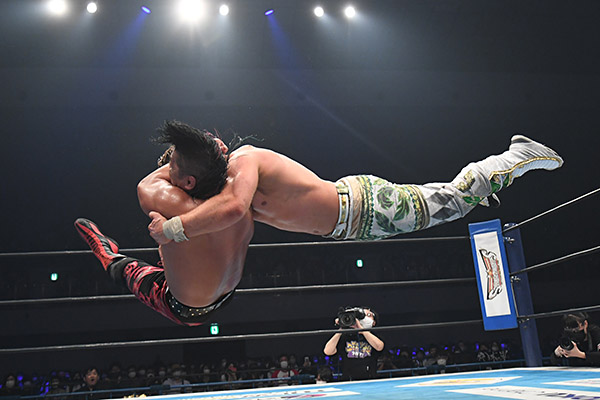 As the match went past 30 minutes, Shingo delivered a second Made In Japan center ring, only getting two, but Takagi’s follow up was not forthcoming as Ospreay could not support his own weight. The champion picked himself up in the corner but was met with charging lariats from his challenger; as both climbed to the top, Shingo wanted Stay Dream, and hung onto the ropes to block Ospreay’s counter Frankensteiner, but leapt off the top right into an OsCutter.

A second connected flush in the middle, but again only got two from the referee. The pendulum of momentum swinging his way, Ospreay looked for the Chelsea Grin, and then Hidden Blade, Takagi evading both moves and then blocking a super OsCutter to convert into a Takagi style GTR.

Takagi followed with the Ryukon Lariat in spite of his pained shoulder. When a Pumping Bomber was countered with a mid air flip from Ospreay, Takagi found a Takagi style OsCutter, before hitting the Pumping Bomber and going for Last of the Dragon. A pop up DVD was reversed to a backslide however, and the Silent Whisper put the challenger to the mat. 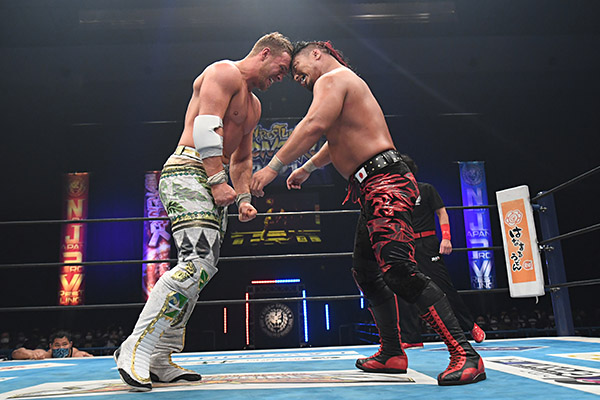 Poison Ranas were not enough for either man to stop the other, and Ospreay swung for the fences, connecting with Hidden Blade to the back of Takagi’s head. This time, the count was only stopped as Takagi’s right arm happened to break the plane of the ropes. This time, it was the dead weight of Shingo that Ospreay couldn’t lift, but the burning light was still in the challenger’s eyes as the match passed 40 minutes. Takagi walked through Ospreay’s forearms and delivered blow after blow, but a pop up DVD was still not enough to lay out the champion.

A second Pumping Bomber was countered with a Spanish Fly for two, and now Ospreay felt he could end with Stormbreaker, but again Takagi fought out, meeting a flying knee instead. With both men showing superhuman endurance and power, strikes followed strikes, and Shingo developed a sick grin after being rocked with a hard right forearm shiver. As heads clashed, Ospreay crumpled beneath a Dragon headbutt, and Takagi again wanted Last of the Dragon, but instead took the Chelsea Grin and a Rainmaker from Ospreay. 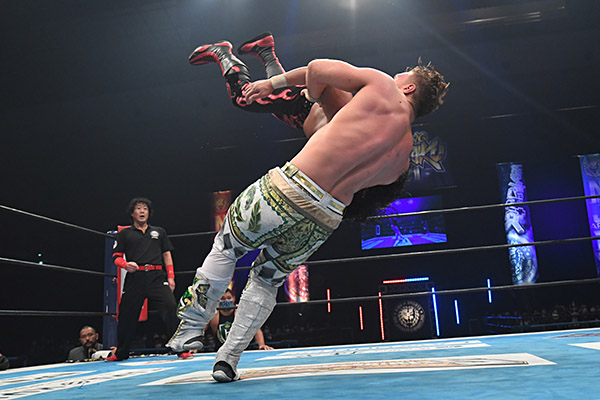 The champion removed his elbow pad, with Takagi finally downed, and the smack of elbow of skull rang through Fukuoka with the Hidden Blade. Stormbreaker followed, and Ospreay had retained. After a Rainmaker led directly to Shingo Takagi’s demise, Ospreay must now look ahead to May 29, and the man who invented the move. Can Ospreay finally vanquish Kazuchika Okada? 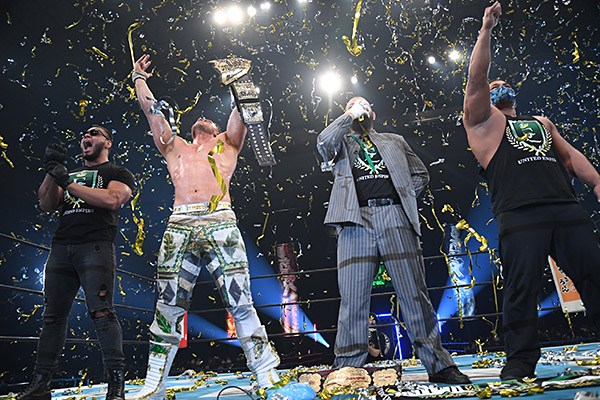