SANADA couldn’t stop the rain in Korakuen Hall on October 4 as Kazuchika Okada moved to join Jeff Cobb at an undefeated ten points after a scintillating main event.

With Okada and SANADA’s one sided rivalry well documented, Both men sought to show dominance in the early phases of the match, chain wrestling seeing no clear advantage and trips to the outside brief. Though Okada teased shooting SANADA into the guardrails outside, he would instead wait patiently for Cold Skull to rejoin him in the ring, while SANADA would use an Okada spill to land a plancha and get the crowd firmly on his side. 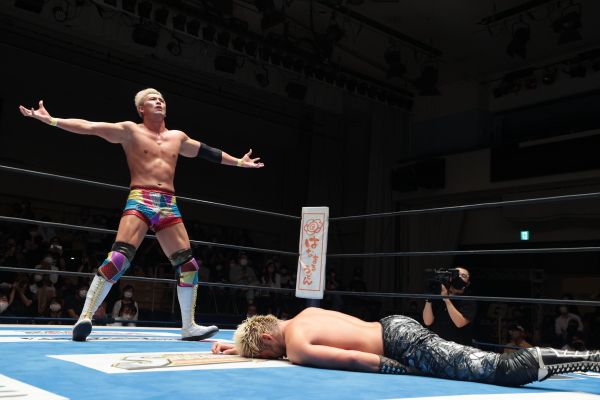 SANADA would get sustained offense by attacking Okada’s base, but the Rainmaker quickly responded. There was enough in the knee for Okada to dropkick his foe off the top rope to the floor and this time he followed with devastating offense. A DDT on the outside would badly damage SANADA’s neck, and create a window for a sustained assault. 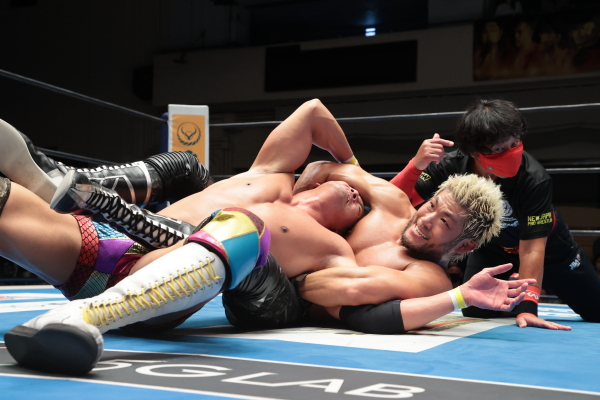 SANADA tried to stop that momentum with a backflip into Skull End, but when Okada avoided contact, the LIJ member jammed his knee. That gave Okada even more to go on as SANADA struggled to use his legs to power himself to the ropes. When he found Skull End and seemed to squeeze enough life from his opposition to try for the Moonsault, he would injure the joint again, but stayed in the hunt, fighting back to Skull End and this time hitting the Moonsault. 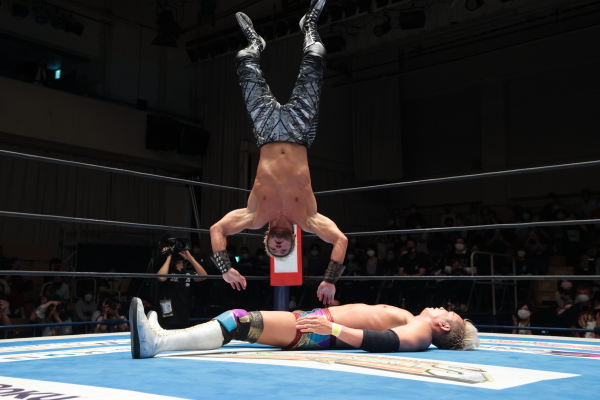 The bad knee meant SANADA was just barely too slow to make the cover as Okada kicked out and the 30 minute time limit began to dwindle. The fervent Korakuen fans clapped faster and more frantically for SANADA to secure victory. The moment almost came when an Okada dropkick missed wildly, and SANADA had the crowd willing him on as he set for a Destino into Skull End, but would be countered by the Landslide Tombstone and then a Rainmaker. 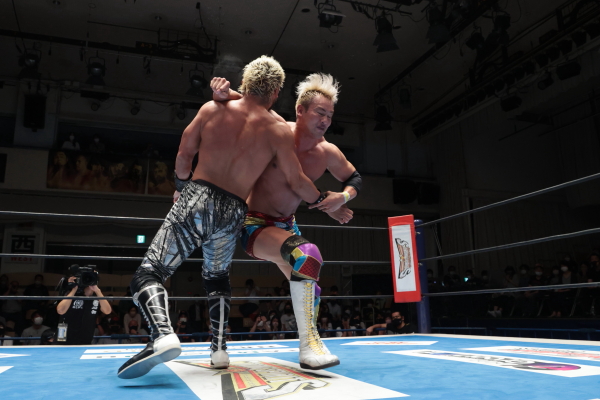 The CHAOS leader’s victory came after Hirooki Goto and YOSHI-HASHI had a hard fought final CHAOS derby of the tournament. The NEVER 6 Man team partners always bring the best out of one another, but Goto had not brought the best to his G1 in the first half of his campaign, four straight losses effectively ending his campaign already. YOSHI-HASHI then seemed as much intent on bringing a familiar fire from Goto as he was scoring the victory. 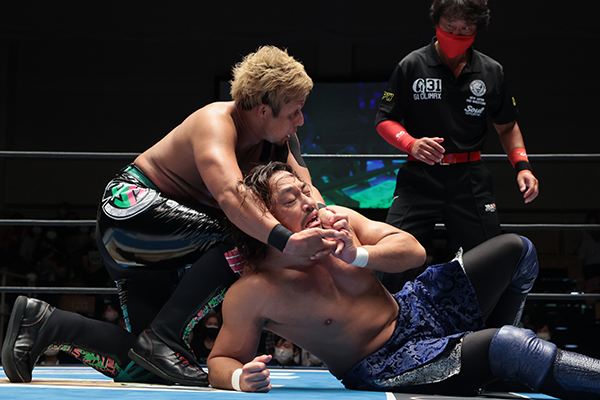 Teasing a Kumagoroshi as the match wore on, the Headhunter instead hoisted Goto into Shoten Kai, and with an opportunity to bring about the Butterfly Lock, instead got a Shibata-esque sleeper in. Goto would finally have enough buttons pressed, and stormed back to victory, a GTW, the original Shoten Kai and a GTR bringing about victory. 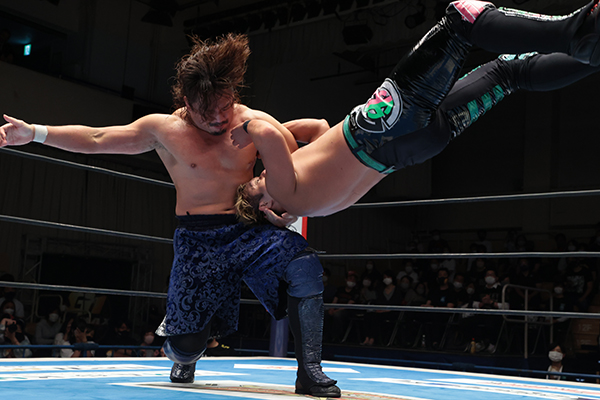 Despite his win, Goto and now YOSHI-HASHI are effectively eliminated from competition in G1 31. That speedy elimination was a result of the dominance not just of Okada, but Jeff Cobb. Indeed the Imperial Unit powered to yet another win in Korakuen, fighting hard to put away a game Taichi.
The Holy Emperor spotted a wrap on Cobb’s knee and would go downstairs often through the match to try and gain distance. Yet it was distance badly needed and almost impossible to earn for Taichi as Cobb pressed hard and with relentless power. Taichi’s back was badly damaged to the point where usual lifting offense was all but off limits, but the hard hits were still present. 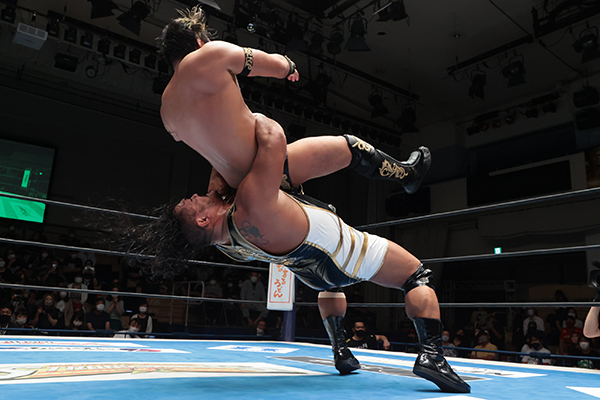 Devastating gamengiri and Kawada kicks were there for Taichi. The trusty Greco Roman throat hold was too, the hold coming in handy as Taichi countered the Tour of the Islands. Taichi eventually scored a Dangerous Backdrop Suplex but could not follow through; he tried to get Cobb up for Black Mephisto but could not complete the move, and after a wild German Suplex, the Tour planted Taichi. 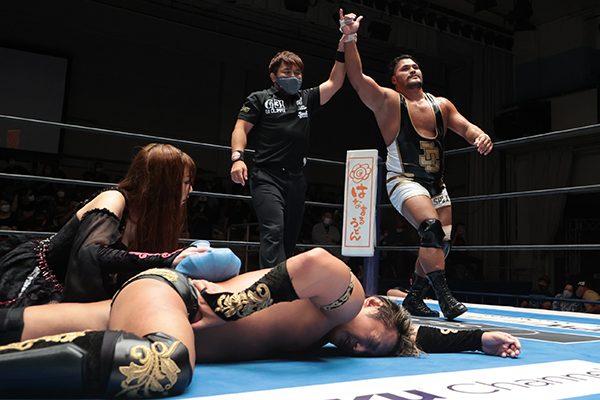 The final BULLET CLUB derby of B Block saw a cocky Tama Tonga tease that he knew something the audience and certain BULLET CLUB members did not. Yet it was EVIL who knew just a little bit more as Tonga left Korakuen Hall with egg on his face for the second consecutive outing in the venue.
Tonga should have known better than to expect a fair fight against EVIL as a loosened corner pad was the first of many shortcuts of the night. Yet with Jado present in Tama’s corner, Dick Togo was neutralized, and EVIL had to rely on his own merits, fair and foul. 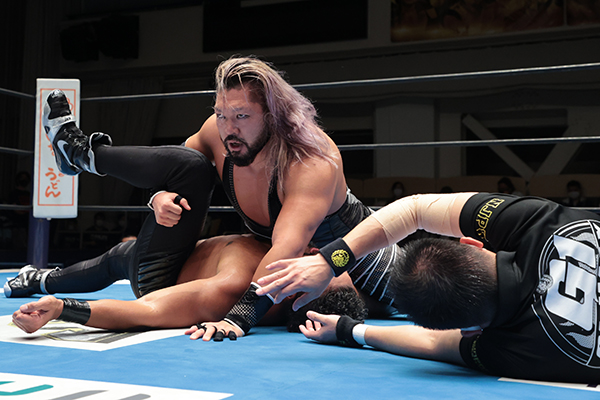 Yet as Tonga was able to block EVIL’s low blows and set up for a match deciding Gunstun, the lights went out, and in the confusion, Togo had the steel wire choker around Tonga’s throat. Jado would be quick to use his cane to break up the situation, but it was too late, EVIL picking up the win as it was revealed that SHO had come through in the clutch for HOUSE OF TORTURE.

Tama joins Chase Owens in having suffered a painful loss to EVIL, but Owens’ frustration from Hamamatsu quickly dissipated with a win against Hiroshi Tanahashi in the opening match of the night. Keeping calm under pressure, Owens withstood trademark Tanahashi offense to score with his own, rocking the Ace with Jewel Heist. Tanahashi got two from a Slingblade, and looked to end the match, but Owens evaded the High Fly Flow and landed a Package Piledriver for the biggest win of his career.
G1 continues with A Block in Hiroshima Thursday as Tomohiro Ishii and Great-O-Khan headline. B block continues on Friday in Kochi, with Kazuchika Okada and Taichi on top of the card.
NEXT：STRONG Preview: Pa...