Last night of B Block action, and musical guests rock the Budokan

After a month long journey all over Japan, all eyes are now on the Nippon Budokan and the culmination of the G1 Climax. B Block will be determined in the iconic venue tonight, and along with it, the final will be set, it’s winner getting a ticket to the Wrestle Kingdom 16 main event at the start of NJPW’s half century celebrations. 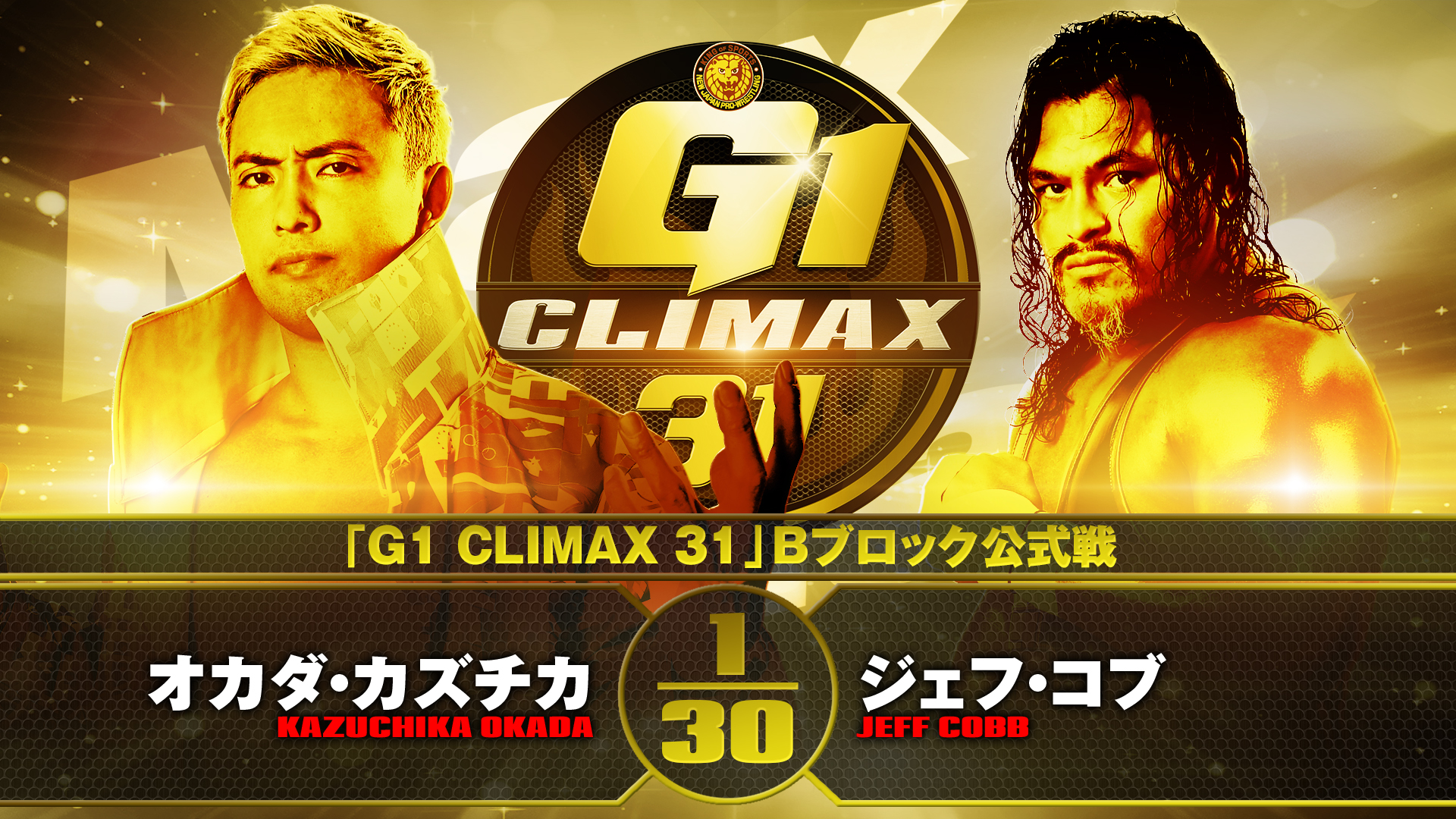 Never in the history of the G1 Climax had two men reached the 7-0 watermark until this year. Jeff Cobb doubled down in the history making in Yamagata this Thursday, becoming the first in history to make an 8-0 winning streak in the same tournament, meaning he is undefeated this final night, and that the ‘block math’ so complicated in A block is very simple indeed; win, and you’re in the final.

Okada seemed set to join Cobb at the high 8-0 watermark, but the rain was stopped in Yamagata when Tama Tonga struck with a Gunstun and the DSD, handing Okada a shocking first loss, and putting him at a disadvantage in the Budokan; win and you’re in, yes, but if the match were to go to a draw, it would be in Cobb’s favour.

After trading victories in the Tokyo and MetLife Dome,  Cobb and Okada face off for the fourth time in two years, potentially with everything at stake. Will Cobb follow his dominant victory over the Rainmaker before the G1 at the MetLife Dome to secure G1 victory for himself and the United Empire? Or will it be Okada banishing bad memories from September to make it rain on the Nippon Budokan? 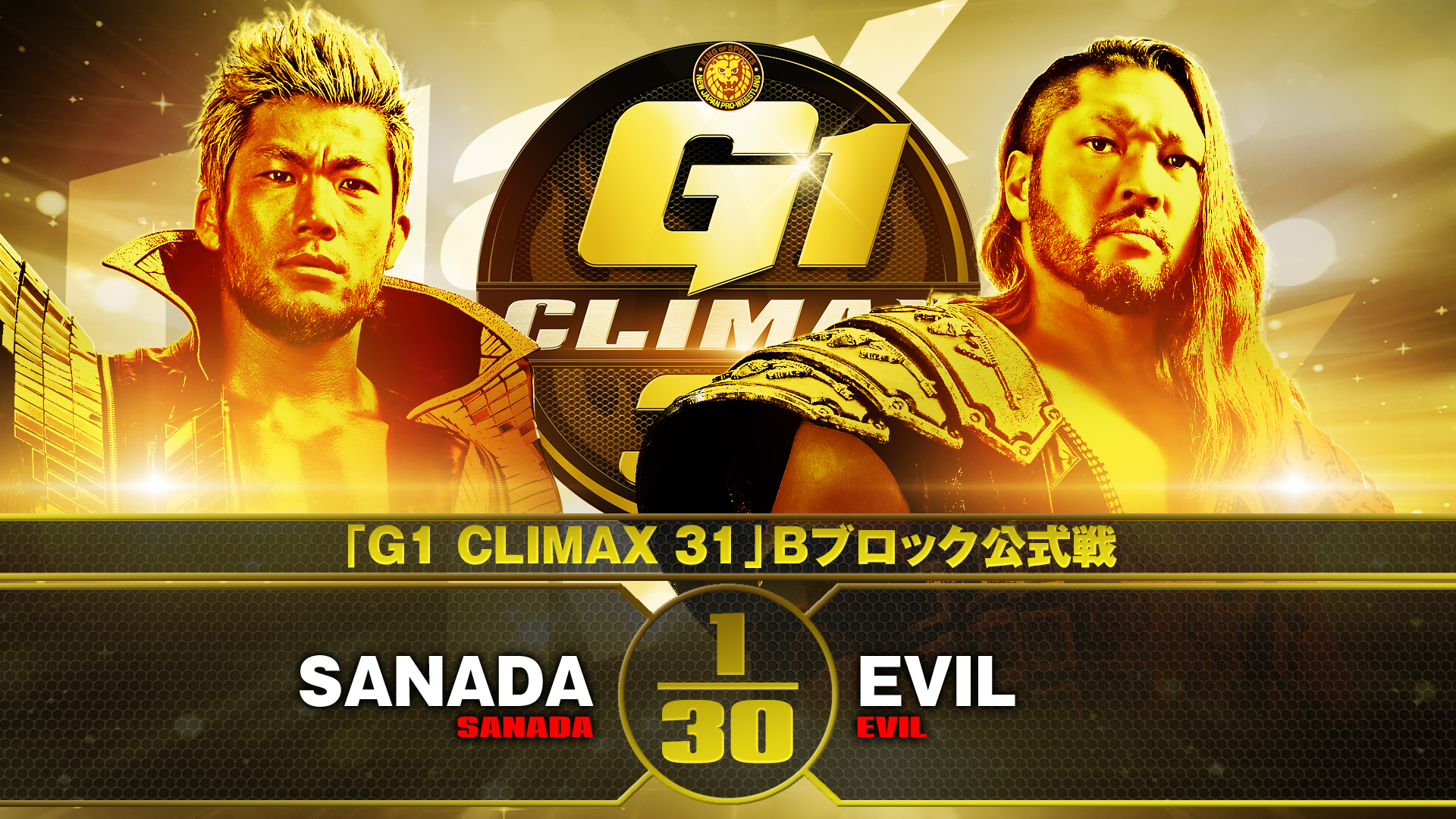 One year since they met in the last day of G1 Climax 30 group action, SANADA will once again face EVIL on the last night of group action. Last year, an O’Connor Roll booked SANADA’s place in the final, but Cold Skull’s 2021 campaign saw him fall by the wayside some time ago, and EVIL’s quest to shroud the G1 trophy in darkness was ended by Jeff Cobb in Yamagata Thursday. Now both wrestle to heal their bruised pride by defeating their former partner.

Yet his G1 campaign has been eclipsed by the phenomenal records of Jeff Cobb and Kazuchika Okada, and the utterly disgraceful conduct of EVIL. The King of Darkness did all he could to cheat his way to the top, only to be stopped by the superhuman Cobb. Now then, EVIL will seek to move forward by going back to his start for the second time this year. During the summer it was a win over long time occasional rival Tomohiro Ishii that seemed to put him on the right (or wrong, depending on perspective) track to challenging for IWGP World Heavyweight gold in the MetLife Dome. Now that his G1 campaign is over, he will seek his twisted brand of ‘justice’ on his former ally before resetting his sights on the end of the year, and a place on the grand stage of Wrestle Kingdom 16. 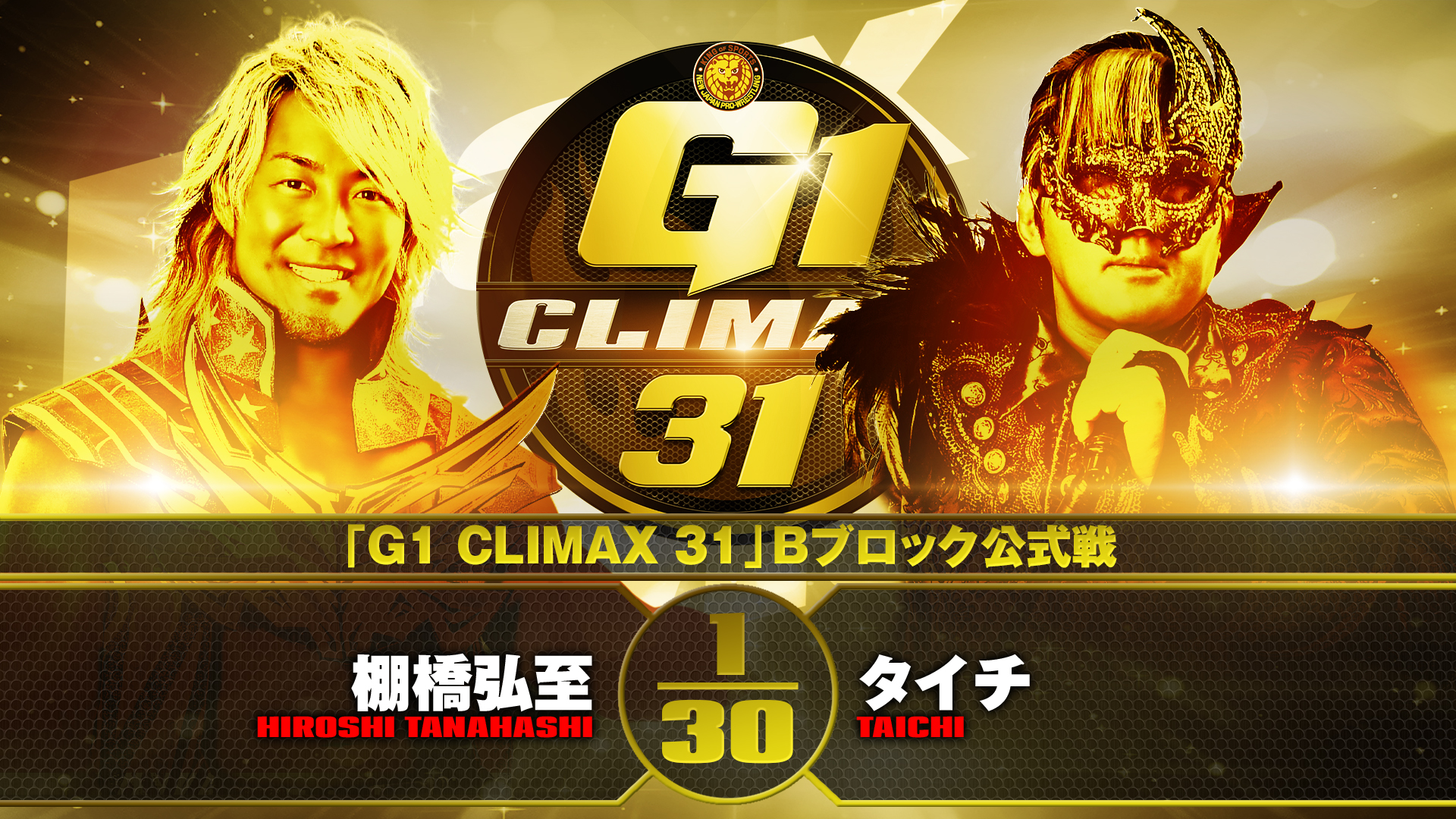 Both men are mathematically eliminated.

Having wrestled, and defeated, one another in the first round of the New Japan Cup in the past, Tanahashi victorious in 2018 and Taichi in 2020, each knows the pain and disappointment of a tournament exit at the other’s hands. In this year’s G1 however, Tanahashi and Taichi’s exits both came significantly earlier than they had bargained for. After an early fast start, Taichi slumped to six consecutive losses, and with rib injuries exacerbated in every bout.

A win over the IWGP US Heavyweight Champion would certainly ease both the hurt body and the hurt pride. Yet Tanahashi is determined to represent his recently won title to the very best of his ability, something that will require a positive record by the end of the tournament, and to keep that line of contenders as short as possible. 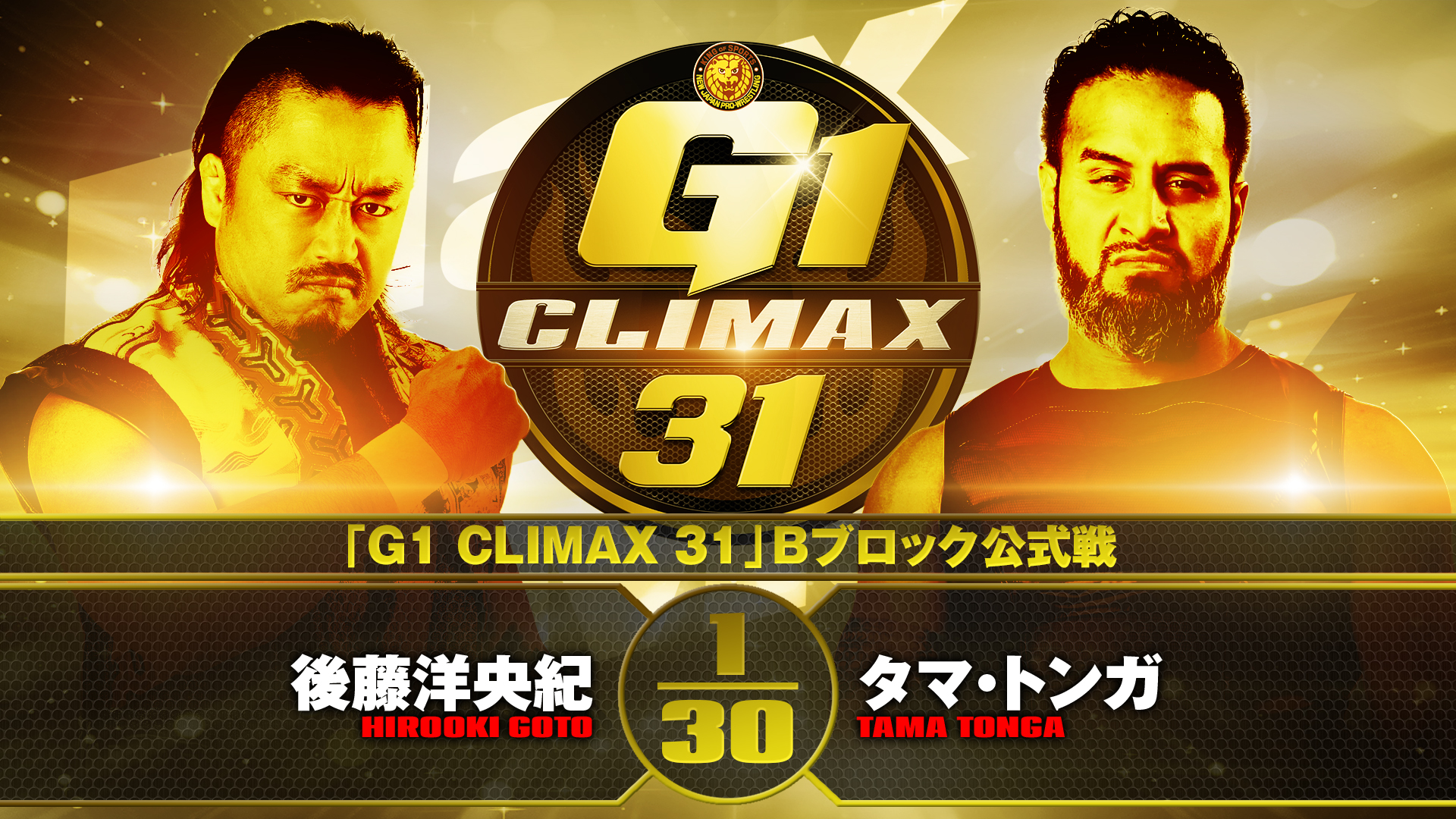 At the top of the table in G1 Climax, wins and points are everything. The closer you are to the top, the better the chance you have of taking the trophy; points mean prizes after all. Yet when you’re out of the running, it doesn’t necessarily become how many wins you have, but who they’re against that becomes crucial to your narrative.

With his first ever win against Kazuchika Okada in the main event in Yamagata after a thrilling battle against the Rainmaker, Tama Tonga has gone from a ‘just fine’ tournament run to four or six points that may or may not stand him in good stead for inclusion in next year’s field, to an instant front runner, out to ‘rewrite history’. Tonga may only have two more points than Goto tonight, but will be feeling like he can take on the world, while the CHAOS member stares down the barrel of his career worst G1 performance.

After six defeats to Goto over the years one on one will Tama be able to score his first win against Hirooki Goto on the seventh time of asking, and keep fearsome momentum going? 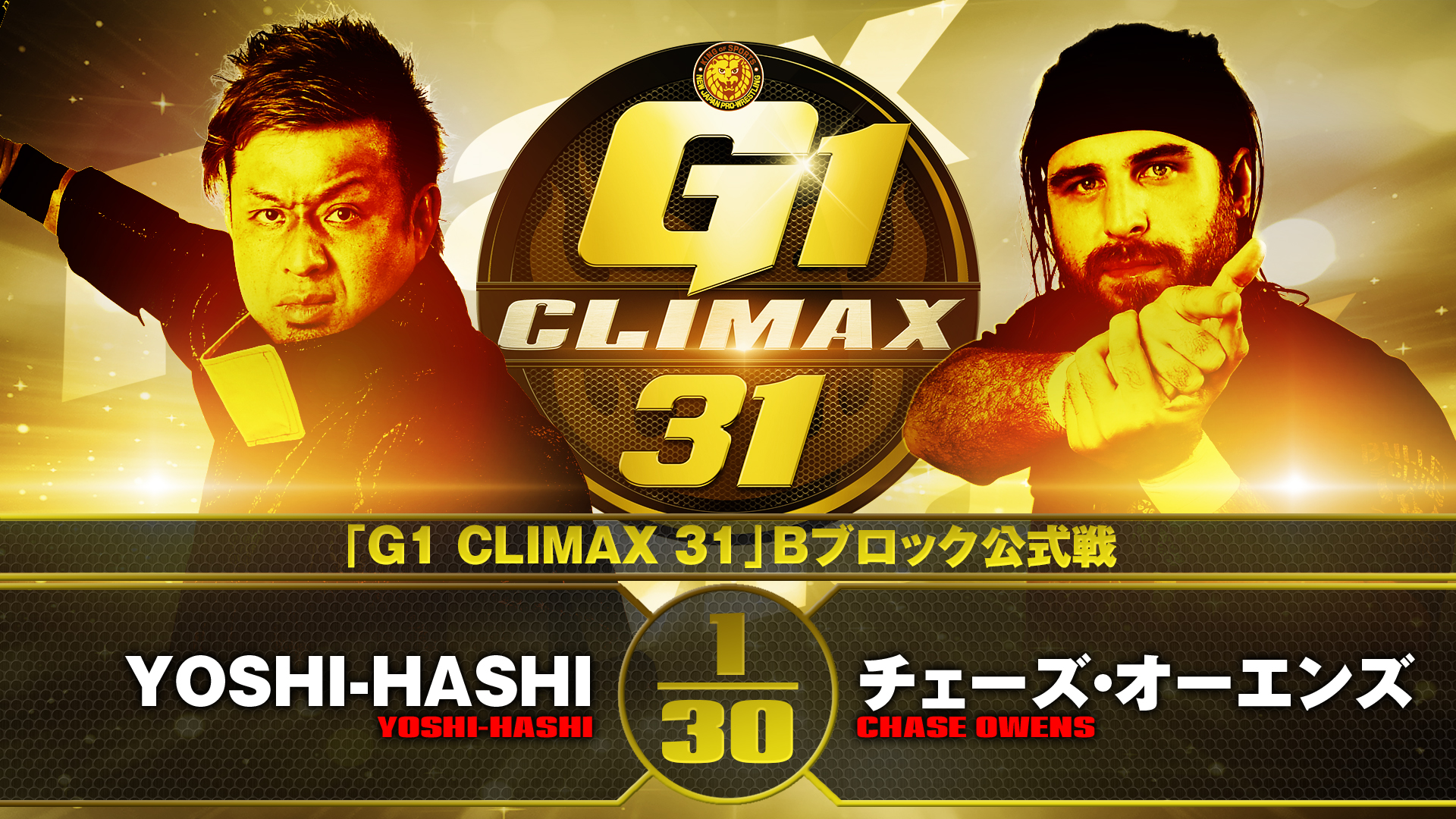 They might not have much in common as personalities, but YOSHI-HASHI and Chase Owens have a lot of similarities as competitors that have stood out in stark highlight through the G1. Both predominantly seen as team players, they have shows heart and determination to push their singles opponents hard through the league. Their considerable wrestling IQs meanwhile have seen sure fire moves get countered on several occasions, leading to nail biting conclusions to their matches, even if they haven’t ended with hands raised.

Indeed, Owens and YOSHI-HASHI both also share a 2-6 record going into the last night of action. The lower point score belies the obvious effort of both men, and tonight will see them fight all out to see who ends their campaign with just one more win on the table.

Before tournament action gets started in the Budokan Wednesday, anime song supergroup JAM Project will be on hand to perform the G1 theme tune, Max the Max, live! Get fired up for the action with this first ever live performance of the theme tune from in-ring! 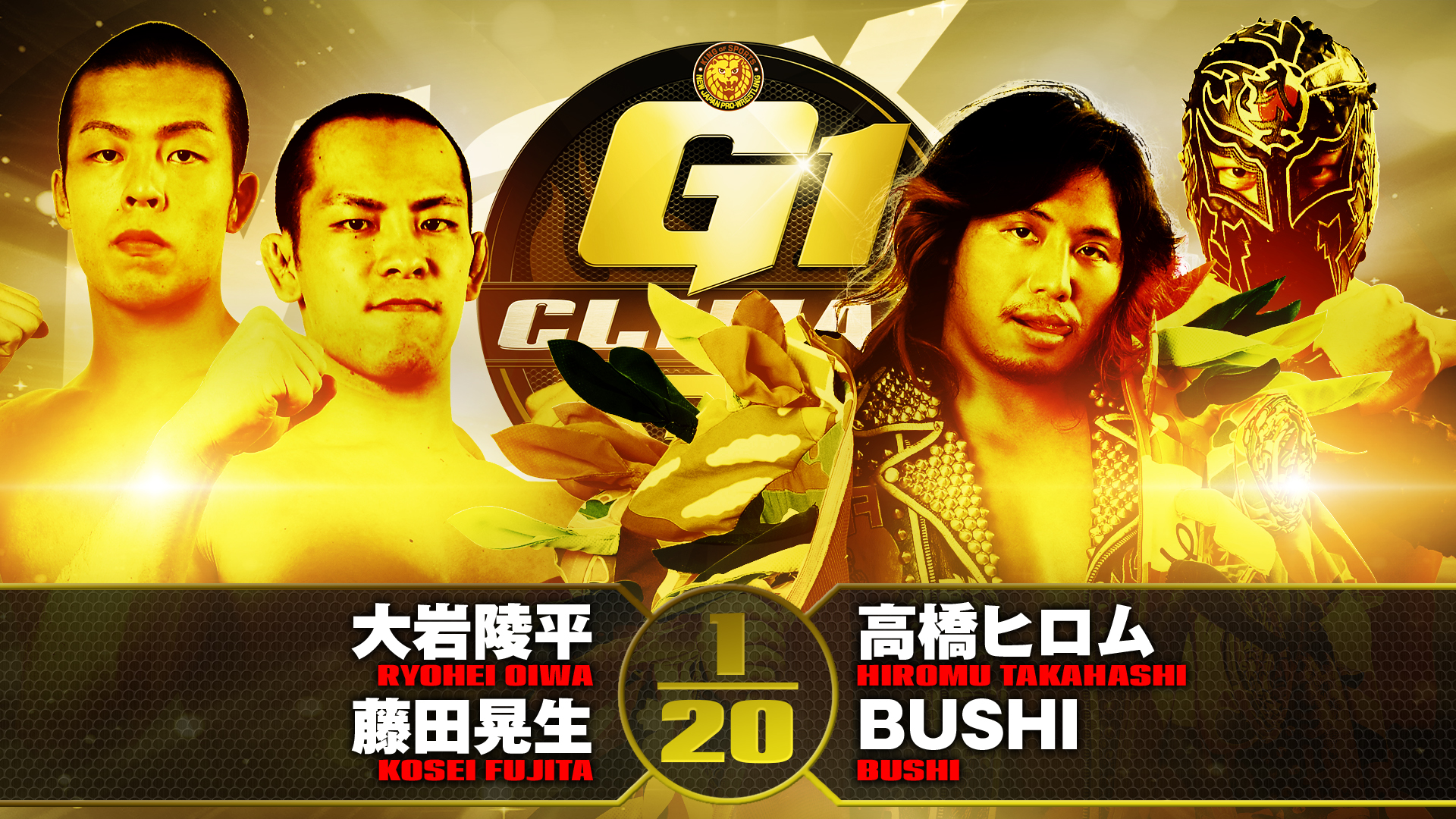 Starting off the action at the earlier time of 5:30PM, Ryohei Oiwa and Kosei Fujita will have the chance to show what they can do as the fans arrive to the Nippon Budokan. This special kick off match will see them try and outdo their performance from Yamagata. Can they get some revenge from reddened chests at Hiromu’s hands earlier in the week in Senday singles matches?