NOAH and NJPW in full force on ABEMA Pay-Per-View

Matches have been determined for Wrestle Kingdom 16, emanating from Yokohama Arena on January 8, and broadcasting live worldwide on ABEMA Pay-Per-View. The order of the PPV event’s nine main card matches has yet to be determined, but all will see the best both promotions have to offer in all-star collisions. 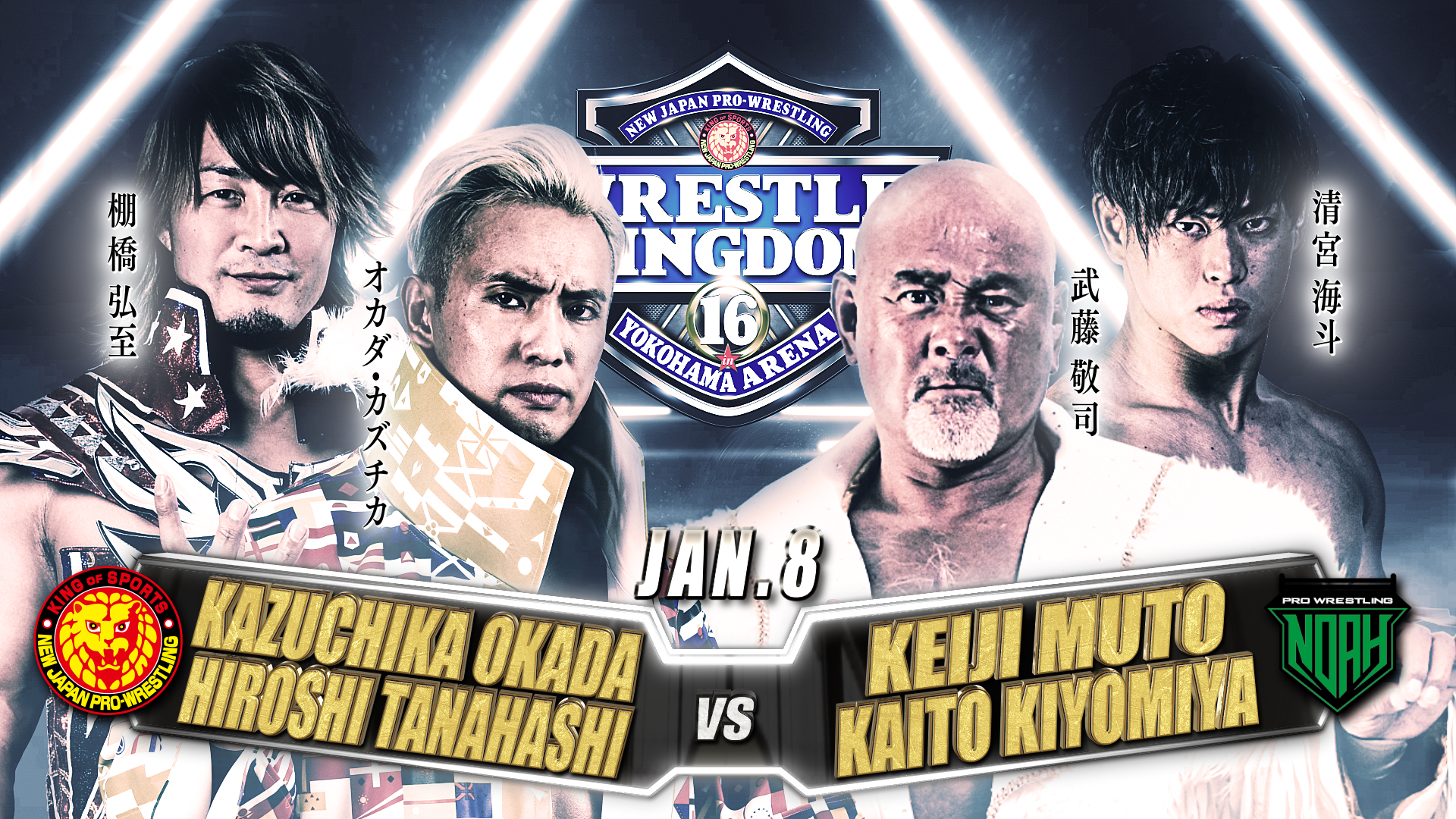 An iconic tag battle will see NJPW’s dream team of Kazuchika Okada and Hiroshi Tanahashi face Keiji Muto and Kaito Kiyomiya. The young Supernova of NOAH, Kiyomiya has been gunning for a match with Okada for over a year, and now gets his chance against the brand new IWGP World Heavyweight Champion. Meanwhile new IWGP US Champion Tanahashi, who directed pointed words toward Kiyomiya and NOAH at the announcement press conference, sees a lot of himself in the young star, and his struggles in the past against the legendary Keiji Muto. Tanahashi and Muto haven’t crossed paths since 2009, while Okada has a lot of praise for what Muto ‘used to mean’ to professional wrestling. Muto has done it all in the wrestling business, and will seek to show the Ace and the Rainmaker that he is still capable of fighting with the world’s very best. 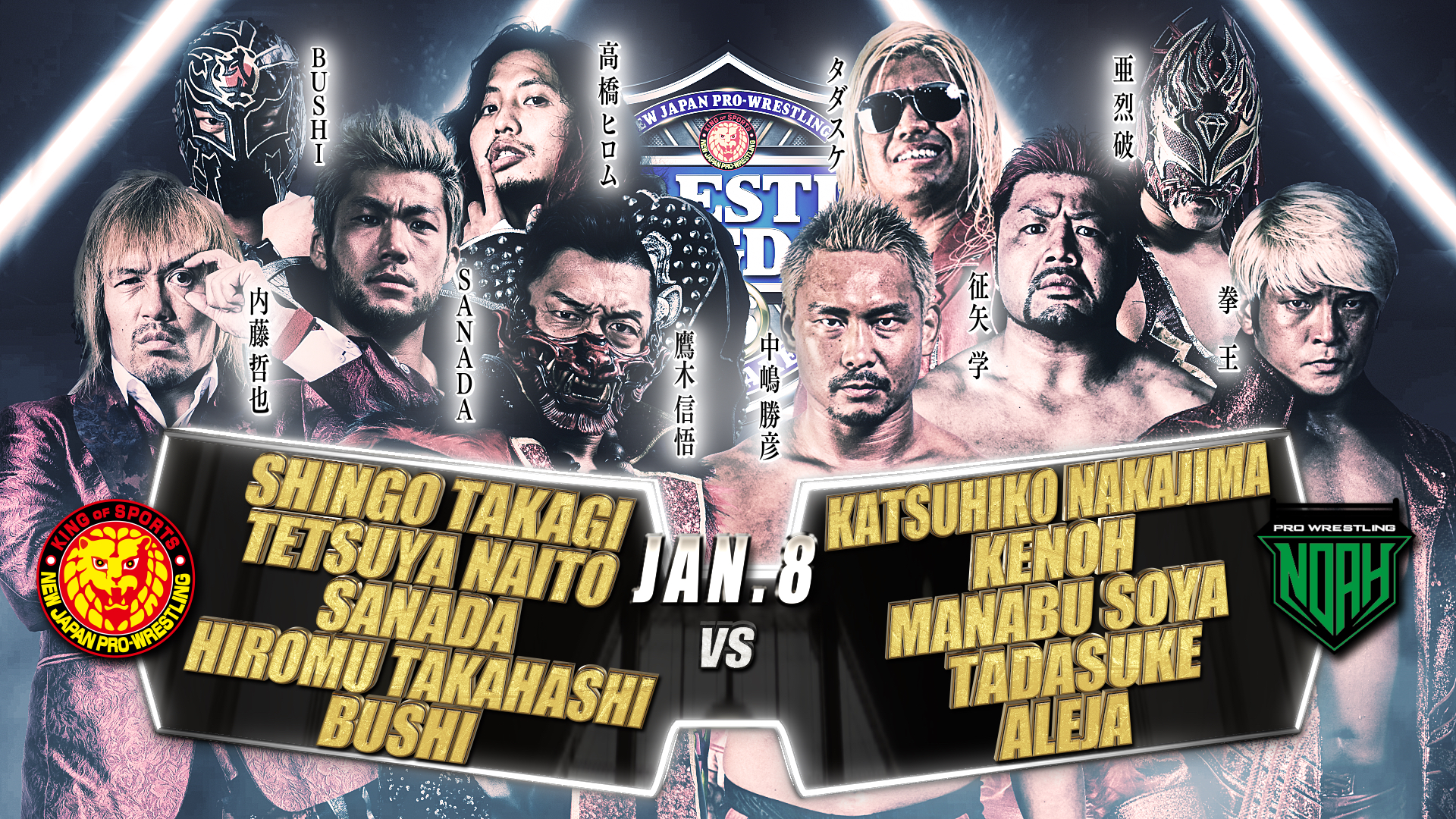 Two of NJPW and NOAH’s most popular factions will clash in a massive five on five tag team collision when Los Ingobernables De Japon on Shingo Takagi, Tetsuya Naito, SANADA, Hiromu Takahashi and BUSHI face Kongo (Diamonds) in Katsuhiko Nakajima, Kenoh, Manabu Soya, Tadasuke and Aleja. At time of announcement, Shingo Takagi is IWGP World Heavyweight Champion, while Katsuhiko Nakajima wears NOAH’s richest prize in the form of the GHC Heavyweight title. Yet both men will see championship main event action across the Nippon Budokan and Tokyo Dome before January 8. Will they be the standard bearers for their companies at large tonight?

LIJ was formed under the ungovernable charisma of Tetsuya Naito, but Nakajima has an antagonistic charisma all his own that has seen him flourish in the emerald green. With current GHC National Champion, and often times rival of Nakajima, Kenoh together with the tank like Soya and junior heavyweight tag specialists Tadasuke and Aleja, they form a formidable group; but are they enough to compete with the all-star LIJ lineup? 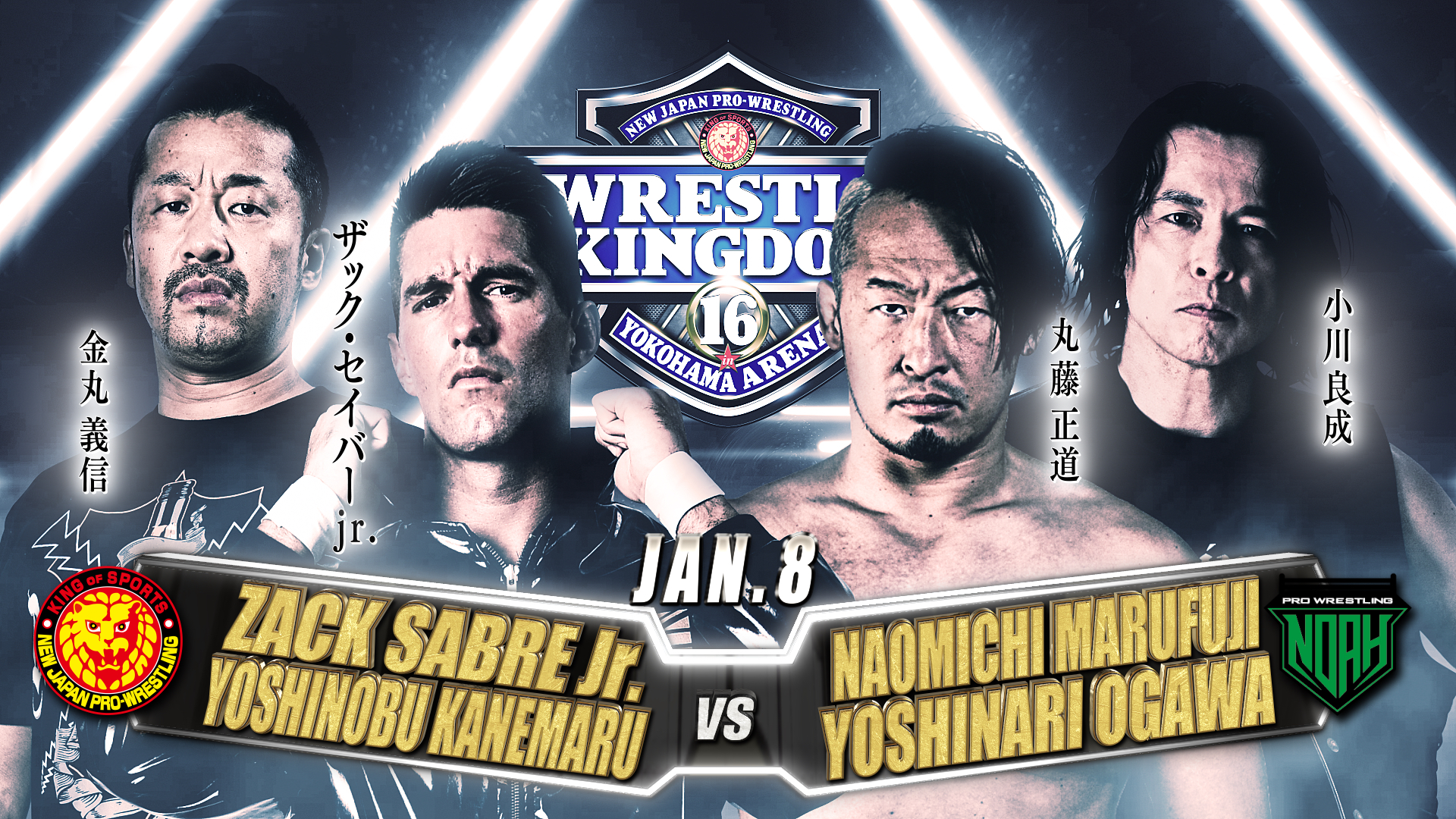 Zack Sabre Jr. and Yoshinobu Kanemaru will represent NJPW on January 8, but both have rich histories with pro-wrestling NOAH, and the two men they face in Naomichi Marufuji and Yoshinari Ogawa. Sabre was a long time partner of Ogawa’s, and has credited the veteran junior heavyweight with moulding his European catch stylings to fit in Japanese rings. Kanemaru is arguably NOAH’s greatest GHC Junior Heavyweight Champion, and can include among his many successes, several bouts with Marufuji, all without being pinned or submitted by the charismatic NOAH icon. Will that record continue Saturday? 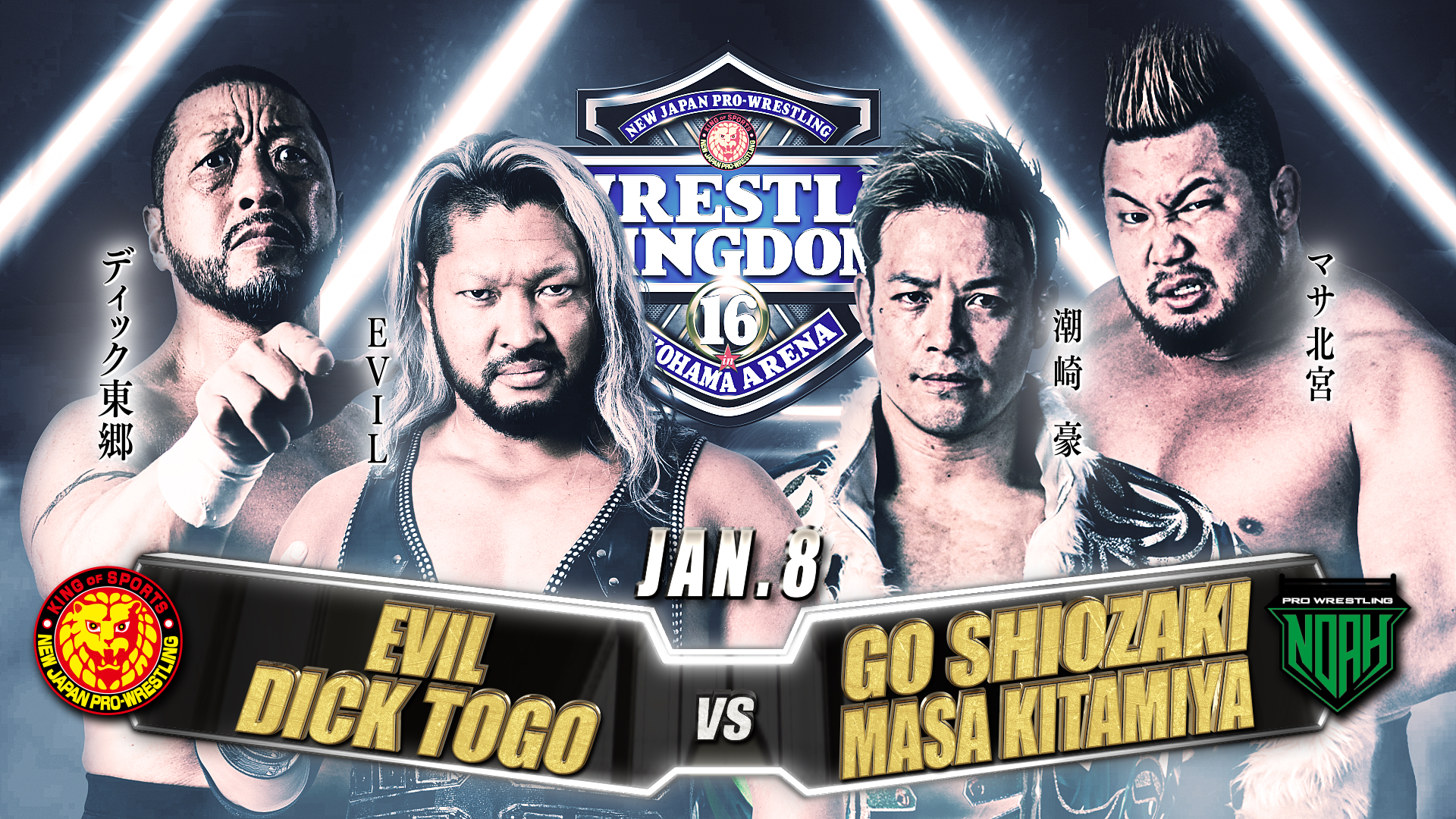 EVIL and Dick Togo of HOUSE OF TORTURE will face NOAH’s Go Shiozaki and Masa Kitamiya. If a partisan NJPW fanbase will be rooting for NJPW’s best up and down the rest of the card, they may hold their applause for EVIL and Togo as they go up against Shiozaki and Kitamiya. After a war with Nakajima for the GHC Heavyweight title on New Year’s Day, Shiozaki is still frustrated at not representing NOAH as its top champion tonight, and will not take nonsense gladly from the BULLET CLUB sub group. The fiendishly strong Kitamiya will not take nonsense gladly from anyone; could NEVER Champion EVIL be a target? 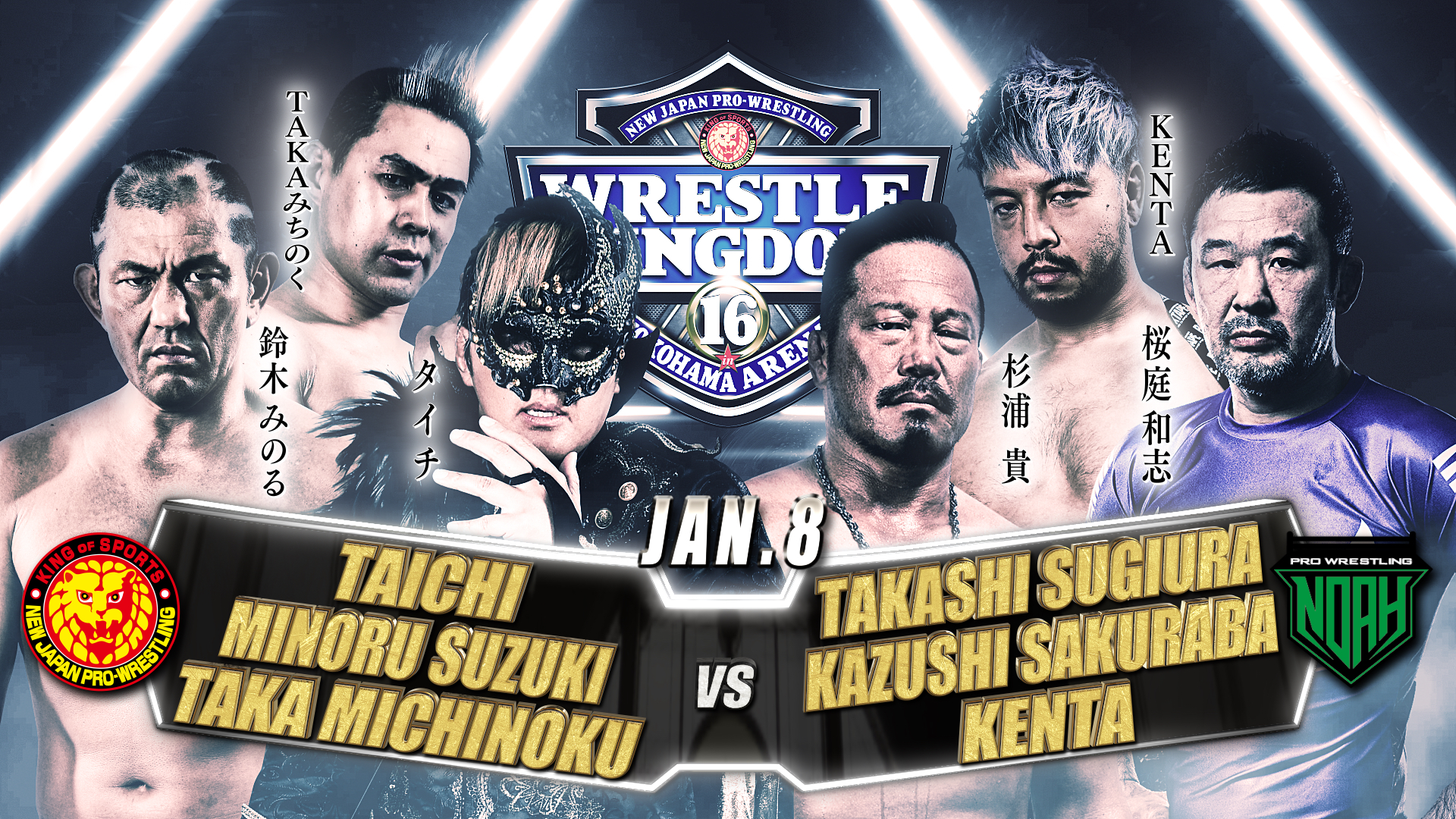 Suzuki-Gun meets Sugiura Gun in six man action as Taichi, Minoru Suzuki and TAKA Micghinoku take on Takashi Sugiura, Kazushi Sakuraba, and shockingly KENTA, the current IWGP United States Champion representing the emerald green in Yokohama. Sugiura has long fought on behalf of NOAH in their clashes with NJPW over the years, but when Suzuki-Gun invaded NOAH in the mid 2010s, it would be Sugiura that joined the group in their reign of terror, betraying NOAH in the process. Eventually seeing the error in his ways, Sugiura would rejoin the NOAH fold and saw to it that Suzuki-Gun were banished back to NJPW. Tonight, payback comes five years in the making, and Sugiura has employed the mercenary KENTA to join his group for a limited time only. After the war that KENTA went through with Tanahashi on January 5, what plans does the former US champ have in mind next? 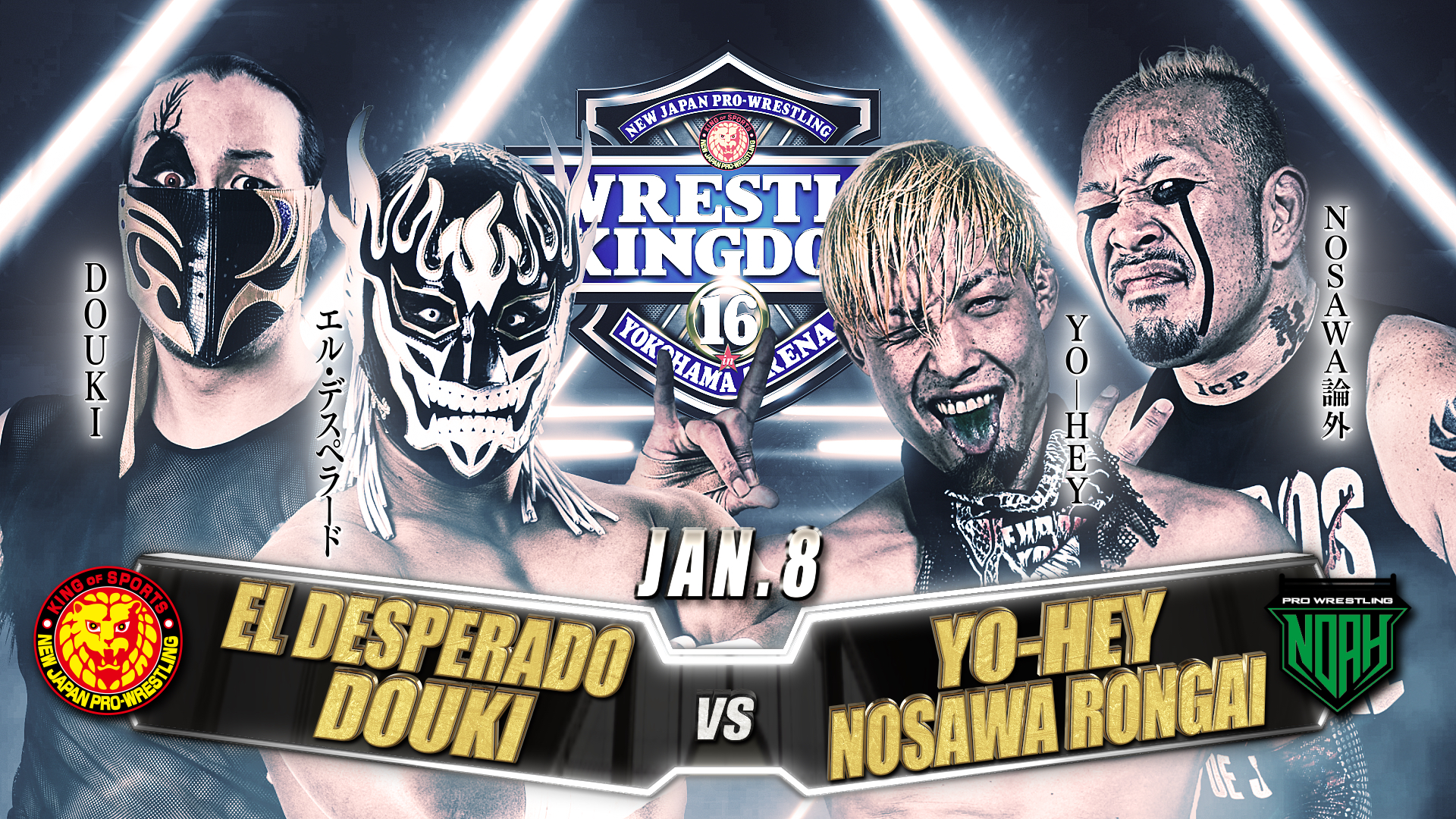 Suzuki-Gun’s El Desperado and DOUKI will be facing YO-HEY and NOSAWA Rongai of Perros Del Mal de Japon. The Dogs of Evil, Perros Del Mal earned a reputation in Mexico, in both CMLL and on the independent circuit. NOSAWA’s long history in Mexico granted him the connections to bring the group to Japan, and to NOAH, where he brought in members like former two time GHC Junior Heavyweight Tag Team Champion YO-HEY. Perros Del Mal is a faction with which DOUKI and Desperado are well familiar in their own journeys in Mexico. DOUKI’s nickname of Japones Del Mal is no coincidence, but how will he interact with the Japanese version of the group in Yokohama? 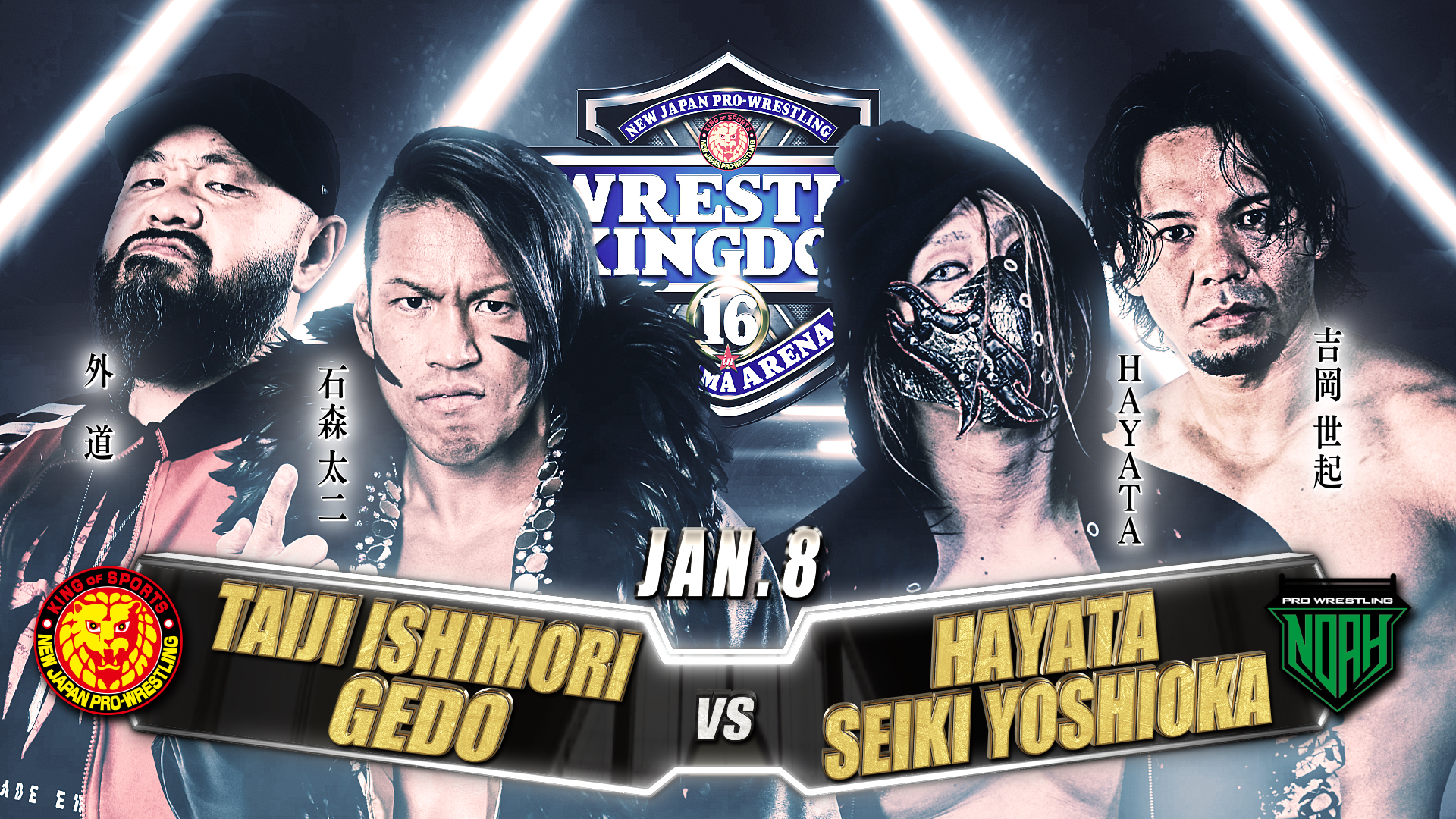 Taiji Ishimori will change up from his regular partner El Phantasmo to team with Gedo in action against STINGER’s HAYATA and Seiki Yoshioka. HAYATA and Taiji Ishimori have some previous, as the two frequently battled over the GHC Junior Heavyweight Tag Team Chamopionships before Ishimori made the leap to NJPW and BULLET CLUB. Now they pick up where they left off, and HAYATA being the current GHC Junior Heavyweight Champion on ly makes him a amore attractive prospect to the Bone Soldier. 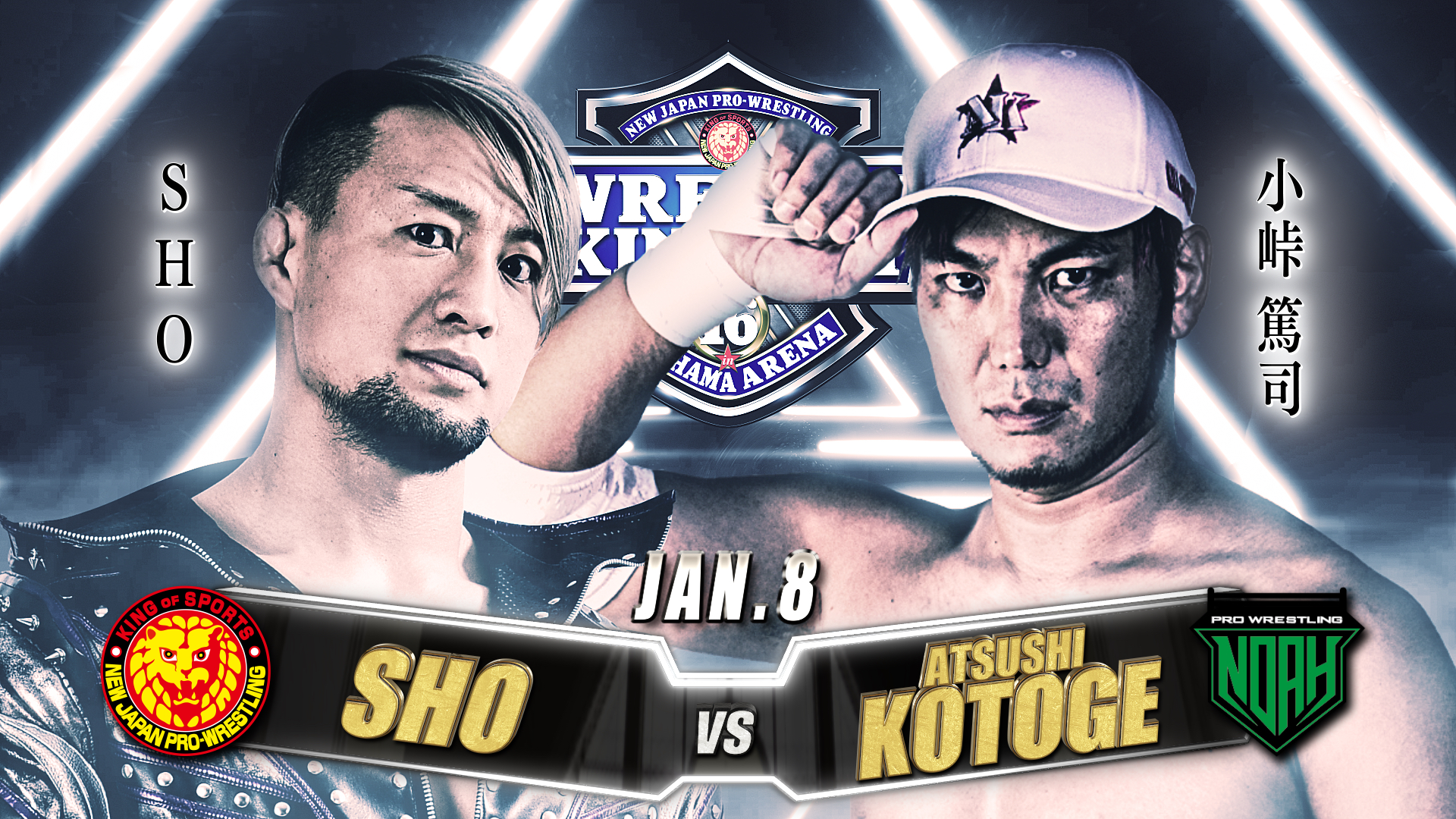 SHO will face Atsushi Kotoge. The well travelled Kotoge will be looking to make a mark for himself and NOAH against SHO, whose loyalties lie firmly with HOUSE OF TORTURE rather than with NJPW at large. Fighting for himself rather than his company, SHO seeks to make an example of Kotoge and NOAH. 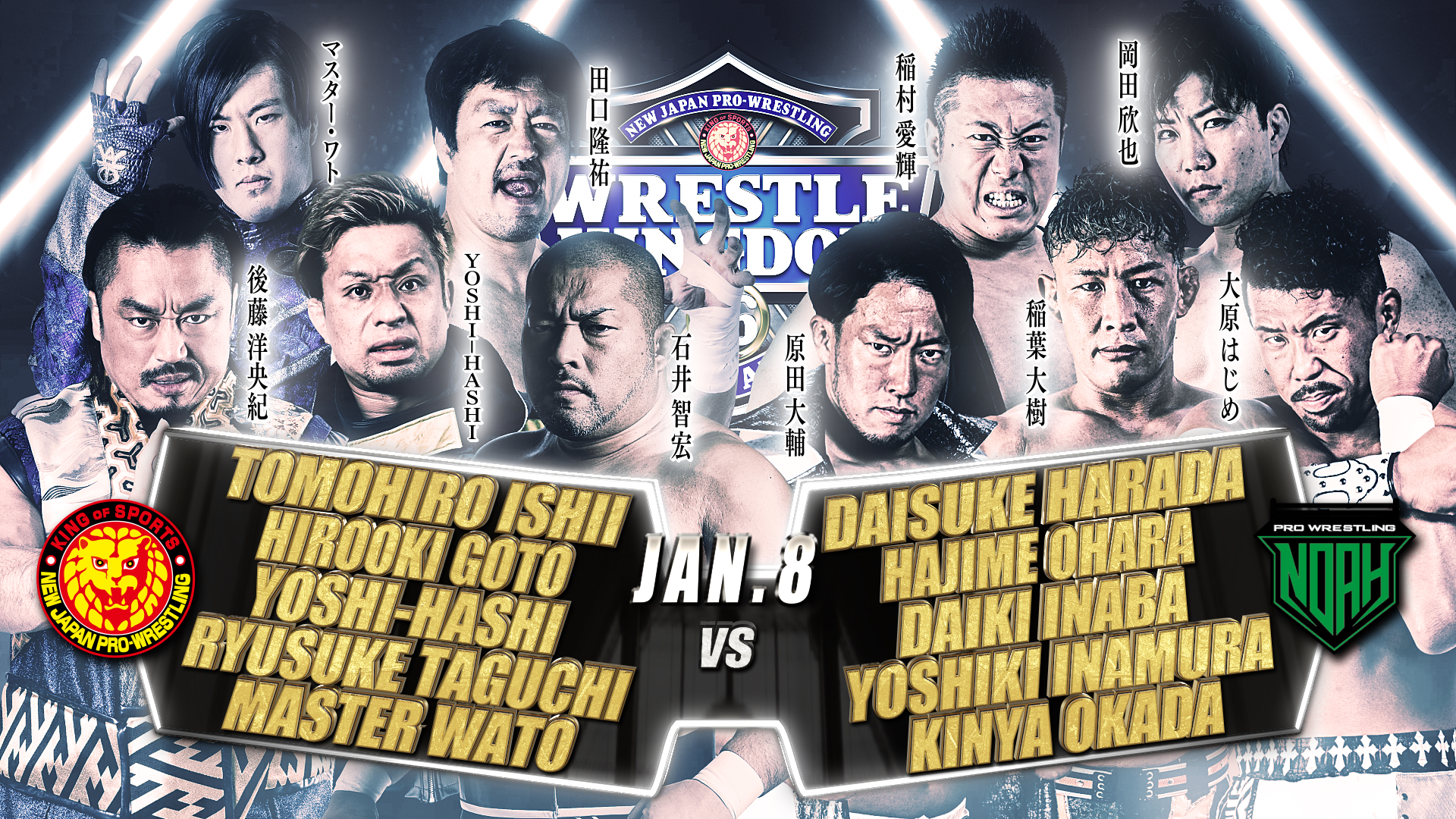 CHAOS’ Tmohiro ishii, Hirooki Goto and YOSHI-HASHI join Ryusuke Taguchi and Master Wato as they face former GHC Junior Heavyweight Tag Team Champions Daisuke Harada and Hajima Ohara, along with the Mad Dog Daiki Inaba, young powerhouse Yoshiki Inamura and rising star Kinya Okada. The powerful clashes between Ishii and Inamura will be something to watch here, while Master Wato will be one to look for as he tries to assert himself against promising younger NOAH talent and accomplished juniors. 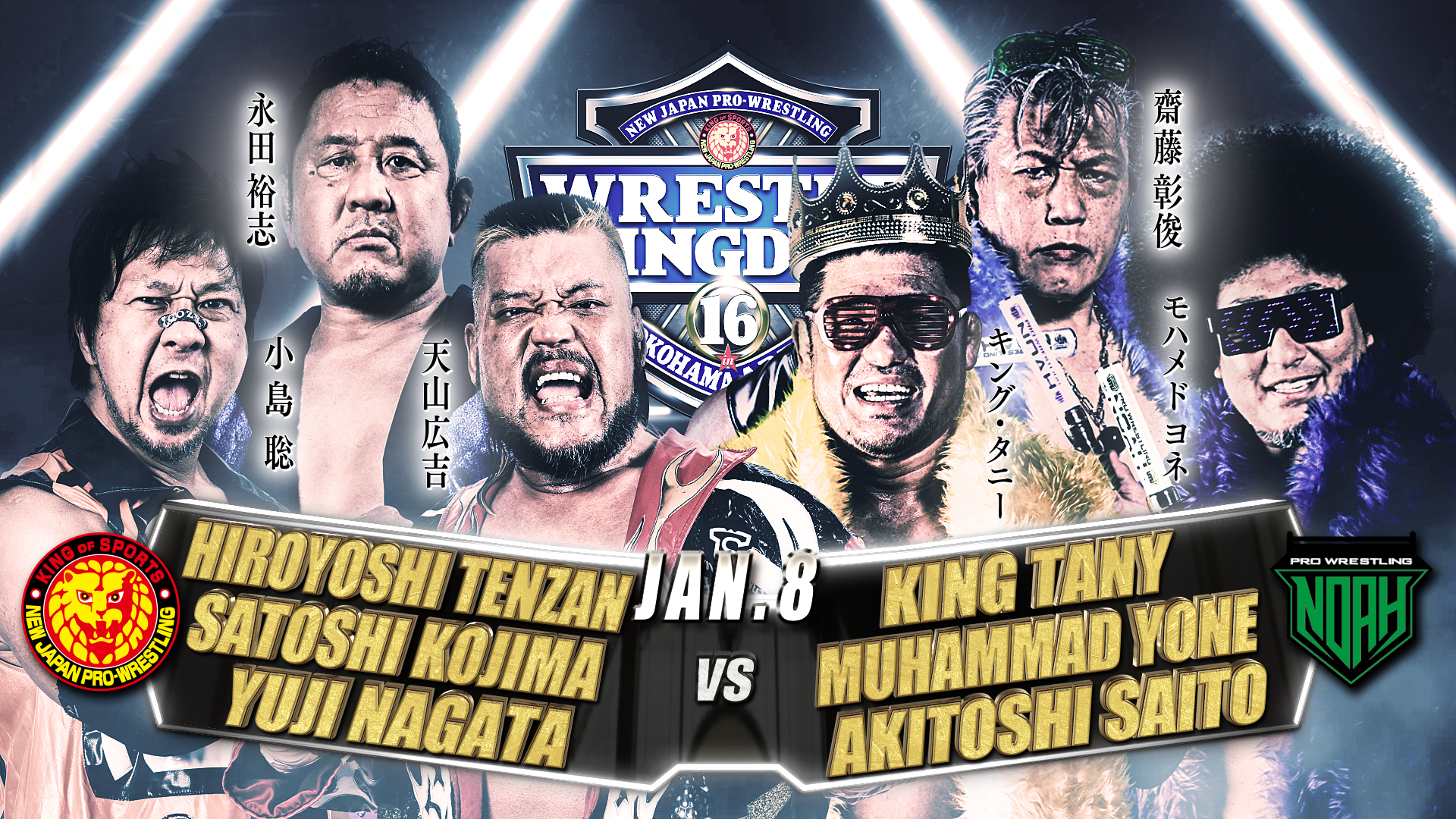 In the second of two special kickoff matches starting from 4PM local, the Third Generation of Hiroyoshi Tenzan, Satoshi Kojima and Yuji Nagata face NOAH’s veteran trio of King Tany, Muhammad Yone and Akitoshi Saito. Both teams will seek to show that their generation can still bring the action, and fight with pride for their respective companies. 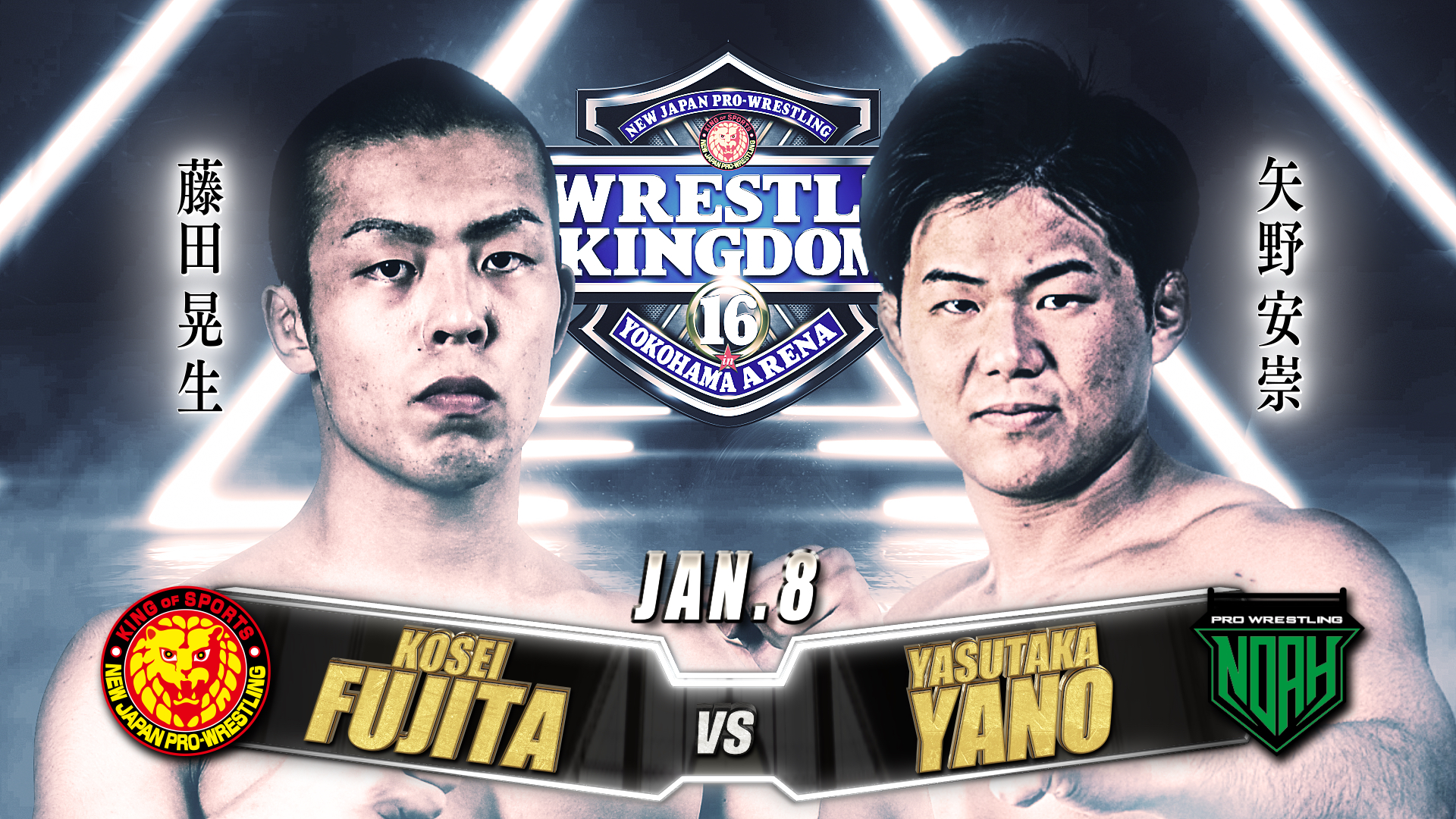 Yasutaka Yano of NOAH will face Kosei Fujita of NJPW in the first kickoff match of the night. The next generation of each promotion is being showcased here, as 21 year old Yano, at 15 months into his career, faces 19 year old Fujita at seven months of experience. Whose future will be brightest? And with both carrying the pride of their home in Ehime, and as accomplished high school amateurs, there will be a lot to look for in the very first kickoff match.