–Last time we covered up to your Dontaku 2011 defence in Fukuoka. After that, you headed to the US, with matches in New York, New Jersey and Philadelphia.

Tanahashi: I had my doubts going into that tour. We didn’t have any connections with ROH or anything at that point; it was something Tiger hattori co-ordinated on his own with us independently.

–This was three and a half years before NJPW World as well.

Tanahashi: Right. So the fans who were there were the super hardcores that were keeping up with news online and importing Japanese DVDs, that kind of thing.

–You heade dout a little earlier along with Jyushin Thunder Liger and Prince Devitt to do local promotion. What do you remember of that?

Tanahashi: I remember us going to a fan convention in New Jersey. Road Warrior Hawk was there, Kurt Angle. Chyna as well.

–Ah, Joanie Laurer? She wrestled in NJPW through 2002.

Tanahashi: I got to wrestle her as well. She called me ‘pretty boy’… I saw her at the convention and asked ‘do you remember me?’ She responded right away- ‘oh, hey, pretty boy!’ (laughs). 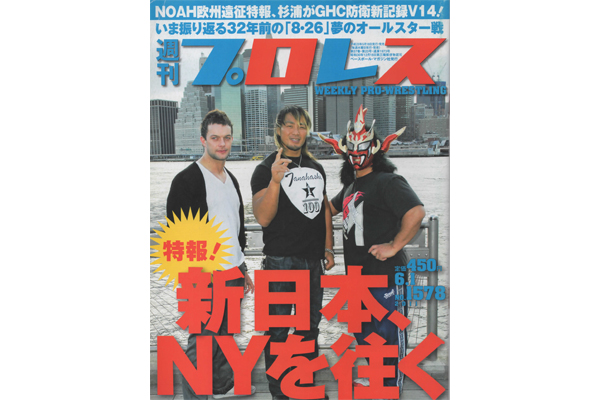 –On May 14 you made your fourth defence against Charlie Haas. A former all-America amateur, he had a notable run in WWE in Team Angle, and was a former WWE Tag Champion with Shelton Benjamin.

Tanahashi: I watched quite a bit of WWE while Haas was in Team Angle. He definitely struck me as an impressive athlete. It wasn’t until I got in the ring with him though, that I realised how big of a guy he was. It wasn’t until I got up close to him that I realised he was huge. He had that balance of athleticism and power; for guys like him and Benjamin to be who they were, and still not quite get to the top of the top speaks to how competitive this world is.

Tanahashi: He was a big guy who could go, so it felt like I was coming from underneath. It was a bit difficult to have a match built around me and win. But I was younger then, had better conditioning, so I was fine just going all out and relying on pure physicality. Now I play around more, I might take other routes to get the match over. 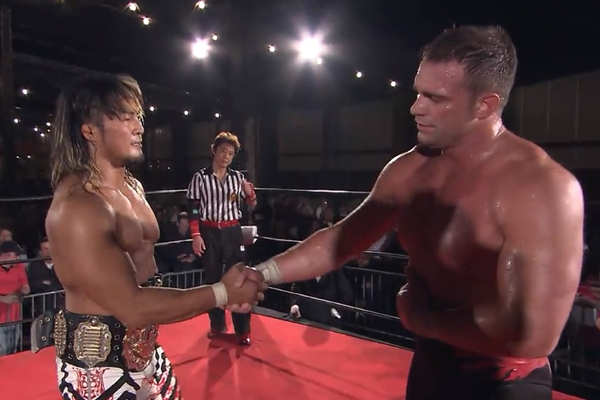 –You won with a High Fly Flow; the crowd applauded for both of you afterward.

Tanahashi: It was the headline match of this big US tour, so there was a lot of pressure on me not to screw up the match. The venue was this warehouse kind of place, but there were quite a few people there, and they were excited for everything.

–There were some 2500 fans in attendance- you ended the night with a trademark ‘Aishitemasu!’

Tanahashi: Right, I had to check first, like ‘do you know “aishitemasu”?’ (laughs). That was the first step for NJPW in the modern international landscape, so it’s wild to think that we went on to sell out Madison Square Garden. Hattori said to me, ‘I want to show you to the American fans’. For a guy that had done that to wrestlers that defined their generations, and for a walking encyclopedia who knew everything to do with wrestling, those were amazing words to hear from him; I just wasn’t so sure of myself.

–It was quite a spot to be put in.

Tanahashi: I mean, I always look like the most confident guy in the room while I’m out there. But a lot of that commitment was really a cdefence mechanism in the face of the boos I had been getting. I have my own insecurities, maybe more than most. It’s not like I ever had the physical ability of an Ibushi or an Okada for one thing. 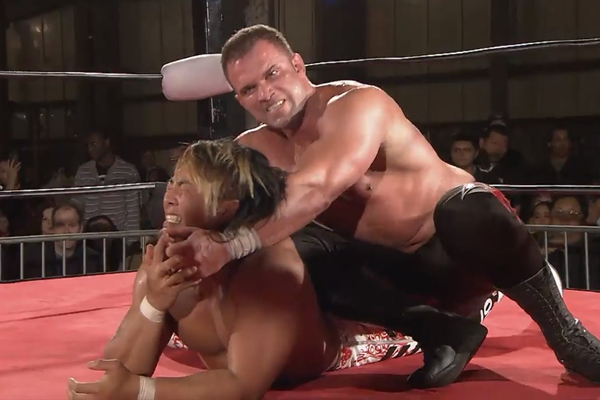 –When you were young, you were called ‘the prodigy of the sun’. But it wasn’t an innate talent, it was work.

Tanahashi: Yeah. To change the subject a bit, I was always aware that there were people more capable than me. So the stance I would always take would be ‘OK, so what can you do with that talent?’. It’s always about bringing out the other guy.

–Make the other guy shine, and you shine yourself.

Tanahashi: You can’t have a match without an opponent, so the match has to be built around having your opponent shine.

–To get back to the US tour, another highlight was the establishment of the IWGP Intercontinental Championship, won in a tournament by MVP. Kazuchika Okada was also a part of the lineup.

Tanahashi: He was trying to get bigger at the time. He had a bit of facial hair, and those long black pants. It was like you could look up foreign excursion in the dictionary and see a picture of him. When he came back, he was a different man though.

–This was a far cry from the Rainmaker.

Tanahashi: Well, he arrived on that after going through those trials abroad, and he came to the right choice for him in the end.

–You never really got that lengthy excursion. How do you think it would have gone if you had?

Tanahashi: I was a big fan of Ultimate Warrior back in the day. I think you’d have seen me work on my muscles and wrestle a really American style. Less about making my opponent shine and more about making my pecs shine!

Ace’s HIGH will take a week off for Wrestle Kingdom 16 night two.