A Block rolls on in Aomori

The Best of the Super Jr. tournament continues apace with A Block in action after just one day off Friday. Night three sees the first third of the tournament end, and all ten wrestlers looking to take charge into the demanding middle phase of the league. 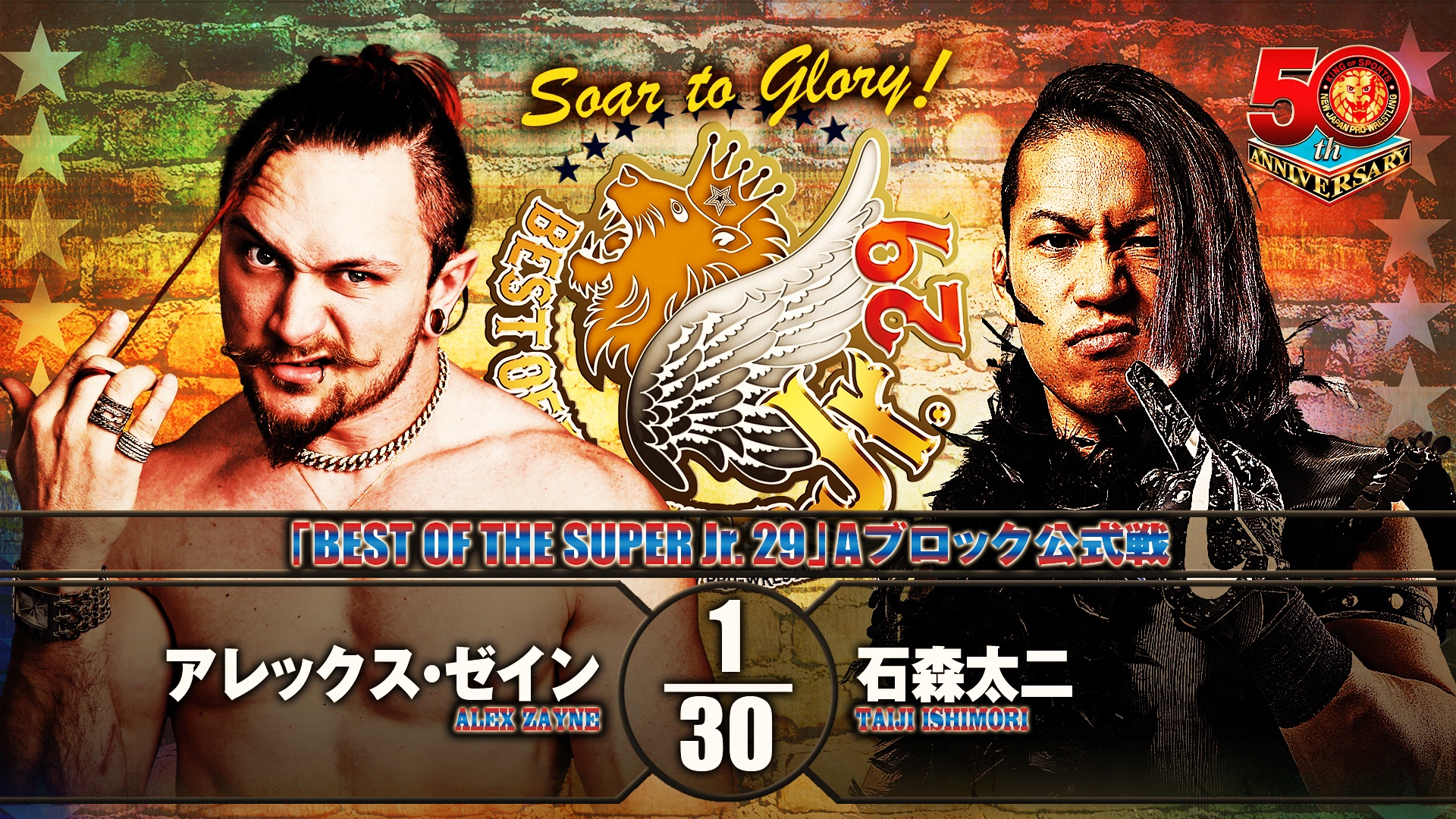 After perfect starts to their respective campaigns, someone’s ‘oh’ has to go in our main event between Alex Zayne and Taiji Ishimori. Any thoughts that Alex Zayne would have difficulty adapting to competition in Japan have been dispelled in the first week in the tournament, as ‘The Sauce’ has quickly absorbed himself in Japanese culture, won the hearts of fans, and defeated two of the most devious opponents in the entire tournament in the form of Yoshinobu Kanemaru and SHO.

Those results are a clear sign that IWGP Junior Heavyweight Champion Ishimori will have his hands full in Aomori. Still, with the Bone Soldier getting over the mental block that Ryusuke Taguchi’s mental gamesmanship posed in Sendai, the champion will be in high spirits Saturday night. Even the most expert gameplan gets exposed by Ishimori, but can Alex Zayne’s unique brand of chaos lead to an upset champion? 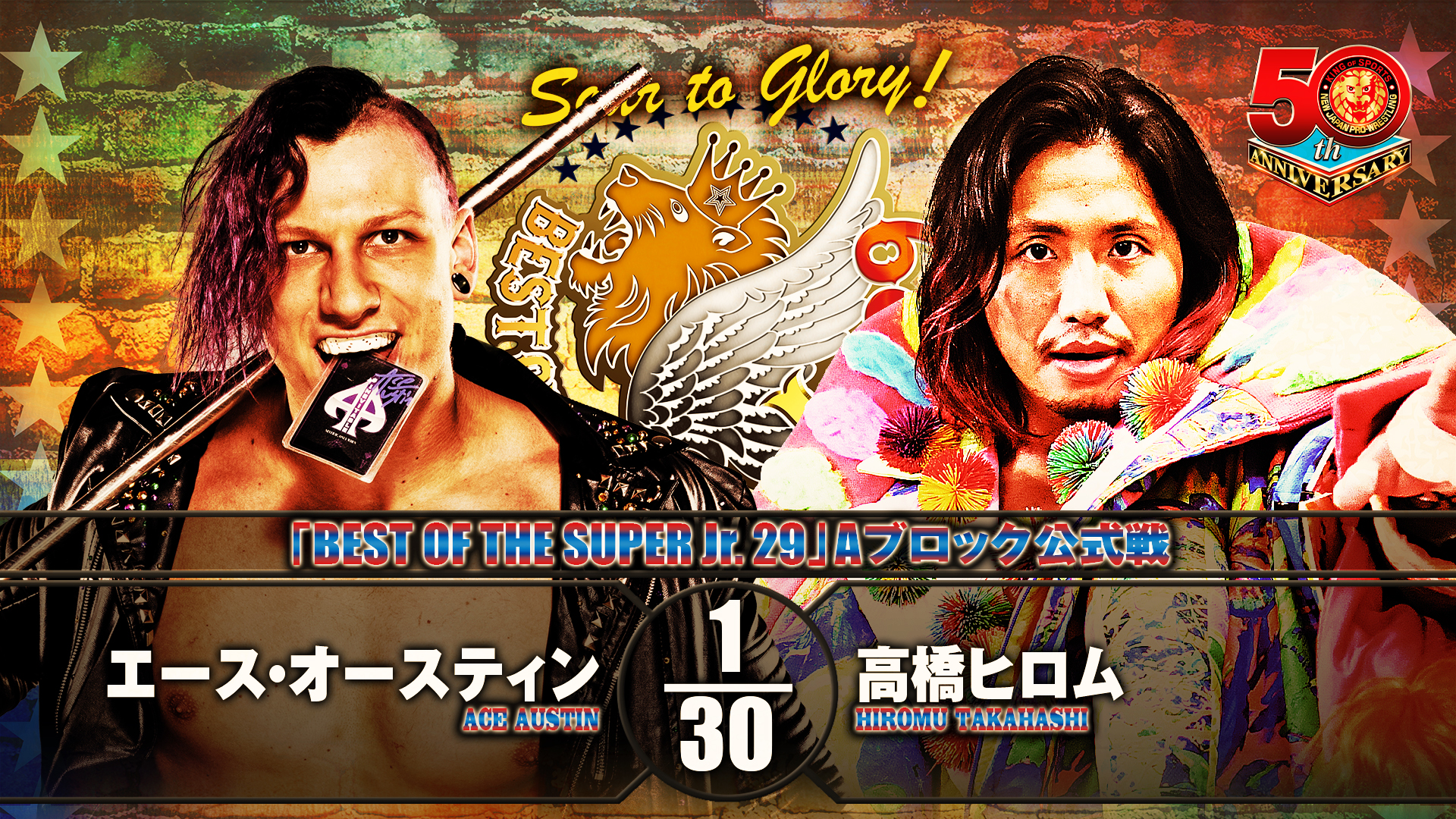 On an unpredictable night, one thing we do know is that only two at most will end the evening on a perfect score of six points, as all four perfect runners so far are facing off. In Ace Austin’s case, that means his toughest match so far in the form of Hiromu Takahashi. In one corner is the unprecedented Austin, a three time X Division Champion at just 25. In the other, a three time Best of the Super Jr. winner looking for his own unprecedented fourth trophy. Will Austin derail Hiromu? Or could Takahashi earn himself a potential future title opportunity? 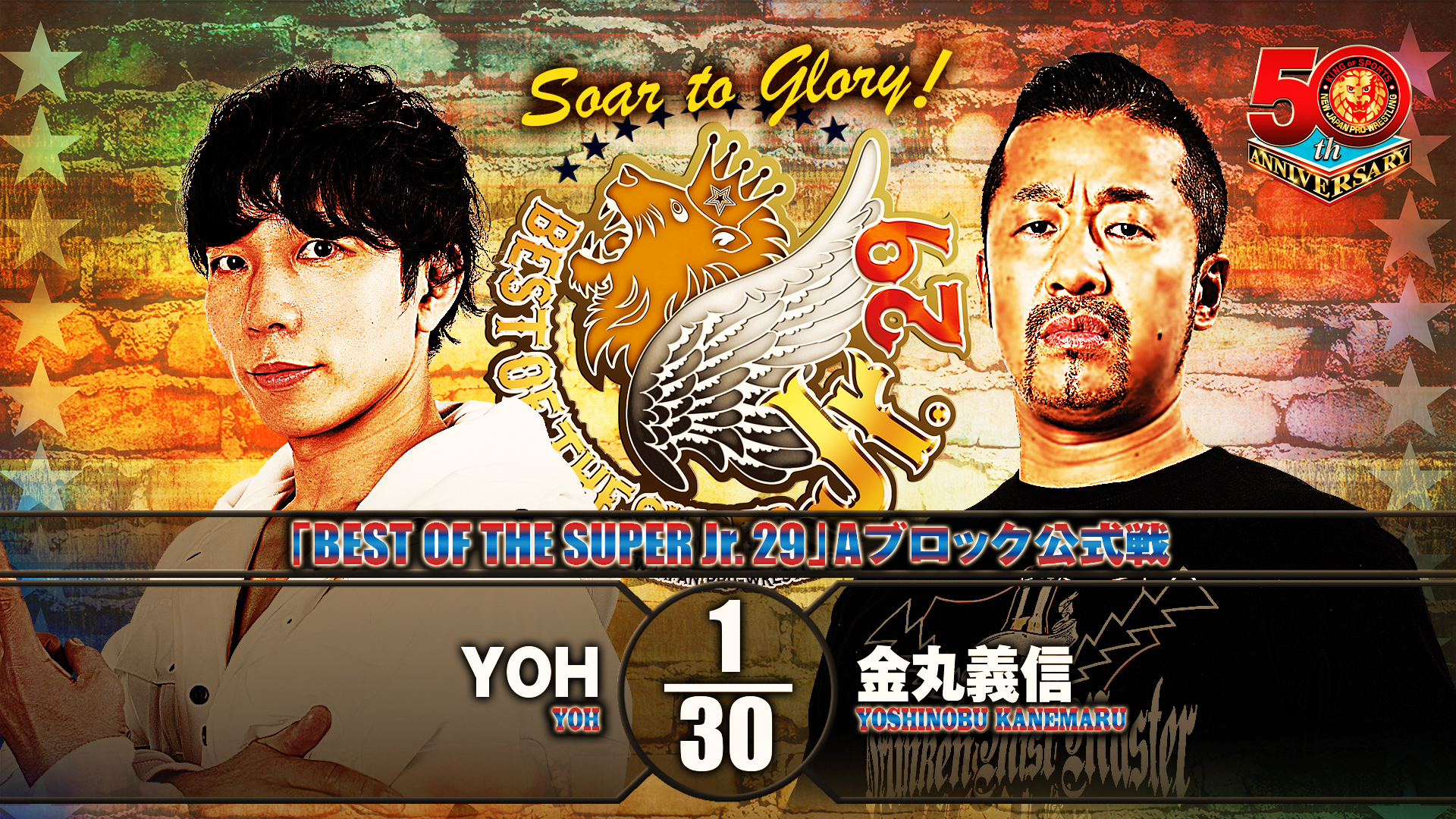 After YOH’s confidence was rattled going into BOSJ, and further shakes with a night one loss to Taiji Ishimori, a Direct Drive to Clark Connors would see him on the board, and in high spirits as he heads into this bout with Yoshinobu Kanemaru. Further buoying YOH’s spirits tonight is the knowledge that he’s undefeated against the Heel Master in two prior BOSJ meetings. This year, could Kanemaru be a part of another seven match win streak for YOH, or one even longer? Or can third match be the charm for Kanemaru where it comes to getting on the points board? 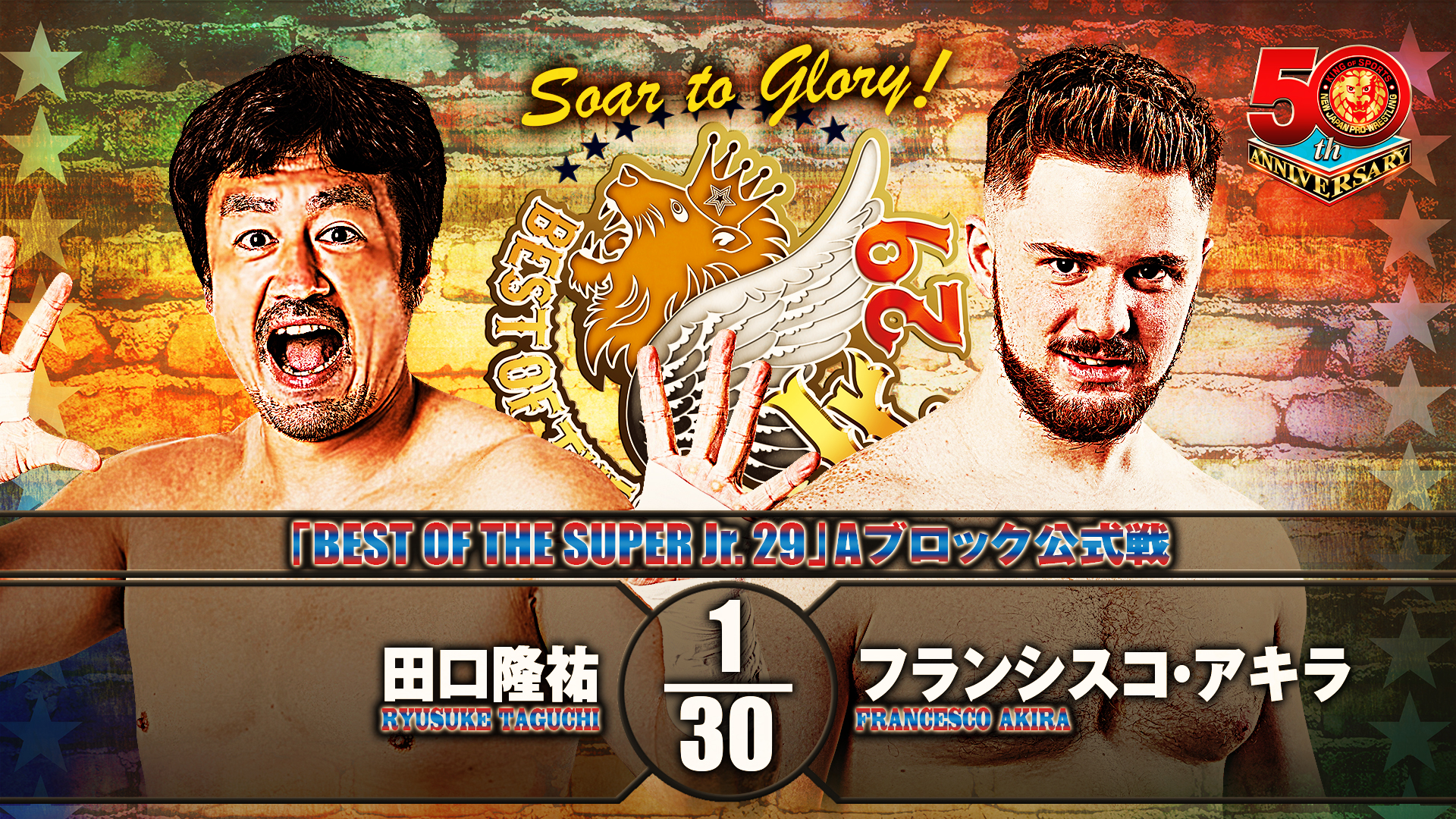 ‘I’ll take great care of the butt’ was Francesco Akira’s pre-tournament comment on Ryusuke Taguchi and the… unique style he tends to bring to the table. Taguchi can say he did the same in the first two matches of his campaign, but the self proclaimed ‘ass-lete’ has fallen short of the mark in his outings with Hiromu Takahashi and Taiji Ishimori thus far. Vowing that this is the match that he really, really will take completely seriously this time, will it also be the one where he gets the win, or can Akira bounce back from his defeat in Sendai? 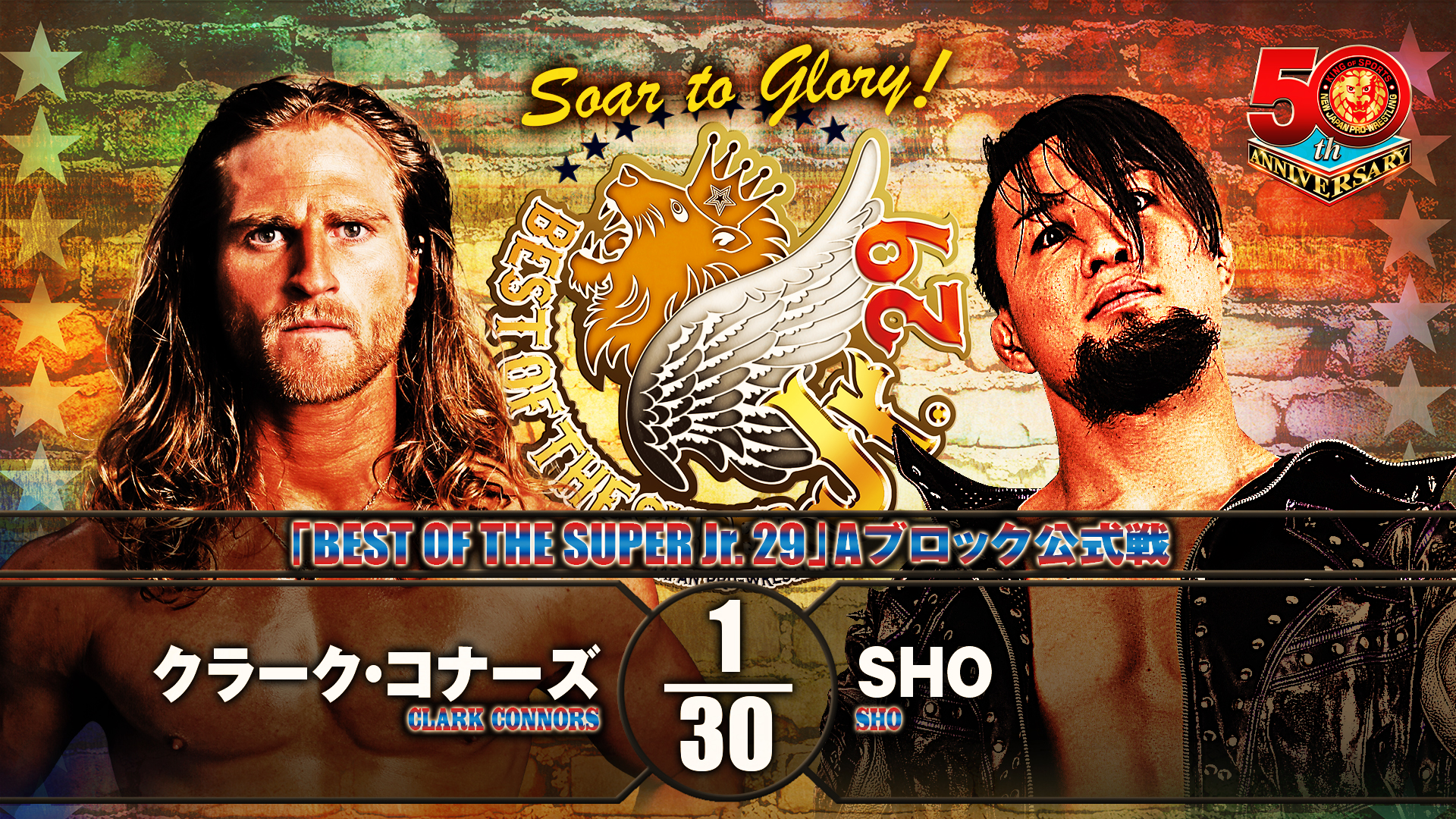 The first tournament match of the night will see either Clark Connors or SHO break their tournament duck as they face off in a bid to get their first two points. SHO has found every attempt at a shortcut in this tournament, from wrench use to the presence of Dick Togo defused by first Francesco Akira and then Alex Zayne; can he fare better against another tournament debutant in Clark Connors? Or will it be Connors, frustrated after putting together strong gameplans that just fell short against Ace Austin and YOH, pick up his first win? 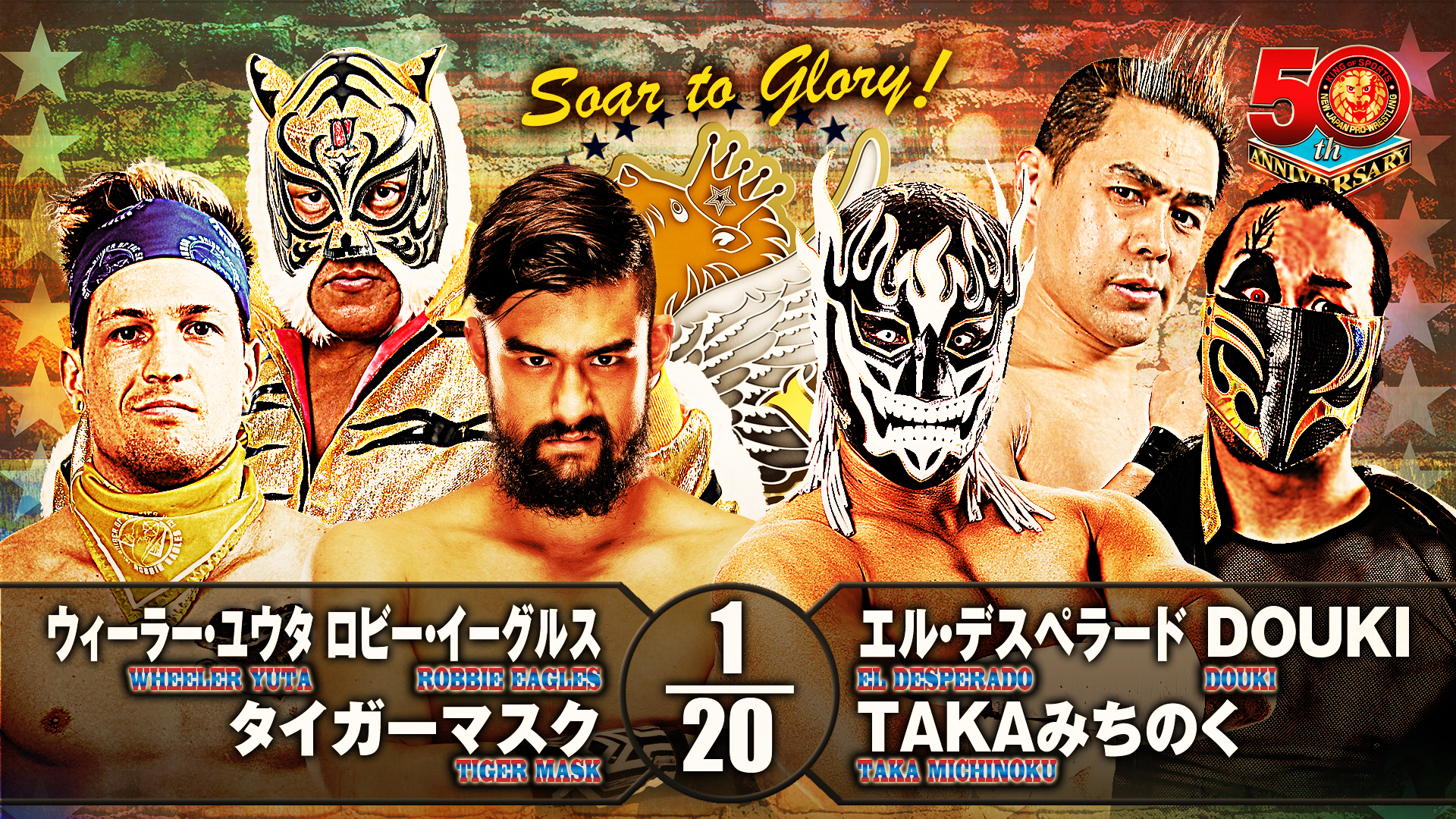 Despite demands from Robbie Eagles for a future ROH Pure Championship match with Wheeler Yuta after his B block opening night victory, the two are forming an impressive team so far in undercard tags, with them combining en route to Yuta’s first victory in an NJPW ring a couple of days ago in Sendai. Now the two are joined by Eagles Flying Tiger partner in Tiger Mask in a winnable trio opposite TAKA Michinoku, and the side of El Desperado and DOUKI that have been at odds ever since tournament lineups were revealed as they await their singles match next week in Chiba. 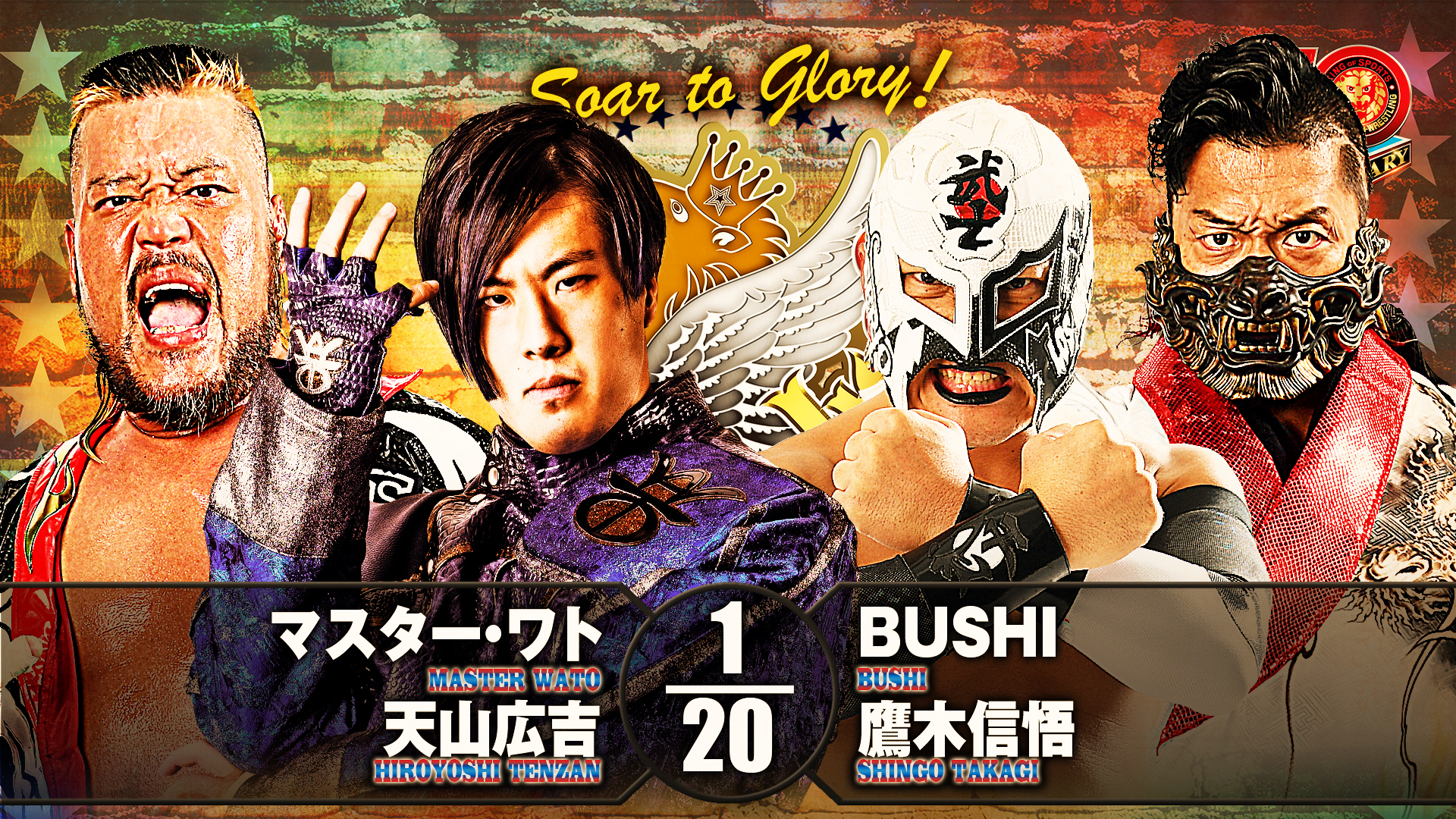 A preview of Master Wato and BUSHI’s third BOSJ meeting Sunday night sees Wato team up with mentor Tenzan while BUSHI combines with KOPW 2022 holder Shingo Takagi. Wato has an intense history with BUSHI, and that will come through both in tag action and Sunday’s tournament meeting. 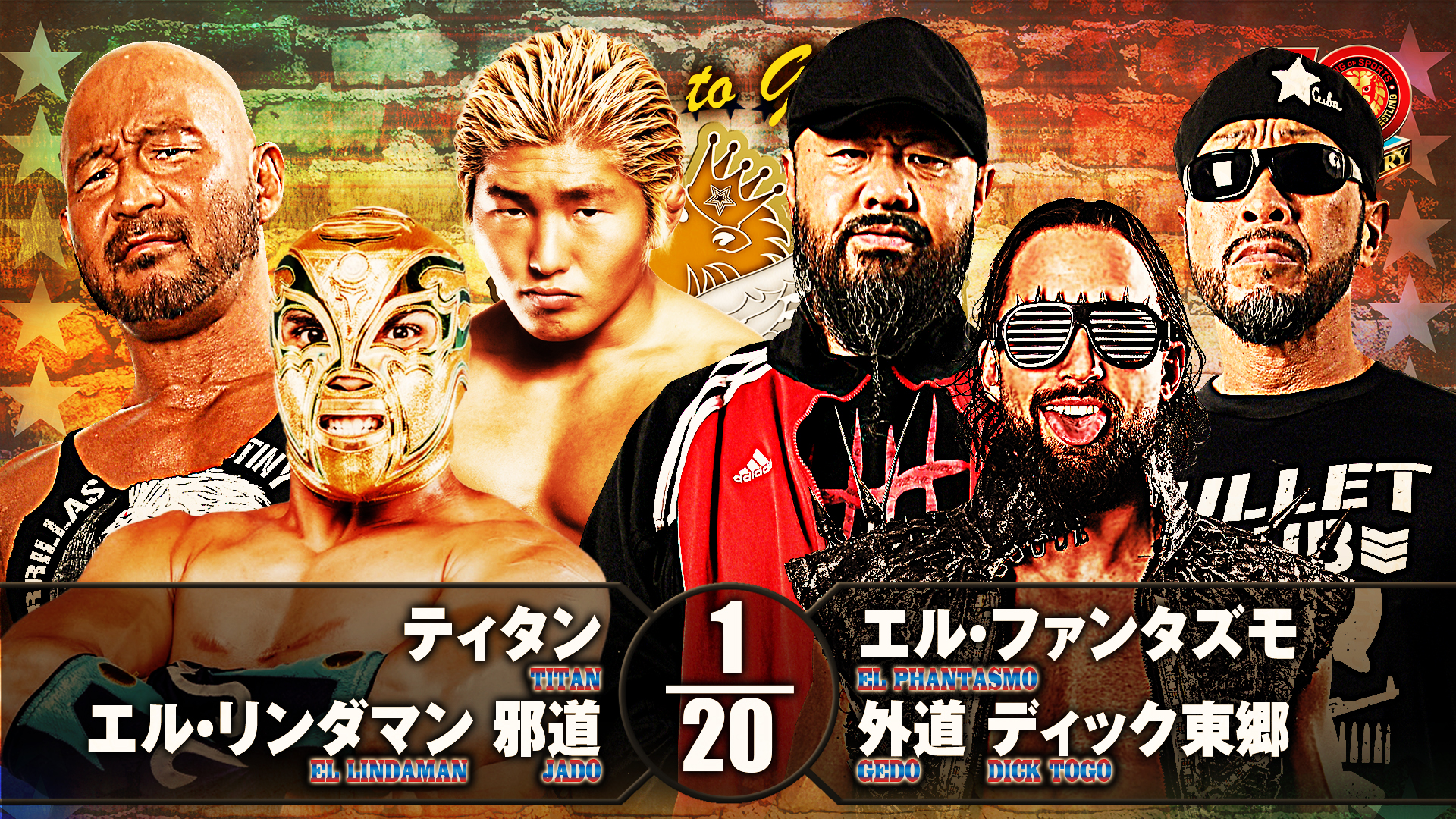 The dynamic trio of Titan, El Lidaman and Jado that left their mark on BOSJ opening night in Nagoya will take on BULLET CLUB’s Gedo, Dick Togo and El Phantasmop in the opneing match. Jado has been the glue in successful trios so far on the BOSJ undercards; can he help Titan leave a mark on ELP before their Sunday clash?