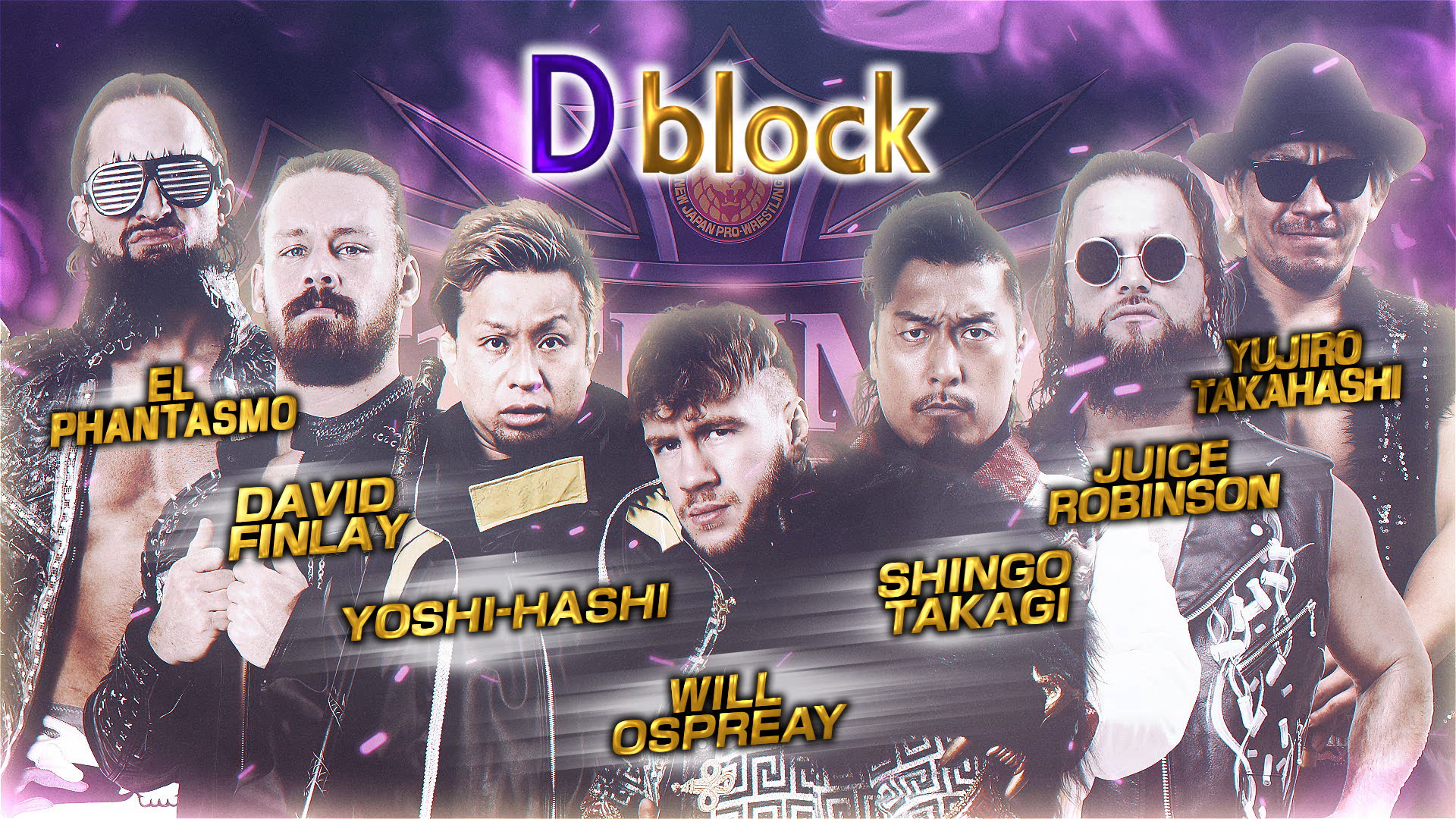 Rounding up our G1 Climax preview is D Block. Some of the very best are left for last, as this unpredictable group of seven will all be going all out for a spot in the final four.

Rare are the times when the chip on Will Ospreay’s shoulder is not prominent, but this year’s G1 Climax sees it showing more than ever. In a year where he is earning worldwide recognition as one of, if not the very best wrestler on the planet, his incredible performances have been let down by controversial decisions and unlucky circumstances, all culminating in him entering G1 Climax 32 as the uncrowned IWGP United States Champion.

While the physical belt sits on the shoulder of Juice Robinson, Ospreay will be planning to wrestle every match reminding everyone that he is its rightful holder. Meanwhile with the G1 Climax being the only singles accolade that the Commonwealth Kingpin has yet to obtain in his already remarkable career, a first time trophy would sit very nicely with Ospreay indeed.

While Ospreay vs Juice will have immense attention invested in it, in Ospreay’s mind it is a battle that he’s already won, while with Shingo Takagi in Osaka unfinished business remains for both men. After a classic at Dontaku in 2021, Ospreay was indeed victorious over the Dragon, but the damage dealt to the United Empire member was so great that he was forced to relinquish the IWGP World heavyweight Championship immediately afterward. With another world title brought into the mix, there was a lot between Shingo and Will that needed to be settled, but Takagi losing the championship to Kazuchika Okada on January 4 meant fans were denied the continuation of one of wrestling’s most incredible rivalries. Now Osaka will see what the Tokyo Dome did not, and it’ll be a war for two critical points.

YOSHI-HASHI’s first championship win, the NEVER 6 Man titles in August of 2020, saw him turn the corner as a competitor. Wrestling with a confidence and swagger that he had lacked for so long, the pieces seemed to finally come together for the Headhunter not just as a tag but as a singles competitor as well. Indeed, when he battled partner Hirooki Goto in Korakuen Hall during G1 Climax 31, it was YOSHI-HASHI in the senior, encouraging role in the ring. The only issue was that his win/loss record didn’t reflect his efforts in the ring. This year, where a condensed block field makes every win even more important, might YOSHI-HASHI be the ultimate underdog for final four contention?

Having recently relieved HOUSE OF TORTURE of the NEVER 6 Man Openweight Tag team Championships, YOSHI-HASHI will be more than willing to further press the point against the Yujiro Takahashi in Hiroshima on August 9. By the same token, the Tokyo Pimp will likely be pulling out every short handed stop in order to gain his side of miscreants another shot with a singles win late in the tournament.

Shingo Takagi enters G1 Climax 32 not with the IWGP World Heavyweight Championship that he held going into last year’s tournament, but with the KOPW 2022 trophy. After the trophy was a figure of fun under Toru Yano, Takagi has helped redefine the prize through memorable battles with Taichi, and now carries the standard of King of Pro-Wrestling into pro-wrestling’s toughest tournament. If any prize would be more appropriate for Shingo than the KOPW trophy, it would be the G1, but in the meantime more KOPW contenders may reveal themselves over the coming month.

Shingo will fight like a champion all the way through his campaign, but perhaps his last match is one deserving of most attention. When Takagi drilled El Phantasmo with Last of the Dragon at Forbidden Door in Chicago, he created a deep seated thirst for revenge in ELP, who makes his debut G1 entry with this tournament. Three years ago Takagi was in the same spot as a junior heavyweight competing in the G1, as was Will Ospreay for that matter; with final matches against Hirooki Goto and Hiroshi Tanahashi respectively, Ospreay and Takagi all but sealed their future fates as heavyweights. If ELP entertains any thoughts of making a similar transition, Shingo will be more than happy to show him that the heavyweight ranks are demanding indeed.

Yujiro Takahashi’s recent tournament performances have shown that there is no depths to which the Tokyo Pimp will not sink- just ask Tetsuya Naito after the New Japan Cup first round where Yujiro did everything to try and steal victory- but also that he is not completely lacking in pride, as Jay White found out to near defeat in 2020. Yujiro has long odds when it comes to making the final four, but with a record of upsets bookending his G1 campaigns, he is a dangerous man to look past.

G1 Climax 31 was topped and tailed by shocking results for Yujiro Takahashi. His first league match ended in an upset win over Kota Ibushi, while Yokohama would see him eliminate Shingo Takagi at the end of the tournament through a devious double countout, designed to keep BULLET CLUB compatriot KENTA in the hunt. heading to a critical point in the league, Shingo will be extra wary as he goes into Yujiro’s last block match on August 13, and Takagi will certainly have a banana skin ready for the Dragon to slip on.

While several champions will be making their appearance in the G1, Juice Robinson will be bringing a belt to the tournament without being recognised as its holder. After a controversial move to strip the ‘Rock Hard’ Robinson as he backed out of a Dominion title match due to alleged appendicitis, Robinson now returns, still with his belt unrelinquished and with considerable ego rattled but intact. With conviction that he is in the right driving him, Juice will be acting out all his frustrations at NJPW management during the next month, and will bring a suitable level of violence to the ring.

KEY MATCH: August 16 vs Will Ospreay

Juice’s last league match will be against the man who is currently recognised as the holder of the belt he carries. Even before the title controversy, Juice’s pinfall win on Ospreay in Washington while the Commonwealth Kingpin’s feet were in the ropes was reason enough to look for a one on one rematch. Now with confusion over the championship status added to the mix, this is a match not to be missed.

After seven long years in NJPW, David Finlay finally gets his shot at the G1 Climax. Where once the ‘Celtic Prince’ would admit that he skated by on his famous family name, a humbling process of discovery, especially during the pandemic, and even more so in the wake of his tag team with Juice Robinson falling apart has led Finlay to tap into a different side of himself. With renewed passion, he isn’t planning on letting this opportunity slip through his fingers.

While Juice Robinson would head to BULLET CLUB and dissolve his team with David Finlay without violence, it was preceded with a veil of untruth, and followed with harsh comments from Robinson, who had nothing nice to say about a partner who ‘was like old fruit on the kitchen counter’. Finlay will not take kindly to the ‘Rock hard’ Robinson looking past him, and will show up to Korakuen looking for a fight.

The only wrestler in 2022 to be in the New Japan Cup, Best of the Super Jr. and G1 Climax, ELP makes his G1 Climax debut with a point to prove. Having come as close as he could have without being in the BOSJ final, Phantasmo wants the ultimate glory in the Nippon Budokan, and in so doing to change perceptions around himself. No longer a figure of junior heavyweight tag fun, ELP will seek to prove himself capable of knocking out the biggest of heavyweight competition- through fair means or foul.

Phantasmo finds himself in the high pressure position of having his first and last league matched on the first and last nights of league competition. With Shingo Takagi and Will Opreay his opposition, both are main event level matches. Yet to be put in the main event on August 16 in the Budokan means to be at the top of D Block contention, and for that to happen he has to do more than steal the show against Ospreay on night one, but steal the first two points of the block away from him as well.