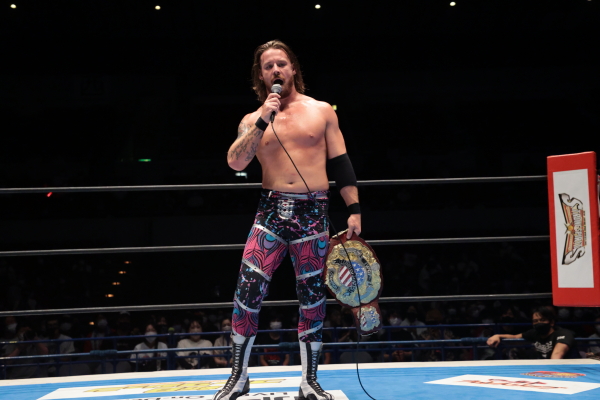 The G1 headed to Hamamatsu on August 2, as five more league matches saw the tournament continue. 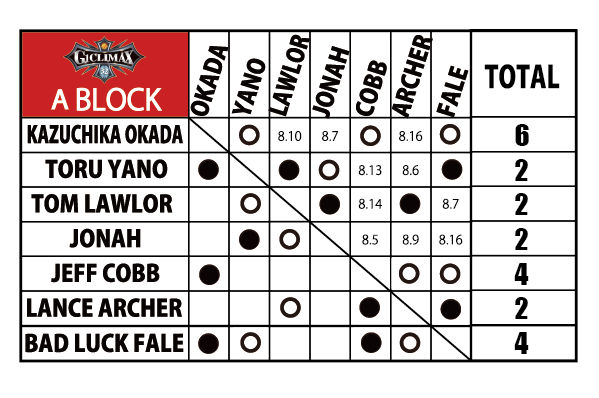 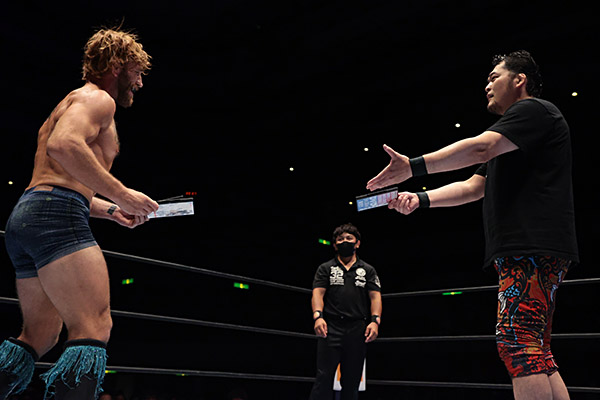 In A Block, Toru Yano took on Tom Lawlor in what was a de facto must win match for both men. Lawlor would bring a peace offering of both Sister Act movies on DVD in exchange for the latest YTR VTR, but was angered when the case proved to be empty. Still Lawlor couldn’t say he wasn’t duplicitous; when Yano tried to grab his foe’s hair for leverage, he only came away with a wig. 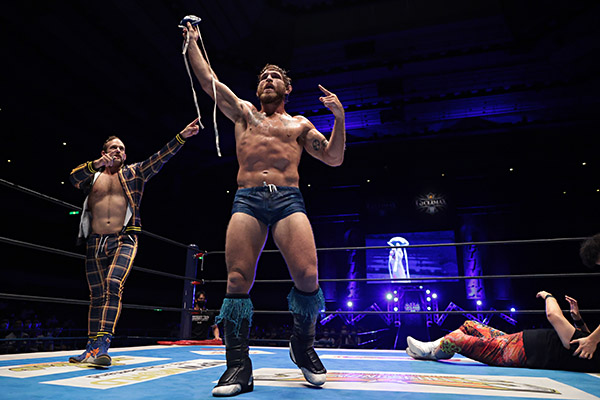 Lawlor was able to punctuate heavy tomfoolery with some heavy knees to the head of Yano, but the CHAOS member fought fire with fire as he sent the Filthy One into the guardrail and taped Royce Isaacs to the ringside steel. A shot into an exposed turnbuckle would do more damage to the former STRONG Champion, but the Onigoroshi Powerbomb was prevented and punished with leg kicks. Yano would plumb the depths and look for a pair of low blows, but Lawlor resisted thanks to what was later revealed as a cup; the NKOTB followed for Lawlor’s first G1 win. 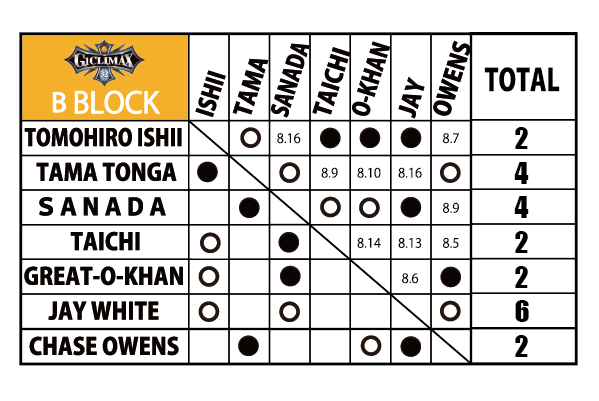 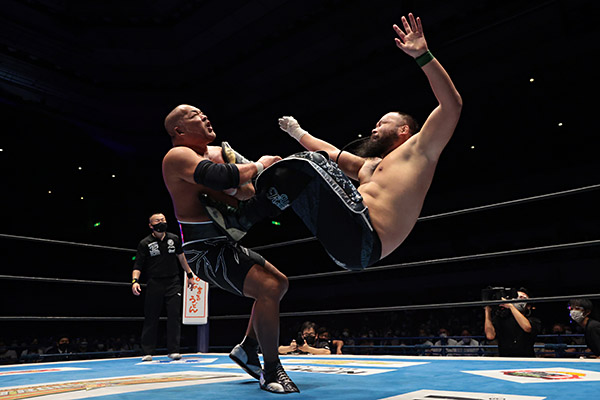 B Block saw two league matches on the evening, with Tomohiro Ishii facing Great-O-Khan in another must win matchup for both competitors. After a tight grappling exchange on the mat, Ishii tried to knock O-Khan down, and did so on a third try with a shoulder tackle. Surprising the Dominator, Ishii went for a heel hook that slowed O-Khan, but when the two traded elbows, it would be the United Empire member with the upper hand. 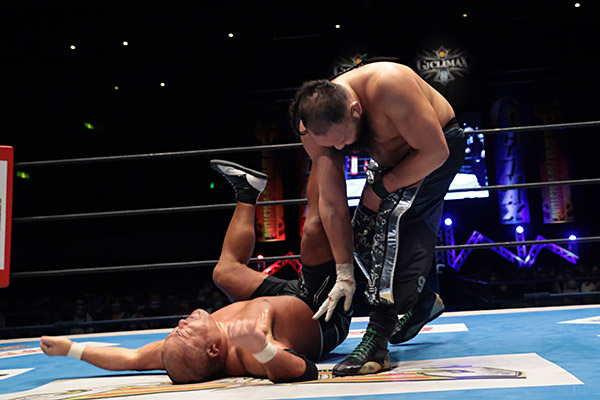 The hits would get harder as neither man wanted to give up control of center ring. Ishii would hit a rare Tiger Suplex in that middle spot before rocking O-Khan with a lariat, but the Eliminator didn’t stay down from the throw, nor some brutal headbutt exchanges. After the Sheep Killer, O-Khan wanted the Eliminator; Ishii resisted, but couldn’t escape a Tenzan Tombstone Piledriver and then the Eliminator for the win. 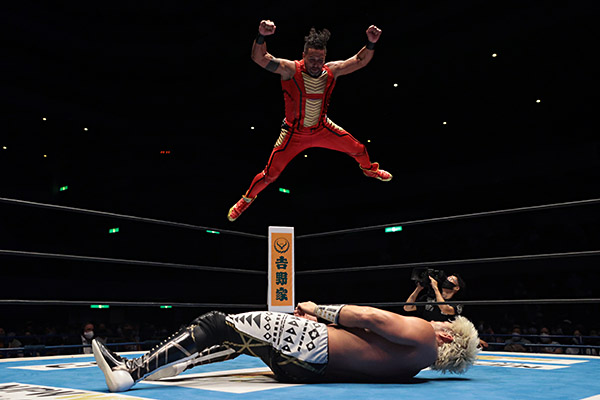 The second B Block match of the night had Tama Tonga looking for his second win, and SANADA trying for his third. Tama would have the most of an early exchange between the two fan favourites, but SANADA would gain control thanks to the Paradise Lock. As he was harried by the Cold Skull’s use of technique, Tonga would go to a series of hard hitting lariats to get back in the match before accelerating the pace with a dropkick, but SANADA did the same, and found a plancha that threatened a countout. 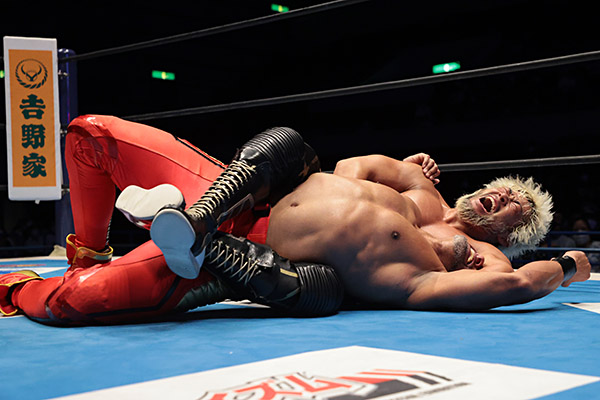 As Tama built with signature offence, a Tongan twist was followed by the SRC and a Supreme Flow from right across the ring, but Tama didn’t hit the killing blow before SANADA fired back with a springboard dropkick and a TKO. As the match became increasingly unpredictable, SANADA’s moonsault found Tama’s knees, but a follow up Gunstun was caught with split second timing into Skull End, Tonga howling in pain before making the ropes. 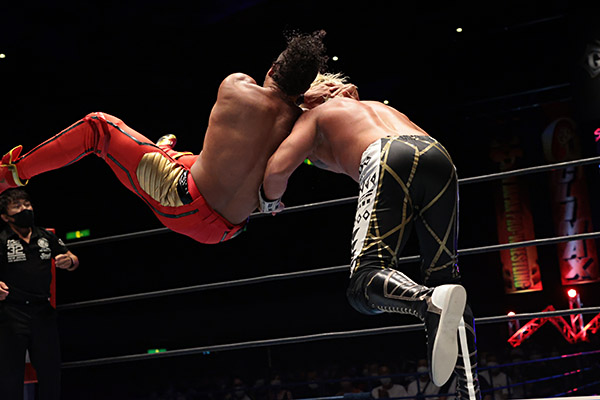 As the match reached the 15 minute mark, Tama and SANADA traded forearms before Tonga got the Villeno DDT for two. SANADA got an even nearer two from the O’Connor Roll, but Tama kicked out and immediately fired off the Gunstun to go 2-1. 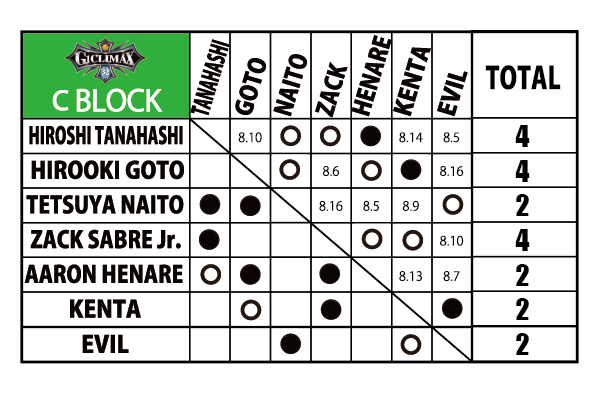 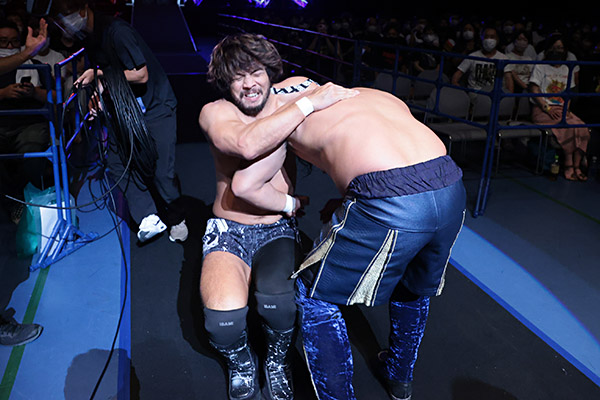 C Block would have Hirooki Goto facing KENTA in the semifinal spot; Goto starting with an early advantage as he ensured things were all business after KENTA eyed up his staff during the ring introductions. KENTA would be frustrated as he headed to the floor, but had a plan; finding the ring bell at ringside, he cracked Goto over the head out of sight of the referee and followed with a DDT on the floor. 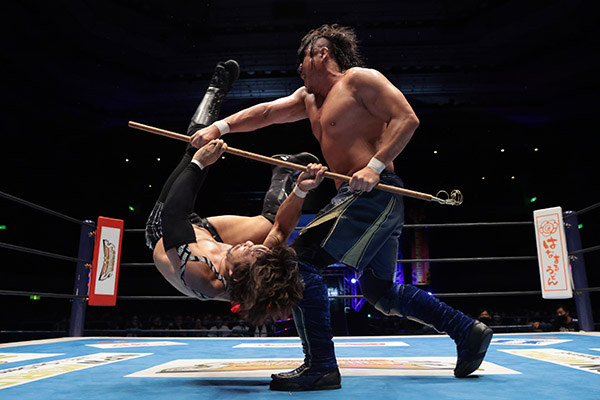 With the upper hand, KENTA punished Goto with strikes and his signature top rope lariat before an STF. Goto was unable to get a look in as he was spiked with Green Killer and then a straight boot and corner dropkick, but the fired up CHAOS member landed a reverse GTR and a wild lariat to get a little respite. Building through elbow exchanges, Goto landed the Ushigoroshi, but as he went for GTR, both Goto and the referee were bumped in the corner. 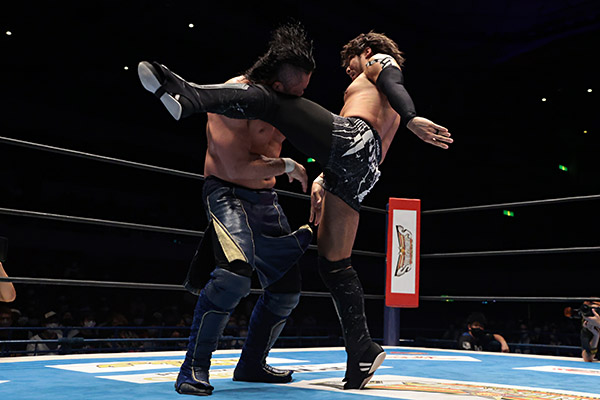 KENTA took hold of Goto’s Jarajara Bo-staff at the 15 minute mark, and was able to use it to escape a one man Shoto in the corner. As the referee came to, KENTA hit a double stomp and went for Go2Sleep, but Goto hung on; the CHAOS member went for GTW but was met with a knee in midair and then the Busaiku knee for a long two. Go2Sleep followed on a third attempt for his first two points in the tournament.

D Block main evented in Hamamatsu as IWGP United States Champion Will Ospreay met the man in physical possession of the belt David Finlay. The result was a furious exchange of blows right at the bell before the fight spilled outside, Finlay in control as he bounced Ospreay off the guardrails. The Commonwealth Kingpin was decidedly on the back foot, but a moment’s hesitation on Finlay’s part as he went to the second rope resulting in a brutal chop that sent him all the way outside. 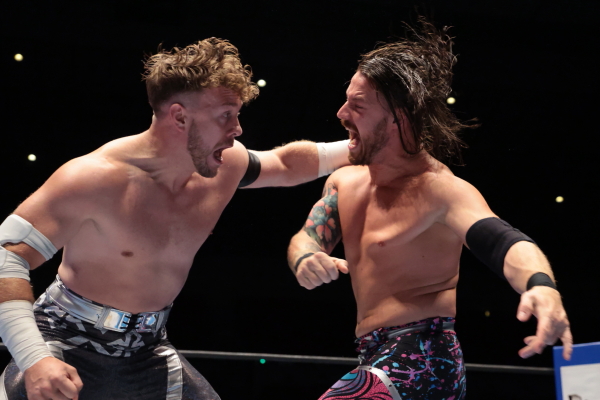 Ospreay homed in on the surgically repaired shoulder of Finlay, who fought back with a barrage of offense, but could not land the Irish Curse, at first countered with a handspring overhead and a plancha, until Ospreay looked for the Chelsea Grin. Using the move to get out from under the control of Ospreay, Finlay would go up for a superplex; the move was delivered with thunderous impact, but Ospreay’s adrenaline surged, and hit an OsCutter onto the apron that took both men out on the floor. 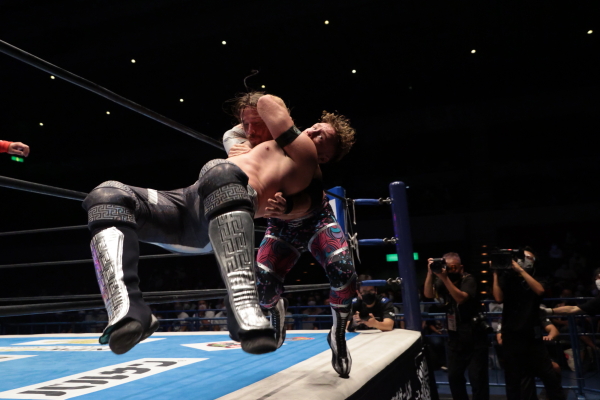 A second OsCutter hit center ring, but only got two for Ospreay; the Briton went for a third, but was too greedy as Finlay landed Prima Nocta. The Acid Drop followed for a long two, and Finlay went for a Trash Panda. Ospreay met with Finlay with a hook kick and then a rising knee, but Hidden Blade was countered with a flash cruicifix and rolled into Trash Panda for a huge victory. 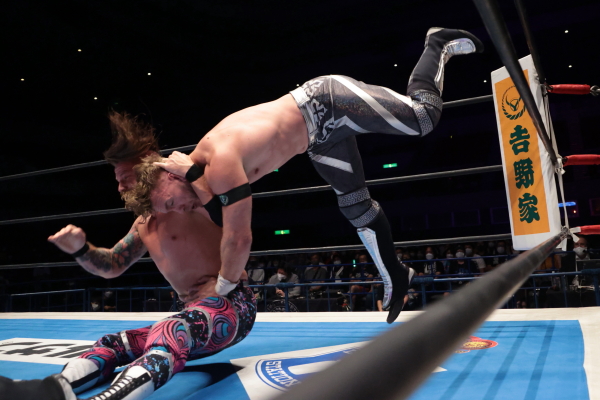 Post match, Finlay returned the IWGP United States title belt to Ospreay before telling him that the next time Ospreay defended the title it needed to be against him, rounding out an explosive night in Hamamatsu. G1 Climax 32 action continues in Ehime Friday, where JONAH faces Jeff Cobb in A Block, Taichi takes on Chase Owens in B, C Block double duty has Tetsuya Naito vs Aaron Henare and Hiroshi Tanahashi vs EVIL in the main event, and D Block will see Juice Robinson taking on Yujiro Takahashi. 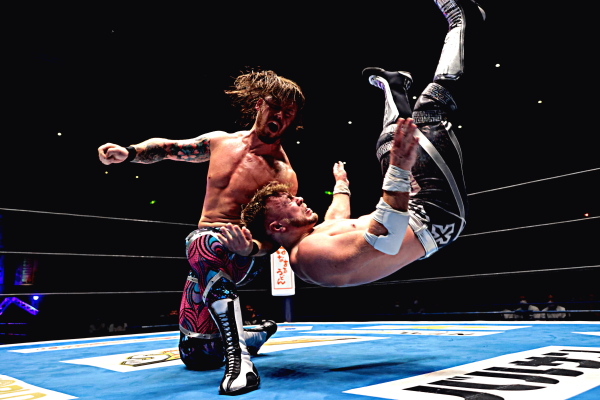