Catch 2/2 move to four in Tachikawa

The main event of the evening would see Catch 2/2 look to retain their undefeated streak against the ‘SAUCEHEARTS’ team of El Lindaman and Alex Zayne. Francesco Akira started the bout with Zayne, and a speed and power clash was evident from the outset, the Italian getting dropped before TJP and Lindaman tagged in. The Public Enemy tried to wear out Lindaman on the mat, but the G-REX Champion was having none of it, and with some snappy judo counters, brought TJP into the red haired corner.

Zayne and Lindaman had rather too much fun biting on TJP’s arm, leading to a miscue and United Empire turning the tide. TJP controlled Lindaman until a neckbreaker saw tags both sides. Zayne wanted the Baja Blast and scored on the second attempt; the largest of the junior heavyweight combatants was able to land a double suplex to both opponents under pressure, but after the resulting tag could not stop an Alley-Oop from the IWGP Champions, and just barely broke up a Mamba Splash on Lindaman.

TJP and Akira primed for the 2×2, but Zayne made a well timed save, and served up Lindaman for an impactful suplex. A massive powerbomb followed to plant Akira, and he and Lindaman connected a gorgeous combination of Frankensteiners suplexes and splashes. The G-Rex Champion cleared Akira with a tope con giro before a German suplex and jackknife combination almost put TJP away; the Cinammon Twist would have done the job but for an expertly timed save from Akira. As Zayne cleared the Italian from the ring once more, the Taco Driver seemed sure to end the match, but a sudden rolling clutch would lead to a sudden pinfall to end the match.

BULLET CLUB’s Ace Austin and Chris Bey were also looking to stay undefeated as they faced Yoshinobu Kanemaru and DOUKI. Kanemaru was aggressive from jump as he targeted Bey’s knees, but the IMPACT representatives quickly seized control, landing the Soar to Glory and then cutting Kanemaru’s fingers with his playing card. The Heel Master would be buried in the wrong half of the ring until a satellite DDT brought DOUKI inside.

DOUKI upped the pace, and a recovered Kanemaru stopped a BULLET CLUB double team to setup a double dropkick and an assisted tope suicida. As the match broke down however, it was the BULLET CLUB side keeping their cool. A corkscrew kick from Bey sent Kanemaru off the apron before Austin launched Bey into Art of the Finesse to move them to a perfect four points. 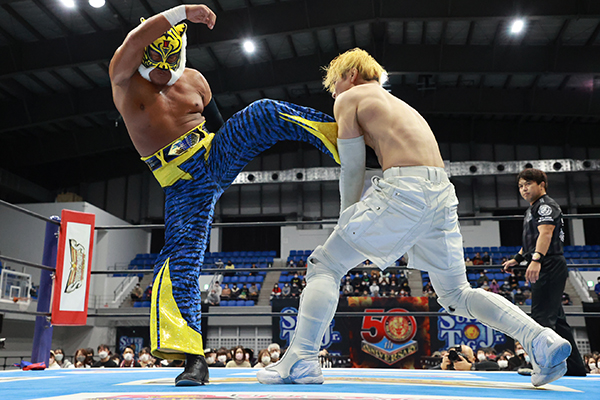 After some growing pains as a duo in their first match together, Lio Rush and YOH looked to get on the board against former junior heavyweight tag champions in Tiger Mask and Robbie Eagles. Some click teamwork paid dividends for the CHAOS pair in the early moments, but a tope suicida from Tiger Mask and a near supersonic tope con giro from Eagles would put Flying Tiger back in control. 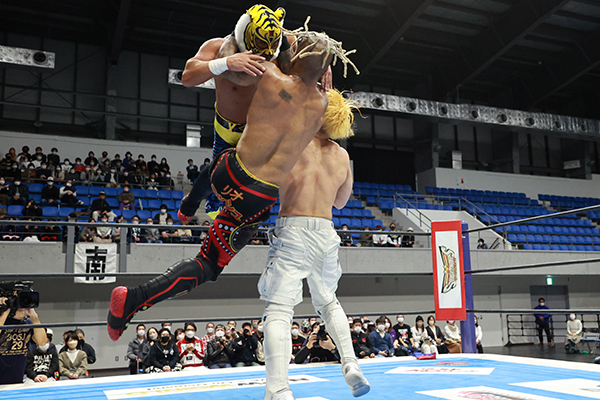 YOH brought the fight back, but Eagles had no mercy for his regular CHAOS teammate. Tiger Mask was typically salty with his strikes, and after being served up by Eagles, a Tiger Driver on YOH. Rush’s attempt at a save was met with short and spectacular shrift from Eagles, but YOH took advantage of the recovery time, and set the Australian up for Rush Hour. Tiger Mask resisted 3K at first, but a second attempt brought Rush and YOH their first two points. 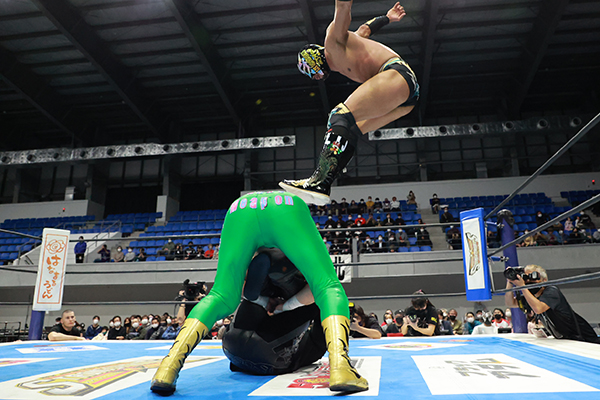 Clark Connors and Ryusuke Taguchi had been working on their own communication through the week, and Connors had brought some beer along to break the ice somewhat. The plan worked in the early going, as Wild Hips set to work on Titan, but an overhead kick to Taguchi allowed for the luchador to bring in BUSHI. As BUSHI escaped Taguchi’s Three Amigos, Connors launched the Coach with an elevated hip attack, setting Taguchi up for the Dodon and then Oh My and Garankle; a rewind kick would get BUSHI free of the hold though, and Titan spotted the opportunity for a huge tope con giro. Moments later, the Angel Inmortal scored for three, and the first LIJ points of the league. 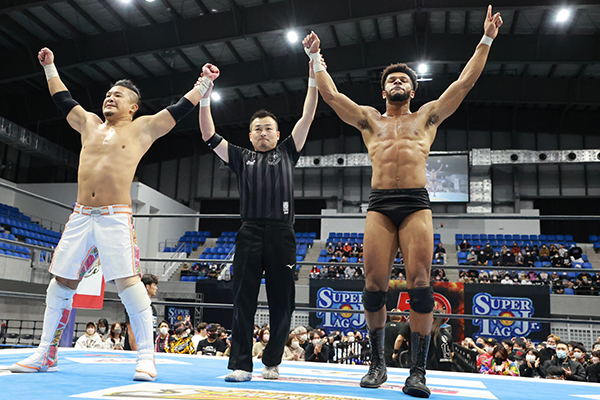 A battle of two teams looking to get their first points, Kevin Knight and KUSHIDA faced Dick Togo and SHO in the first league match of the night. With typical disregard for the rules, Togo and SHO took control of Knight, before the LA Dojo representative got free to KUSHIDA. KUSHIDA and SHO traded offence on one another’s arm, but Togo would ensure that KUSHIDA couldn’t get a sustained advantage, and EVIL and Yujiro Takahashi would head to ringside for added ‘support’. KUSHIDA defused their attempts to interfere, and Knight re-entered to dropkick SHO before a Hammerlock suplex got three.