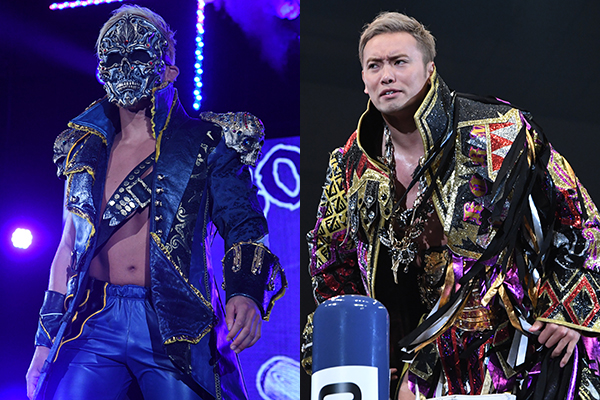 The 2019 Dontaku tour ended in spectacular fashion on the last night of Wrestling Dontaku 2019. With the IWGP championship on the line, fans were expecting a night of fantastic wrestling, but a number of suprises and shocks throughout the night thrilled both the fans in attendance and those watching at home. 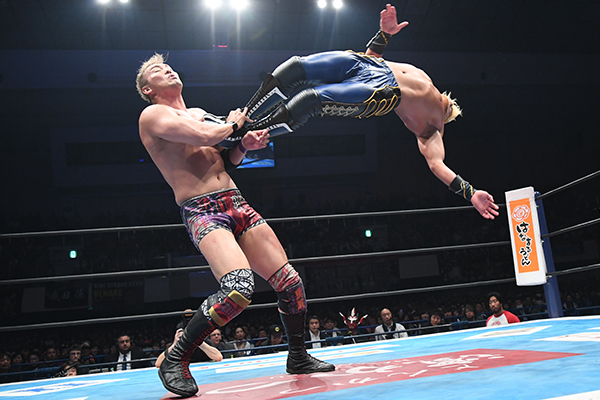 The 69th IWGP Heavyweight Champion defended his title in style in his match-up with SANADA. Both wrestlers drew upon their extensive experience in Mexico and brought a level of inventiveness and character to their moves in the ring. The crowd in Fukuoka was evenly split between supporters of Okada and SANADA and the match itself was a close-run affair but the heat remained consistently high throughout the whole affair. At one point, Okada sent SANADA over the safety barrier only to fly though the air and deliver a devestating cross body on his challenger.

From there the match became almost like a chess game with both wrestlers trying to out-manoeuvre the other, exchanging pin-fall holds with each other. By the time 25 minutes had passed the match moved up into an even higher gear as the two started to attempt to finish the other off but it was SANADA’s sadistic application of his Skull End finishing move that seemed to spell doom for the Rainmaker. However, Okada managed to fight back and land the rainmaker on his challenger. Addressing SANADA on the microphone after the match he talked about his budding rivalry with SANADA and his plans before the future.

Before he could finish his thoughts however, a video featuring Chris Jericho was payed to the crowd where he challenged Okada to a title match at Dominion on June 9th, a challenge which Okada accepted. 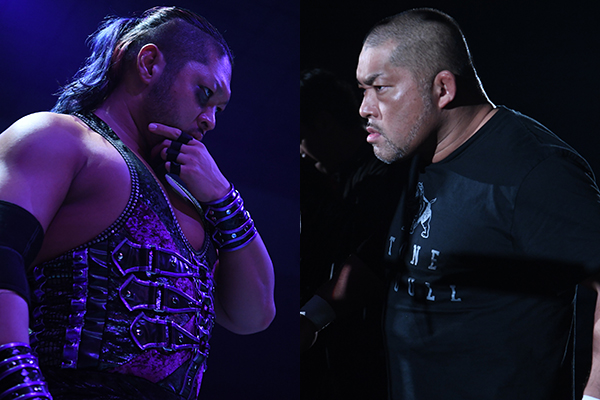 Both wrestlers had been going back and forth in a vicious war of words and actions and the match ended-up not disappointing expectations. In typical strong style, lariats, suplexes, chops and head-butts collided in a scintillating display of sheer strength and power. Heaping brutality upon brutality, neither wrestler seemed willing to give an inch in what has been a grudge match for both wrestlers. It was the stone pitbull who emerged victorious after the brawl when he crushed the King of Darkness with a vertical-style brain-buster.

Prior to the 7th match, Hiroshi Tanahashi surprised the crowds with a sudden appearance. In the ring he talked about his trials and tribulations, but promised to challenge for the IWGP Heavyweight Championship and announced his return at the Best of the Super Junior finals in Ryogoku Sumo Hall. However Jay White appeared and told the ace that in fact, he was next in line. Viciously attacking the ace, Jay targeting the former champ’s injured elbow. 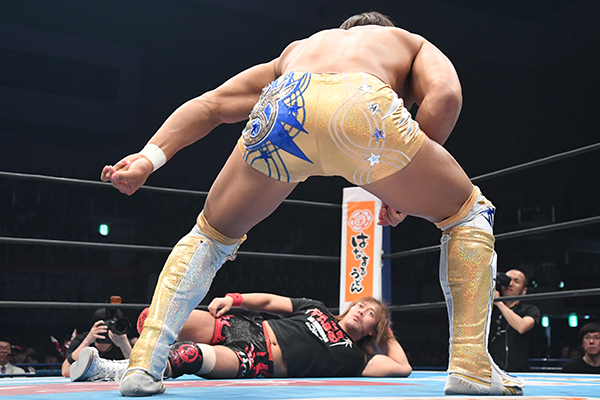 With tensions heating up between the IWGP Intercontinental Champion and his challenger, the match got off to a blistering start. The junior partners, however took the brunt of the initial assault with BUSHI targeting YOH’s chest and Takagi and SHO battering each other senseless. However, when the two heavyweights got into the ring, the heart and resolve of both men proved to be outstanding and each unleashed devastating move after devastating move on the other.

After the match Naito requested that Ibushi face him on June 9th in Osaka for the IC championship. Ibushi answered with an emphatic “Si!”

Before the match started, the mysterious X made his entrance, being revealed to be the world-wide superstar wrestler, El Phantasmo. Ospreay in particular was shocked at this development, the two having a relationship going back years. Holding out his hand in a symbol of friendship, Ospreay was suprised to the reply be a “too sweet.” The new BULLET CLUB member proceeded to set the house on fire with some death-defying feats of athleticism. Out pacing even Will Ospreay it was he that got the pin over the Aerial Assassin. The future looks bright for this NJPW debutant. 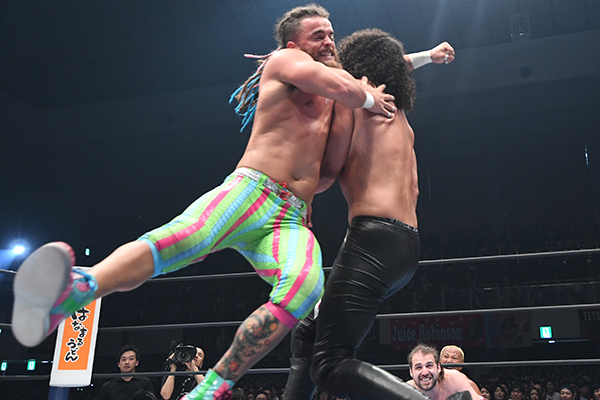 The members of BULLET CLUB came out for the second match in a row eager to avenge their losses so far in the nights in Fukuoka but it was not to be. Juice and Mikey showed particular chemistry when they were taking out their opponents and it was the flamboyant one who emerged victorious. After he proceeded to head to the ramp, the same mysterious video from last night played. 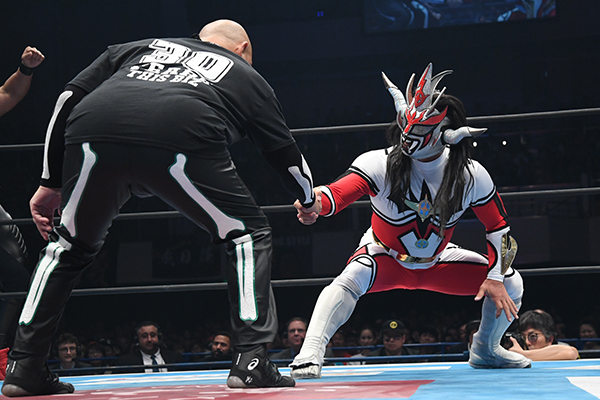 In his last appearance at a Wrestling Dontaku event in his career, Jyushin Thunder Liger took centre-stage in this match-up against BULLET CLUB. His opponents however, took out every weapon in their underhanded arsenal to spoil the night however. Tanga Loa in particular showed a sense of viciousness when attacking Togi Makabe. It was Toru Yano however that ended-up the victor using similarly sneaky tactics when he rolled-up Jado. 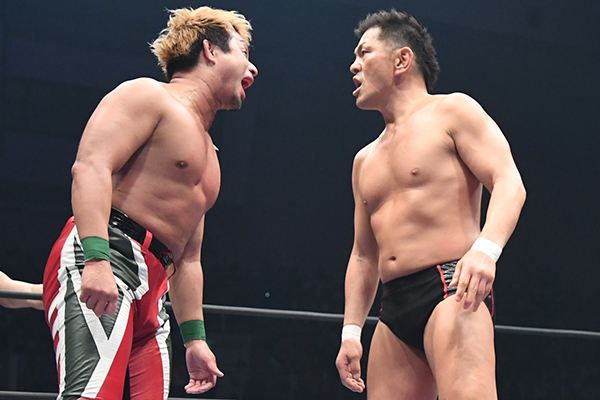 Although the match started in a legitimate fashion, the match quickly devolved into a brawl between the two teams. Although there were some exciting exchanges between Suzuki and YOSHI-HASHI, it was the interactions between Taichi and Toa Henare,  that were stealing the show. Although Henare had hinted backstage that he was interested in challenging for the title, the holy emperor seemingly crushed his dreams by pinning him. 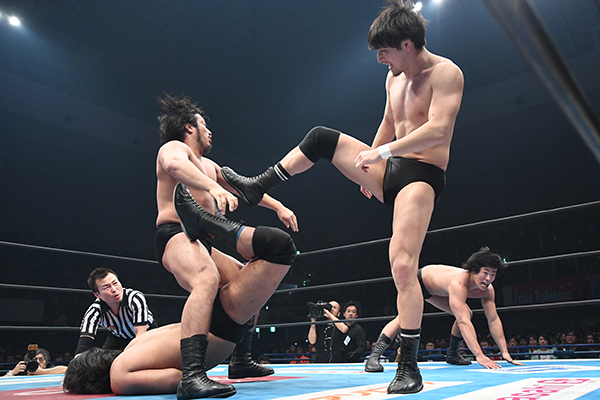 The Young Lions came out first and equipped themselves well. The experience of the senior lions proved to be crucial however, as Umino once again used his new finishing move. After the bell, Narita took out his anger on Uemura, kicking and stomping him.