In the second part of our explosive interview with Jon Moxley, the IWGP United States Champion talks more about just why he came to NJPW, and his plans for the future, starting with the G1 Climax. 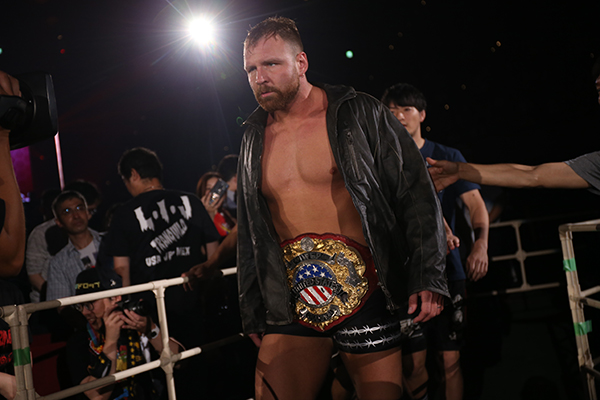 — Now you’ve won the US Championship on your first try, what are your plans?

Moxley: As far as the immediate future, you saw what I said and did at Dominion. In general, my plans for wrestling and life going forward are to take chances and have fun. You only get one life, so I want to take every opportunity to drink it in; have experiences, learn, grow and strive to be better as a person, athlete and artist.

–You coming to New Japan was huge news. Were you happy with the reaction you got for your debut?

Moxley: In the building, it couldn’t have been better. The buzz when I walked out, the reaction for the finish of the match and the respect the fans had for the fight in the ring was incredible, and I’m grateful for that.

–Is there any particular reason why you chose NJPW?

Moxley: I’ve always been a fan of NJPW. I loved their wrestlers and matches. When I was in Florida I was obsessed with watching Hiroshi Tanahashi and Minoru Suzuki. To me NJPW is pro-wrestling, and I knew I needed to be here. 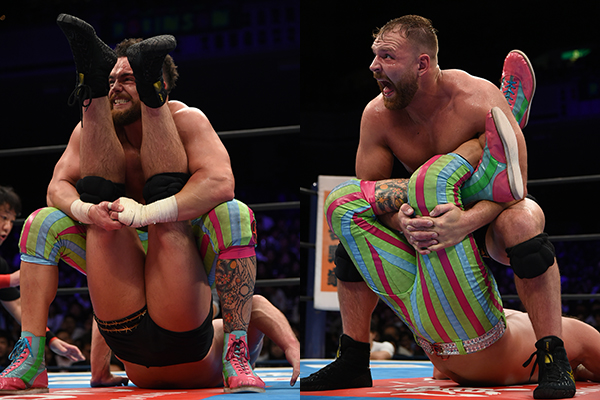 –During the match with Juice, you landed a Dragon Screw and put Juice in the Texas Cloverleaf. Was Tanahashi in your mind when you did that?

Moxley: I’ve always liked the Cloverleaf since I saw Dean Malenko do it. I knew it was a Tanahashi move, but I was working on Juice’s legs, and it was an instinctual thing, a tool in my toolbox to pull out.

–You mentioned Minoru Suzuki, and he actually tweeted that he would like to fight you…

Moxley: Interesting news to me. I would love nothing more than to share a ring with him. He snaps my arm, cool, it was an honour. I snap his, and I’ve snapped the arm of the great Minoru Suzuki. So either way it’s a good result for me and the fans. That idea, it’s just two dudes who… I feel I understand him. The pleasure he gets out of inflicting pain, and the pleasure he gets out of being in wars. I saw him at WrestleMania weekend live and in person at an independent show. It was a wild 20 minute brawl with sweat flying everywhere and I loved it. I’m a big fan of his.

Maybe sometime this summer we can spend some time together and have him show me a few tricks of the trade to take with me back to America. I’ve got an open mind.

–There’s a lot of wrestlers in NJPW that are roughly the same age as you. Okada, Naito, SANADA, Ibushi. Are there any of those wrestlers that you’re interested in?

Moxley: All of those guys are amazing in their own ways. NJPW is one of the most stacked rosters you can find anywhere. I love being here, just as a fan. At Dominion, I was in the ring in the first match, so to be able to spend the rest of the night just as a fan, that was pretty cool. 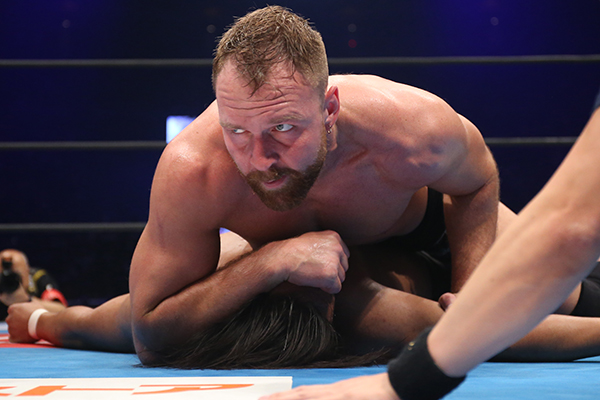 –What do you think sets you apart from that field of wrestlers?

Moxley: I like to think that there’s no man on planet Earth that can break my will, or make me quit. Can I be beaten, for sure. But it’s a long night for you to beat me. It’s going to take everything you have because I’m going to keep coming at you until I have nothing left. In terms of heart and unwillingness to back down, maybe some might be equal to me, but certainly nobody greater.

New Japan has a pecking order. Rankings. You lose, you fall down, you win you move up. The goal is to get where Okada is. For me, I have nothing to lose. What’s the worst that can happen? I feel like I’m 18 again in that regard. The US title is a piece of hardware I’m very proud to hold, but my approach is that I have nothing to lose and I can put it all on the line every night. I don’t think anybody else here has that mentality.

–What drew you to Tanahashi? When did you start following him?

Moxley: The match that hooked me on him, and NJPW was probably him and Suzuki in 2012. I remember watching that match a hundred times. No rope work, just in the middle of the ring. Back when I was young, before New Japan World, I’d watch these crappy quality old VHS tapes. Super J-Cup, Muta and all that, but Suzuki and Tanahashi is what attracted me to modern New Japan. 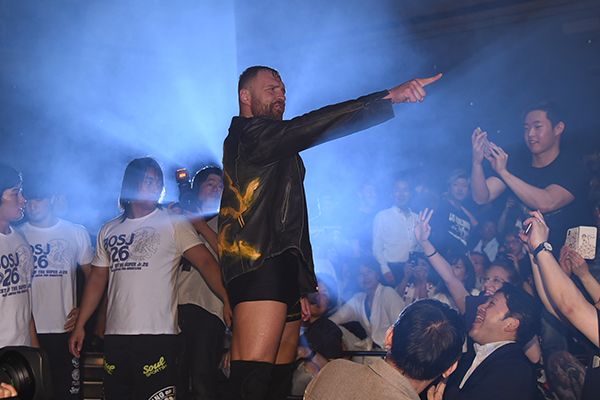 –A lot of former WWE wrestlers, like Jericho and Cody have gone on to wrestle in NJPW. Did that factor into your decision to come here? Did you follow them?

Moxley: I tried to follow along with them. When you travel in WWE, you’re kind of in a bubble and it’s difficult to follow along, but I did watch what I could. Then when I knew I was leaving, Japan in general was definitely on my bucket list. I wanted to have a good run in Japan, and of course NJPW was the goal. So when I got the call from them, I was just like ‘let’s go, put me on the airplane’.

–Some wrestlers have gone the other way from NJPW to WWE. Did you talk to any of them about New Japan?

Moxley: Well, Shinsuke Nakamura is in WWE and doing very well. I never got to wrestle him sadly, but he heard that I was likely going over to be in the G1 and he was very pleased, said it was a great life experience. Karl Anderson, who I’ve actually been friends with since I was 18, since we’re both from Cincinnati. I asked him about the G1, a few others as well, and everybody was great and said ‘yeah, go for it’.

–What are your thoughts on Nakamura, as somebody who was a top wrestler that made a big change, much like you have done?

Moxley: I think he’s doing great there. Fans love him. It’s a different style, but he fits in well because he is charismatic, he is flamboyant. He can go, so whether it’s a New Japan ring or a WWE one he can do well anywhere.

–What are your thoughts on the G1 Climax?

Moxley: I’ve watched a lot of matches from it. Lots of great matches, grueling fights. I’ve heard it’s the toughest, most grueling, most challenging tournament in all of sports. It’s a meat grinder, four weeks of hell. It’s got a hell of a reputation as being the toughest thing you can do as a professional wrestler. That’s intriguing to me as a fan, and it’s intriguing to me as a wrestler.

–You being in the G1 is going to create a huge amount of buzz. There are a lot of dream matches people will be expecting, but what can fans expect from you in the G1?

Moxley: Whenever I step in that ring, I’m going to work my ass off. The thing I definitely bring to the table is fight and maximum effort. Over the coming weeks and months I plan on learning new things, and hopefully putting them to use in the ring. The only thing I can promise is that I will put my life on the line and give maximum effort because I have such respect for these fans.