After becoming the first double IWGP Heavyweight and Intercontinental Champion at Wrestle Kingdom, and with a challenge from KENTA on February 9 official, Tetsuya Naito gave his thoughts to assembled media Tuesday in Tokyo. 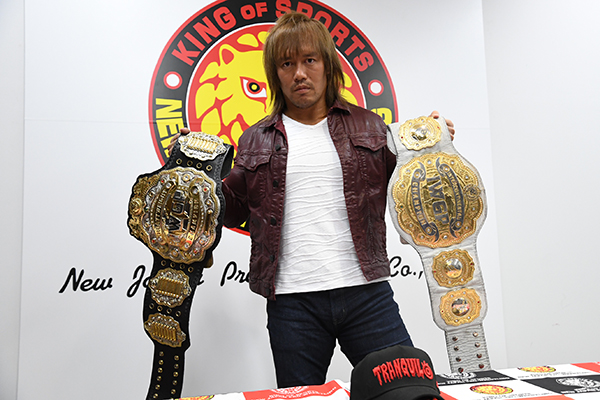 Watch New Beginning in Osaka February 9 on NJPW World LIVE and in English!

At the post Wrestle Kingdom 14 press conference in NJPW’s offices on Tuesday January 7, Tetsuya Naito gave a statement to assembled media about his win, and challenge from KENTA at New Beginning in Osaka. 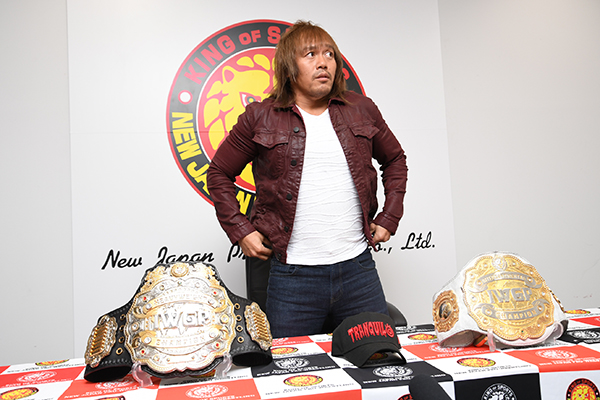 This is repeating what I said in the ring after my match January 5, but did all of you in the Tokyo Dome, all of you watching around the world get a good look at Tetsuya Naito’s resurgence? I never asked for all the turns and bumps in the road, but it all added up to that resurgence in the Dome. They were all destined, destino. And perhaps it was destino that I never got to do that big role call in the Tokyo Dome afterward.

Maybe this is hard to see on NJPW World, but there are a lot of media gathered here today. You should take the opportunity to ask some questions. No tranquilo here. I’m occupado, I might have to split at any moment. 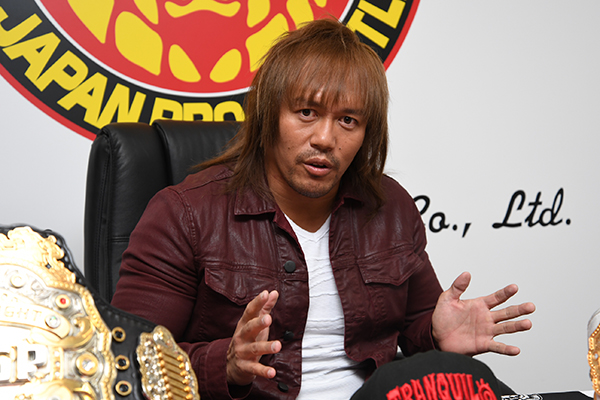 –Backstage after New Year Dash!! You said that you would ‘play’ with KENTA; that you were up for a fight, but that what happened to the championships was up to the NJPW office. How do you feel about this officially being a double title match?

Naito: I said backstage that I would fight KENTA. Whether that was going to be a title match was down to the office. I thought the office might take a while to think this over, that it might be a pretty tough decision for them, but they moved damn fast. Well done New Japan.

January 5, after the main event. That’s a special moment that only the person that won and the one they shared the ring with can be a part of, and he jumped in. Now from Tetsuya Naito, professional wrestler’s point of view, that’s cool. Took balls. I wonder who else was thinking they should make a move, but he took a huge risk and ran out there. That, I have to respect, as a fellow wrestler.

But it wasn’t just me that wanted to have a big cheer in the Tokyo Dome. There were fans in the building, or watching online all over that wanted that. Maybe the wrestler Tetsuya Naito can say ‘it’s OK, we’ll do it next year’. But what position will I be in next year? Those fans that made time to watch, or set aside a weekend on their schedule and brought a ticket, will they be back next year? We don’t know. So to those people, for it to end that way was a real shame, and it also makes me want to say to KENTA ‘don’t try me, punk.’

As far as this becoming a double title match is concerned, these are NJPW’s titles. It isn’t for me to say in the end, and if the company says that this is a title match, then it’s a title match. But is it really OK? I can understand if KENTA beat Goto in the Dome on Sunday, but he lost, and yet his challenge is accepted. That’s a slippery slope to anyone challenging and it could be a black mark on the company… Or this is all part of the plan and even though I’m double champion now, the office is still going to try and tick me off.

It’s decided, so we’ll do it. Both belts on the line, me and KENTA. But Jay White, Kota Ibushi and Kazuchika Okada, you all fought to be a part of this weekend but now you’ve fallen to second, third and fourth in line. Is that really alright? Whatever. I’ll fight him. He’s hungry, come to the ring, I have something great cooked up for you. Until then, where is he? Maybe he’ll jump me right here? Is he going to jump out of me? Look, wherever you are, if it’s in America or Japan I don’t care, get in your best shape and come into the next tour. You’ve wrestled around the world right? Take the benefit of all that experience and try me. 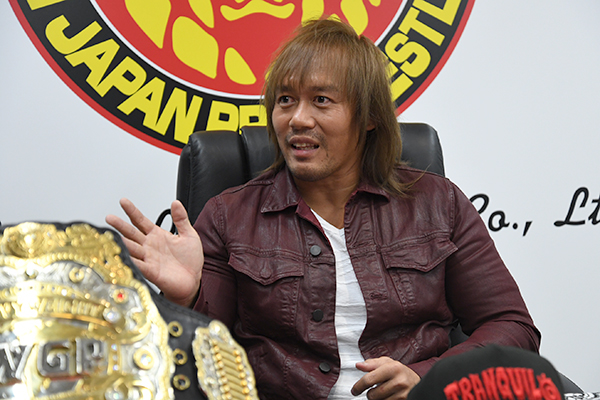 –As a double champion the risk is greater in a challenge, you have more to lose. Will you continue to defend both titles together?

Naito: Well, in this instance, I left it up to the office to decide. This is the decision. But before the Tokyo Dome I said that I wanted to carve a legend for myself, and to do it, and have others challenge me so easily for that cheapens things somewhat. I personally think that after this, I we don’t need to defend both titles together. Maybe my challenger can choose. If it’s some special opponent, well maybe that’s different. But otherwise, pick one you want to go for. Even if that meant wrestling two big singles matches in one tour, I don’t mind. I mean, I just did that in back to back nights, didn’t I? How about putting the Intercontinental title up at the start of a tour on night one, and then the Heavyweight at the end of the tour? That sounds good to me. Come on, I made history here, humour me at least. Anyway, as you know, my opinions tend not to get acted on. But that’s my idea, and we’ll see what the company does.

–So you think title matches should only be for one?

Naito: Hmm, but there were other people making history. Kota Ibushi, Jay White, Kazuchika Okada, if they wanted to come and challenge for both belts, I’d have no problem with that. But for wrestlers I have no respect for? That’s a different animal. Does it depend on the wrestler? Well… I’d say for the most part I don’t want to put both titles on the line at once. As a rule I want to defend them separately. 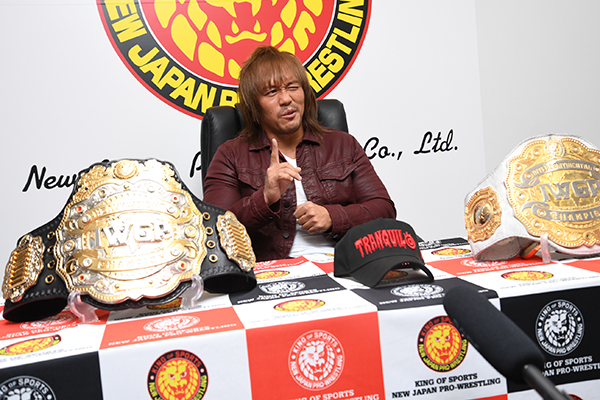 –Your views on KENTA as a wrestler?

Naito: Years ago I faced him in NOAH in a tag match, but yesterday was only the second time. I think yesterday my opinion of him changed. He’s smaller physically but he’s powerful, and his kicks hurt. Maybe a lot had wondered whether he could cut it in the heavyweight ranks in NJPW, but not anymore. Still though, I’ve only faced him twice, and the first time was so long ago.

We’ve barely touched really, but my thoughts up to now are he’s good at social media, he went abroad and couldn’t achieved his goals, he was a top wrestler in NOAH at one point and that’s it. I’m not putting him down. Like I said, he had a lot of balls to do what he did in the Tokyo Dome alone, but as for actually being in the ring, I don’t know. I’d like to find out, see what the benefit of all that experience is.

–Now that you have both titles, your thoughts and feelings? You have always wanted the Heavyweight Championship, but have seemed indifferent to the Intercontinental.

Naito: I still think that the pinnacle of professional wrestling is the IWGP Heavyweight Championship. They’re both lined up in front of us, but everyone’s eyes are drawn to the Heavyweight one. But as for the Intercontinental, whether it’s necessary or not I guess I am tied to it in a way. What shall I do? Hey, you’re from Tokyo Sports aren’t you? I’m getting pretty hungry. Maybe you and i can talk about it over dinner. A family restaurant maybe. Until then, tranquilo, assen na yo.