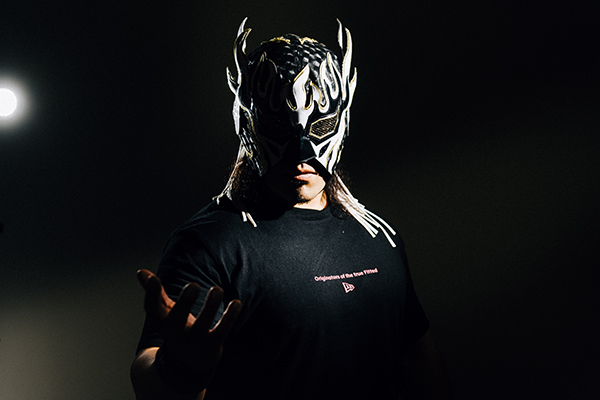 El Desperado continues his in depth discussion, as he refuses to hold back on anyone in the junior heavyweight division! 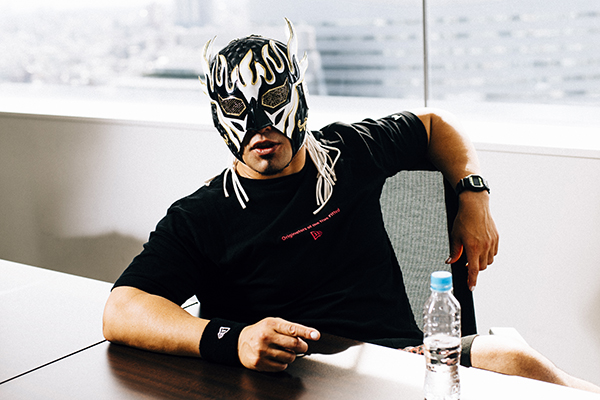 Desperado: It amazes me that guys like Roppongi 3K can have such amazing physiques, such great moves, and still look like geeks.

–You’ve always been very critical of Roppongi 3K. You said once ‘it amazes me they’ve been able to achieve so much for guys that don’t look tough at all’.

Desperado: I haven’t changed my mind on that by the way. It’s amazing just how uninterested they appear, and just watching them seems off. Rhythm, tempo, whatever. Maybe it might look the same to some of the people reading this, but to me, they’re all way off.

–They’ve been firm friends since their Young Lion days…

Desperado: That doesn’t mean s**t. Their balance as a team is way off. You can be the best friends in the world, and you can still be a s**tty tag team.

Desperado: Like, me and ‘Nobu, when we aren’t on the road we don’t talk, don’t text, nothing. That’s not to say that we don’t get along.

–They actually started a band together, The Sakura Denbu.

Desperado: Haha! No sense of rhythm at all, and they’re in a band? Well, they can do what they want in their spare time. Maybe some the old farts might say they should be focused on wrestling, but in the end, they do have the belts; it’s not my position to criticise that.

Our view on wrestling is completely different. 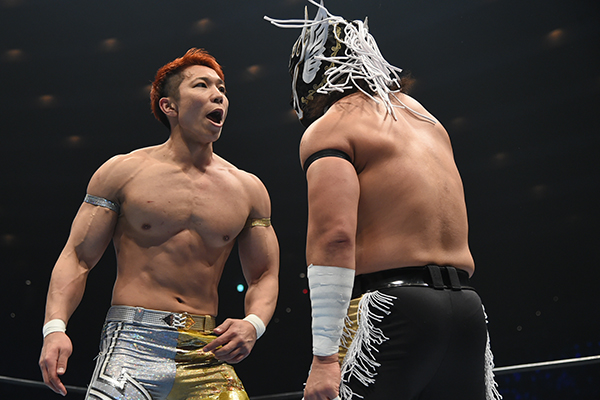 –You’ve made your thoughts very clear on Roppongi 3K as a team. How about SHO and YOH as individual wrestlers?

Desperado: Hmm. When I’m in with SHO, I’m able to at least think ‘OK, how can I make this interesting?’ With YOH it’s just ‘what can I do with this?’

–Heading into your February 9 IWGP Junior Heavyweight Tag Team Championship challenge you were really calling out YOH. You said’Do you even feel anything at all?’, you called him a ‘piece of s**t’…

Desperado: I’ve got not time for anyone that doesn’t have any feeling, any emotion. I don’t want to be in the same ring. Look at Hiromu, look at (Ryu) Lee, they wear their hearts on their sleeves. SHO does a better job of showing emotion.

Desperado: With SHO I kind of feel, if I make this guy mad, this might be pretty god. For YOH, he just thinks he might be cool if he can hide his dorkiness. He’s completely hung up on that. If we can get past that…

–YOH has set himself apart somewhat since he was a Young Lion. Recently, he’s been exploring other forms of expression as well, like his band, and his art.

Desperado: If you just look at him you can see that he clearly takes working out seriously, he’s got a great look. He can do whatever side projects he wants, but he and I have completely opposite viewpoints when it comes to wrestling.

–you don’t gel well with him at all.

Desperado: Well, in the end though, the two of them are where they are. Nobody’s in a position to criticize, I guess.

–You’re critical of them as a tag team, but they have an expert tag wrestler as their coach in Rocky Romero.

Desperado: That’s a problem, right? They have such an excellent example of a tag team wrestler right next to them, and they son’t take his advice, or he’s not giving it, I don’t know. maybe if they are taking that advice, they’re not putting it into practice. Maybe if they each continue as tag wrestlers they should do it with different partners. 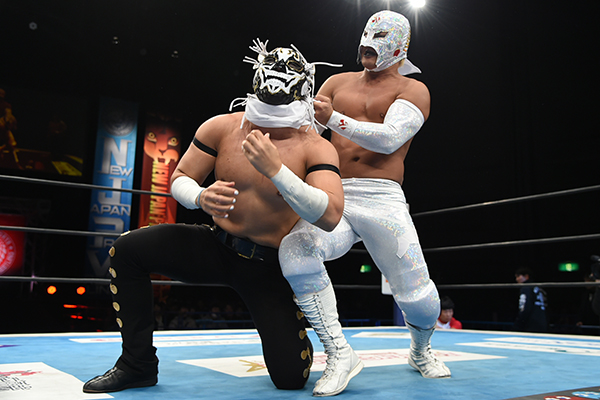 –It seems your main masked competition is BUSHI.

Desperado: I think we both wear masks for the same reason. If you pick up a fighting video game, there’s usually a pro-wrestling character in there, right? And they’re always one of two types; either the gigantic powerhouse, or the speedy masked guy. Me and him both, we want to join that iconic standard.

–And it’s only you two and Tiger Mask under masks in NJPW right now.

Desperado: For better and for worse, Tiger Mask is a different case. He’s inherited that mask from three other guys, and that carries a certain level of expectation both good and bad. Me and BUSHI, there’s a sense of who of the two of us will represent masked wrestlers in NJPW. There’s a clash of ideologies there. That’s just something that came to mind right now.

Desperado: If you hadn’t called us out as the two masked men, I wouldn’t have thought of it, I guess. We’ve both wrestled each other over those junior tag belts. There’s something about YOH and BUSHI both, I think.

–He doesn’t really show his emotions either?

Desperado: When he’s on, he’s on. But there are other times when I feel I’m hitting him and he’s not showing anything in response. He’s one of those guys that’s impossible to bully, it’s annoying. I’d be interested in wrestling that masked freak of nature, Bandido.

–Bandido really made his presence felt during Best of the Super Juniors last year. A lot of wrestlers all over the world use BoSJ as a launching pad.

Desperado: That’s the brand power that BoSJ has built. You really hone in on those names.

–What do you think of Ryusuke Taguchi? He’s often in that mix.

Desperado: Well, his back and forth with RPG 3K was fun to watch. I don’t mean fun in a ha ha sense, but in terms of just how smooth he is, and how well he can do each little thing in the ring. He’s hard to predict and know where he’s coming from, and he has a lot of different ways he can finish you. Plus for a guy that’s pretty big, he can do a no touch tope con giro with zero effort; and with his larger size, it hurts like hell.

Desperado: He isn’t exactly a gym rat, but he’s a skillful rat bastard. A gifted pervert, you could say.

–Your thoughts on the BULLET CLUB juniors?

Desperado: Phantasmo is a difficult guy to read in the ring. I lost to him once in the UK, so I don’t want to sound too full of myself when I say this, but it’s really hard to say just how good he is.

Desperado: Ishimori, he’s an easier guy to figure out. Fast, powerful, but a glass jaw. A few good shots and he’ll break.

–And what about the two of them as a tag team?

Desperado: Ishimori has that sudden acceleration, Phantasmo has those spectacular moves he can pull from nowhere. They have a much better balance as a team than RPG3K.

I want the Junior Heavyweight Championship, sure. But the thing I want most is to win the NEVER title as a junior. 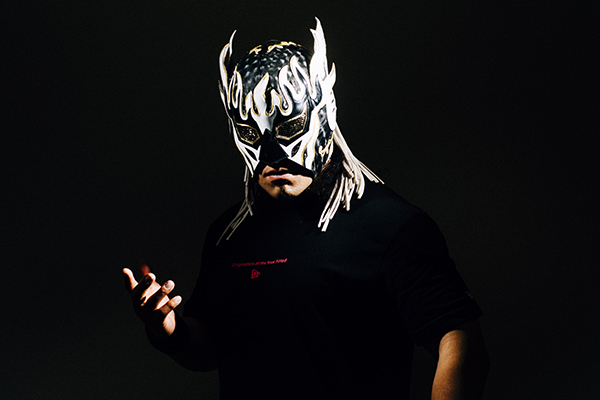 –One thing that’s clear talking here is how, even though there’ve been changes in the junior division, there’s still a wide range of different personalities.

Desperado: I think one thing I like about BoSJ as well is when you see new names in that lineup. Like Bandido; I’d heard his name, but that tour let me know that he’s for real. That tournament has really become a platform to find the world’s best.

–It was a very international field to last year’s tournament, so it really does have a worldwide feel.

Desperado: I’m not comparing it to the G1 or anything, but there’s much more of a ‘jack in the box’ element to the BoSJ. Mind you, I hate all the comparisons between junior and heavyweight.

–It doesn’t interest you.

Desperado: When I think of junior versus heavyweight, it all goes back to Liger and (Shinya) Hashimoto, right? That was the start and end of it to me.

—February 24 1994. That was the start of the semi-regular tradition of junior heavyweights versus heavyweights at the annual Anniversary events.

Desperado: In my mind none of those can top Hashimoto vs Liger. The original and the best to me.

Desperado: I don’t understand that. It doesn’t make sense; they’re separate divisions for a reason, right? But openweight is a different story. 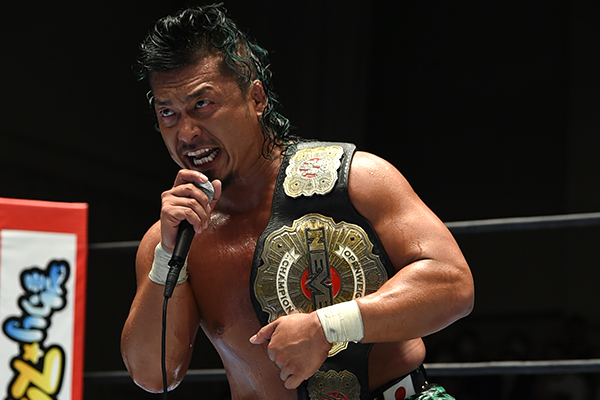 Desperado: That title is there to be the openweight title, right? Who says it has to be about two lunkheads smashing skulls?

Desperado: Heheh. But I put it out there on Twitter when Taichi won the belt a while back. I have no interest in going heavyweight, I want to win that title as a junior.

–The current NEVER Champion was still a junior heavyweight until after the G1.

Desperado: When Takagi won the title, he went straight to SHO at ringside, didn’t he? That made me think ‘oh, there’s a possibility here’.

–You want a shot.

Desperado: Nobody, even Ospreay has held that belt while still really carrying themselves as a  junior heavyweight, right? If that’s the case there really isn’t any point in it being openweight. So yeah, when Takagi took that belt, I got pretty damn interested in it.

Neither me nor Hiromu in the Best of the Super Juniors? That meant something in the end. 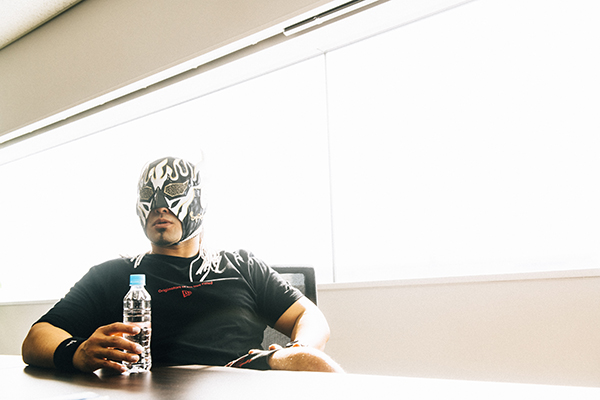 –You haven’t been in a singles championship situation since your return in October, but there are a lot of different situations one could envisage. Especially with Hiromu holding the Junior Heavyweight Championship.

Desperado: It’s all pretty interesting, huh? I remember when he got hurt, in 2018. I got a message from my ‘big sister’ (Mima Shimoda) saying he’d hurt his neck.

–You weren’t in America for that event.

Desperado: I watched the match back on NJPW World and just let out this gasp when I saw it. For him to then finish the match and win with the Time Bomb… I saw something where he was talking about how he thought this was his lats match so he forced himself through to then end.

Desperado: It was amazing that he finished that match, but I wanted to say to him that he can’t decide he’s retiring that easily!

–You’ve already made your feelings clear on Hiromu.

Desperado: This is hindsight speaking, and just so I’m clear, nobody should get hurt like that, but he came out the other end stronger.

–If you were to become IWGP Junior Heavyweight Champion, is it fair to say you’d want to win it from Hiromu?

Desperado: Yeah. I’d want to beat Hiromu and have my first defence be against Ryu Lee. I remember, when Lee defended the title the first time (May 3 2019 over Taiji Ishimori) he said that he wanted to face me. I haven’t forgotten.

–It really feels like you’re becoming a key player in the junior heavyweight division from here on.

Desperado: Key player? I think one thing I want remembered is I’ve always had the black hat. I’ve always felt that what people like is what I hate. Not a single atom of my being wants to be regarded as the face of this division.

–Not even a little?

–You seem to hold Hiromu in higher regard than anyone.

Desperado: All I’m saying is hings gain meaning with time and distance. If you look back to me and Hiromu not being in BoSJ last year, in the end it might all have been because of this. It’s all fate setting up the table for something big to happen. 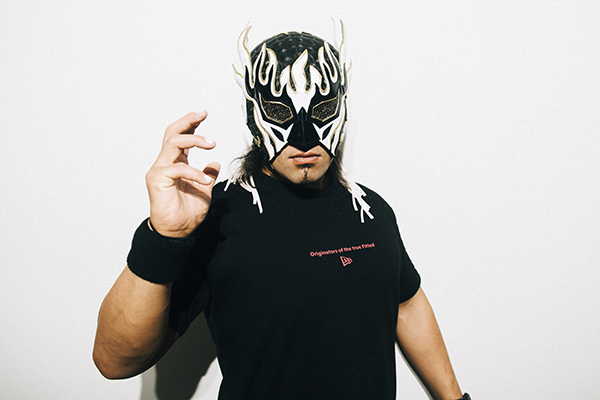