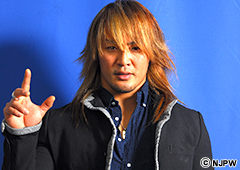 –So last time we talked about the start of 2003 for you, but I want to take us back just a little bit to the summer of 2002. You, Kensuke Sasaki, Kenzo Suzuki and Blue Wolf formed a team known as Swing-Lows.

–You don’t have a history of being in factions, but you did say that Swing-Lows has an interesting history to it.

Tanahashi: Well, Sasaki headed the whole thing up. I got on well with Kenzo and Blue Wolf, but it was kind of a surprise that he would choose us.

Tanahashi: Well, and I’ll be honest here, there were rumours that he was planning his exit, and he wanted to surround himself with people he might be able to take with him when he left.

–He did indeed leave in October 2002 to the WJ promotion. So you think he made the group in the hopes of recruiting you guys?

Tanahashi: I think that’s exactly it. So in the end, he left not four months after we all got together, and it wasn’t something I really had my heart set on, so we didn’t continue (laughs).

–The summer of 2002 saw your first G1 Climax. You learned a lot from Tatsumi Fujinami in the lead up to that G1.

Tanahashi: Right. That was a real honour. I always have undying respect for Fujinami.

–What do you like most about him, as a wrestler?

Tanahashi: There was just such perfect form to everything he did. You see something as simple as a lock-up. Nobody, in my mind, even today can lock up with someone like Choshu and Fujinami would.

–They had you with a lock-up.

Tanahashi: Fujinami was painting pictures, with a lock-up or with a headlock, just in every little thing. Something like his rope work isn’t the same as an Okada or a Naito today, but his artistry… And to maintain the lighter physique he had while battling it out with the heavyweights of the day is something I always aspired to.

–You have an interesting way of dropkicking opponents; is that a Fujinami influence?

Tanahashi: Ah, now that you mention it… I think there are a lot of things I took from him, whether consciously or not.

–What are your thoughts on him as an individual?

Tanahashi: He’d take me out to dinner quite a bit. He was very nice; perhaps too nice. I think that when he was the president of NJPW, that niceness led him to be labelled as indecisive, but then with the state of the company when he was in charge, he was in a lot of no-win situations.

–There was a lot of disorder at the time. I often get the impression that Fujinami was wielded as a puppet for the owner Inoki.

Tanahashi: Was he a bit of a doormat? Perhaps. Thing is, Fujinami had too much fondness for Inoki. But as much as he tried to get his praise, Inoki would never have a kind word for him. It was like unrequited love… (laughs)

–To get back to your debut G1 in 2002, you beat a lot of your senpai to the punch in making your first G1, less than three years into your career. Was there a lot of jealousy toward you?

Tanahashi: I dare say that there was, but I didn’t really pay any attention to it.

–That’s a skill in and of itself; there are a lot of people who would be worried about that kind of thing affecting their relationships with co-workers.

Tanahashi: I think I always had that mindset though. Maybe I was oblivious, heh. When I was a kid I never go into fights; I was just completely given over to the idea that there wasn’t a person on Earth who didn’t like me. Then when I was getting booed like I did, I realised ‘oh, wow, there are people who really don’t like me’ (laughs).

–During that G1, you got wins over Sasaki and Shiro Koshinaka, and lost to Hiroyoshi Tenzan, Yutaka Yoshie and eventual finalist Yoshihiro Takayama, to go 2-4. Those wins were pretty important to you.

Tanahashi: Right. That tour really lit a fire in me. Koshinaka and Sasaki were in my first two matches, and I got those two upset wins. The second match was in Osaka, and got a huge reaction. That reaction is really important to a wrestler.

–Did you really feel how different G1 is, compared to the normal tours?

Tanahashi: Oh yeah. You hear the G1 theme and you get those shivers down your spine. It’s tough, but then as now, I was never tired.

–There it is! Never tired!

Tanahashi: Well, I was younger then, which helped (laughs). One thing that sticks with me was… Hiroshima I think? When I wrestled Yoshie, one guy in the crowd yelled ‘Tanahashi! I came to see you!’ And that made me feel so happy.

–You were getting more and more popular with the female fans, but the guys were paying to see you too.

Tanahashi: Right, the guys hadn’t turned on me yet. (laughs)