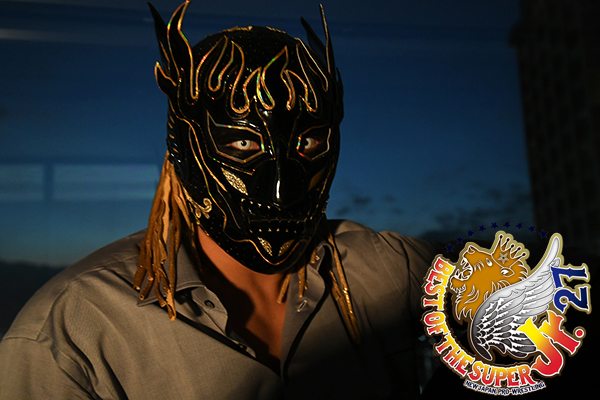 With a vicious attack to Hiromu Takahashi most recent in the memory, win, lose or draw, El Desperado’s Best of the Super Jr. campaign is guaranteed to have been an impactful one. Before the tournament kicked off, we sat down with the IWGP Jr. Heavyweight Tag Team Champion to get his thoughts.

Watch best of the Super Jr. 27 LIVE and in English on demand with NJPW World! LIVE English commentary December 6 & 11!

I don’t want to get into that ‘who’s better’ thing. But this is a hell of a chance 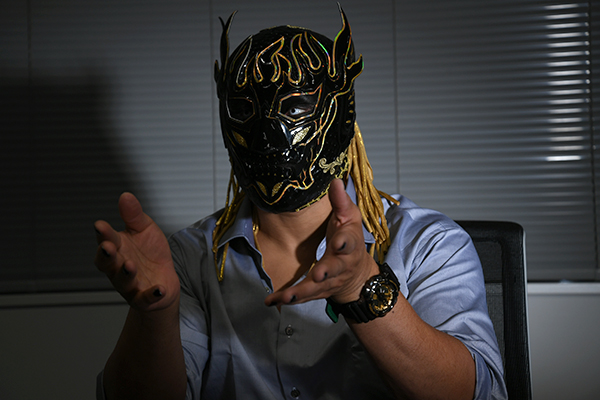 –So first of all, how did you feel when Best of the Super Jr. was finally announced after its cancellation back in May?

Desperado: I think the junior division as a whole was in a dark space until the junior heavyweight tag team championships were decided. To have that match, and now to be able to bring the juniors into focus again, I’m definitely grateful.

–You missed last year with your broken jaw, of course.

Desperado: Eh, all water under the bridge. I’m the kind of guy to laugh at anything after a couple of days. So I’m not going to sit here and do the whole promo of ‘letting all that frustration out’.

–And this time Best of the Super Jr. is competing with World Tag League.

Desperado: Hmm. Well, gotta say, I’m paying attention to World Tag League for the first time in a long time. Singles versus tags is part of it, but there’s the whole juniors versus heavyweights situation to think about.

–Does that mean you’re going to be very focused on your match quality?

Desperado: Hmm. I’ll be honest, even speaking as a junior heavyweight here, there’s no way BoSJ isn’t the better series. When it comes to the cards on each side… I’m not big into the whole ‘who’s above who’ thing. But this is a hell of a chance.

–So the competition is a big motivator for you.

Desperado: Right, and I think that’s something pretty cool the company did, to shake things up and put the two tours against one another.

–How are you feeling, physically, going into the tour?

Desperado: Hmm, not any better or worse than normal. Same as always, heh.

Taguchi? If you just think he’s a perv, You don’t know wrestling 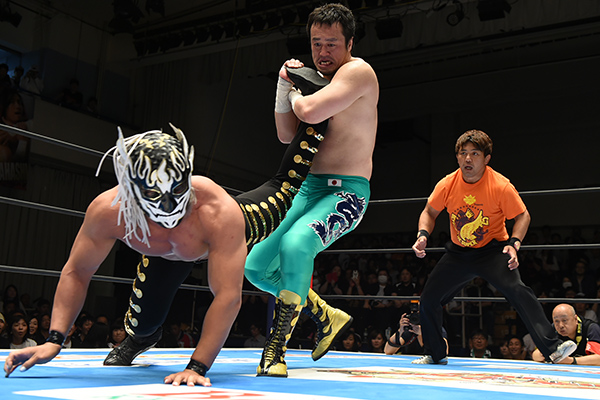 –You started your campaign in Aichi on November 15 against Ryusuke Taguchi (watch on NJPW World!). What are your thoughts on him?

Desperado: He’s amazing. Really. If you just think he’s a perv, then you don’t know wrestling. The thing is, if you don’t have your fundamentals 100% down pat, you can’t afford to play around the way he does and still be successful. Taguchi’s an important match wherever it is on the schedule.

For Hiromu, the cheers are like gasoline to him, they make him run 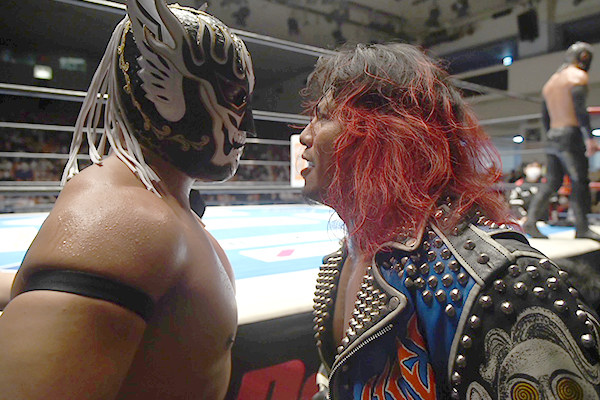 –Your second match in the series was the main event in Korakuen Hall, against Hiromu Takahashi (watch on NJPW World!)

Desperado: Next to Taguchi he’s a guy that has an even stronger sense of character. Just a win and he’ll eat that and move on. But then again, I’m not a fan of the flashy stuff, so I’ll stick to my fundamentals, heheh. But I think the crowds we have now are an advantage to me.

–You think the crowds not being able to raise their voice helps you?

Desperado: For him, the cheers are like gasoline, they make him run. I don’t think he’s completely vulnerable without them, but he’s missing a certain layer. When the shackles are off, he’ll leap forward another two or three levels. Then again, he’s the type that can make people raise their voices in spite of themselves, that’s his power.

What mark can Yuya Uemura leave? That’s the question 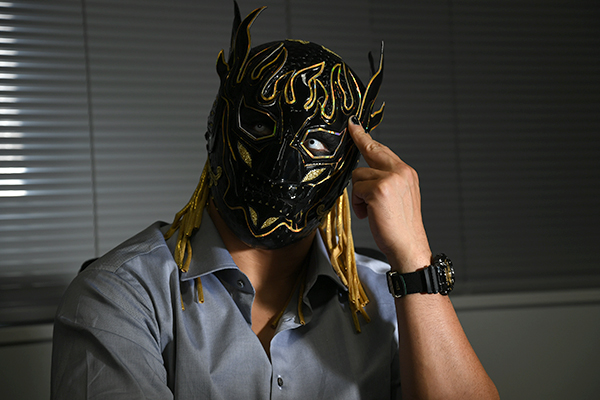 –On November 20 in Korakuen, you faced Yuya Uemura. That match coming as a result of Uemura substituting in for Yoshinobu Kanemaru.

Desperado: Obviously I went through the same thing last year. It’s a shame obviously, since me and him would have been a big deal, and I hope ‘Nobu’s OK, but I’m fairly matter of fact about it all. After all I went through, having to sit out last year and getting my face fixed, it’s OK, y’know? If you can get it fixed, it’s just a flesh wound at the end of the day.

Desperado: It must suck for him to not wrestle right now. For me to make a big stink about it doesn’t change anything; if it’s a case of missing one tour versus making your career five years shorter, then he should take a damn break.

–What do you think of Uemura?

Desperado: Is that kid really a junior? He’s huge, isn’t he? But DOUKI stood in for me last year and he went on to have a NEVER 6-Man title match a year later. So fate works in funny ways. Not saying anyone should be happy ‘Nobu’s out mind.

–Uemura was pushing to be allowed in the field for a while, but wasn’t in the original lineup.

Desperado: I think he can owe his spot now to him making all that noise. If he hadn’t pushed to be in the tournament, then they might have put someone else in instead of ‘Nobu. But I will say, all the wrestlers in BoSJ are being tested quite a lot, y’know.

Desperado: There’s only ten of us. You have the competition with World Tag League and Super J-Cup. Everyone here is being compared to a lot of different factors, but if we were doing the tournament as normal in May or June, they’d just be focused on what we were doing.

Desperado: So all that makes a tough hurdle for Uemura. The question will be in all of this how what mark can Uemura leave?

–What do you think of him as a wrestler?

Desperado: Well, I know his potential, I know how capable he is. I saw his match with ‘Nobu in the New Japan Cup. But… Don’t take this the wrong way, but Young Lions have the crowd on their side by default, pretty much, right? If you show feeling and put yourself out there, the fans tend to get behind you no matter what. So I’m not going to sing the praises of him from an ability standpoint. For him, it’s all about bringing that spirit and fire, and making people think ‘maybe there’s a chance…’ That will be fun.

–So it’s about spirit more than ability for him.

Desperado: Right. You can’t compare him to guys that have been on excursion already. Those two or three years make all the difference. Like, Great-O-Khan is completely different now. Wato is… Wato.

–It seems like you have some opinions about Master Wato.

Desperado: I’m not running him down, but when you come back from excursion, you expect to be viewing these guys as adults right? If he can’t bring something to the table, we need to get a refund from OKUMURA (laughs). He’s supposed to have trained in Mexico, but I don’t see Mexico in him.

Me and Half Ass Wato? In the main event? I’m being tested here.

–So, harsh words for Wato, but you’re wrestling him in the main event on November 24.

Desperado: That’s a main event? Jeez. To put it politely, that’s the company testing me. To put it bluntly, he shouldn’t be shoved in the main event like that.

–You think you’re being tested to bring Wato to a main event level?

Desperado: yeah. Except I hate that brat. I might just punch him in the face in 38 seconds, knock him out and take the DQ loss.

–What irritates you about him?

Desperado: It’s a case of a little knowledge, and no application. He’s done a bit of kickboxing so he tries to do kicks. He’s rolled about a bit so he tries to grapple. There’s no logic behind anything that he does other than ‘I can kinda sorta do it, so I’ll do it in the ring’.

–He’s doing things in the ring that he isn’t ready for.

Desperado: Right, and that shows. I hate that. He’s half-assed, I have no time for it.

SHO? There’s a lot of wasted motion with SHO 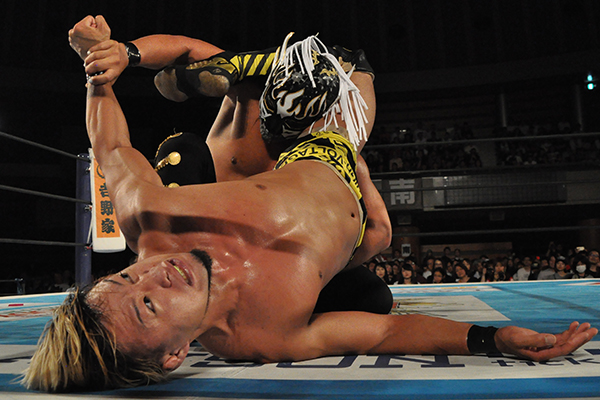 Desperado: That’s going to be a lot of calories burned. To be honest about Tanaka (SHO), he’s inefficient.

Desperado: So when I talk about him being inefficient, it’s all a lot of wasted motion. He hasn’t worked on how to move around effectively, he looks awkward. Now you look at a power guy like Manabu Nakanishi, and SHO’s maybe that type. But Nakanishi was able to move with a lot more grace, so when he used that power, it stood out. SHO doubles down on the power stuff and does all he can to wield that, and it doesn’t work. In a different way to Wato, Tanaka’s half-assed as well. 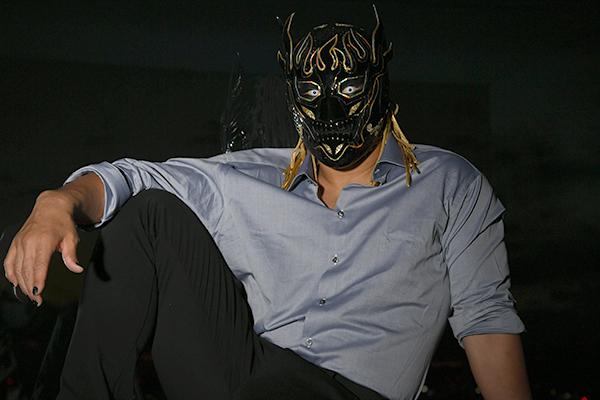 More from Desperado in part two!