Ibushi meets the press for the first time since Wrestle Kingdom 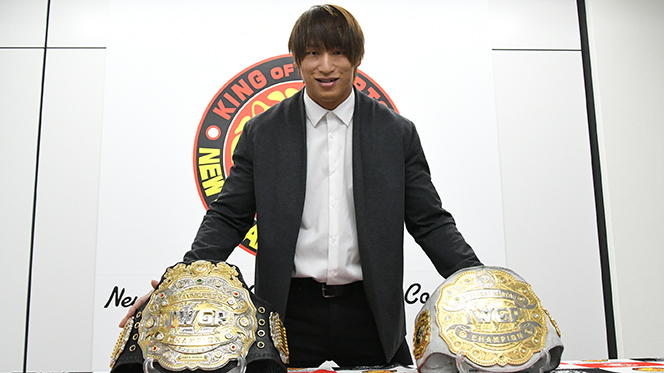 The New Beginning press conference on January 12 saw Kota Ibushi make his first public comments since his IWGP heavyweight and Intercontinental Championship win on January 4, and subsequent defence on January 5.

‘I am the new IWGP Heavyweight and Intercontinental Champion. Looking back on January 4 & 5, I have nothing but gratitude for all the fans that watched us on NJPW World or who came to the venue. I believe it was only myself and Hiromu in the junior heavyweights who wrestled both nights.

I wrestled for about 80 minutes all told, but since then I haven’t really done anything. I have a little bit of trouble with my foot, but apart from that I’ve finally been able to take a break.

After the match on the fifth, SANADA came out to challenge me, and I’m more than happy to accept that ‘gift’. That match is official, now, right? I’m looking forward to it. He has all the tools, and I can’t wait to face him.

I do have one thing I want to say. I said this after the match on the fifth, but I want to put it out there again. I want to take these two belts and unify them. This isn’t something I take lightly. I have a big connection with this Intercontinental belt. And the Heavyweight Championship is the top prize in NJPW. But that said, I still want to make these two things into one.

Last year, these belts were defended together, right? One belt didn’t change hands without the other. So if we take these two and make them one belt, that makes you the strongest and the best, all in one. Maybe not everyone can see it right now, but there’s no doubt in my mind, it’d make for something awesome. I have a big plan for this. So I’ll say it again, on the record. I want these two belts to be one.’ 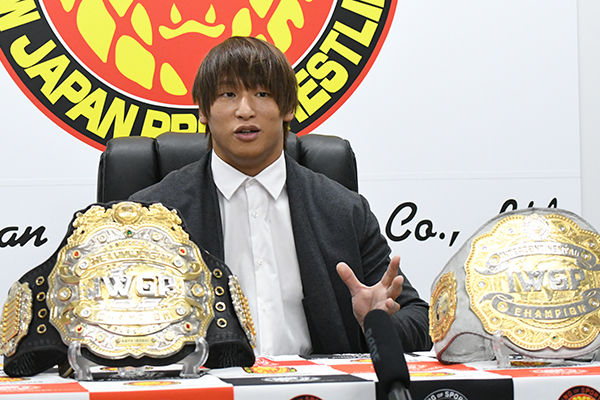 –So you’re saying there would be one physical title belt?

Ibushi: If possible, I think that would be the best way. In the end, nobody challenged for just one title and not the other. I’m saying this even understanding the importance and the significance here. Maybe some people won’t be happy about it, but in the end, nobody went for just one title. Splitting the two back up would be confusing, so I think it’s really better to just have one. Maybe it might be different, a new design, perhaps, but that’s what I want to do here.

–Would that be something that might happen after your defence (against SANADA on February 11)?

Ibushi: Well, I’d ideally like it to happen as soon as possible. To all intents and purposes, these are one championship, correct? And it’s the same deal in this match against SANADA, so. I love them both with all my heart, but…

–Do you have any other thoughts on SANADA?

Ibushi: I’ve wrestled him a lot. I don’t have much I can say, he doesn’t have any flaws, there’s no gaps in his game, he’s perfect. But maybe his weakness is he has no weakness.

Ibushi: I can only say how happy I am. It’s really a dream come true. It’s really been, since my debut, just… (long pause) It’s been a hard road.