–Last time we talked about the first New Japan Cup in spring 2005. After that tournament, you and Shinsuke Nakamura defended the IWGP Tag Team Championships in the Tokyo Dome against Manabu Nakanishi and Kendo Kashin, Team Japan.

Tanahashi: The one thing I remember about that match is that Nakanishi and Kashin didn’t seem like great communicators (laughs). I remember figuring that Kashin and Nakamura were similar stylistically, so I would be in charge of Nakanishi.

–Did you have much interaction with Kashin?

Tanahashi: He left New Japan at the same time as Keiji Muto and Satoshi Kojima, but when I was a Young Lion we sparred a lot. He beat the hell out of me, him and Michiyoshi Ohara.

–Both had that MMA background.

Tanahashi: Nakamura too, of course. From where I was in the corner, their mat work was really impressive. Apart from that though, there isn’t much from that night that stays with me, especially considering it was a Dome card. Back then even these big match cards were booked out of the blue. The matches were suddenly made and off we went; there wasn’t much progression, or a story flowing between the matches like there is today. 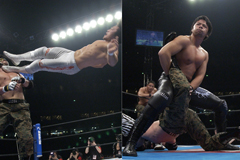 –That Tokyo Dome card had a Keiji Muto vs Ron Waterman match, completely at random with zero build.

Tanahashi: The thinking was just to get names and figure out how to use them afterward. But to be honest, that match was way better than it had any right to be. Shows what a pro Muto is. Oh! And the other thing from that card was me and Nakamura driving into the venue together!

–You’d said at the time that you and he had quite a stiff relationship, that you didn’t talk all that much.

Tanahashi: Well, I wanted to get to know him better. I had this Audi TT at the time, a two seater, and I think Nakamura was the only wrestler who ever rode with me. I guess I was expecting this magical bonding on the road thing, and… it didn’t happen (laughs). A little bit after that, Nakamura went and bought a Porsche. I was like ‘OK, now he’s one upping me with his cars as well’.

–First the IWGP title, then the Porsche (laughs). Right after this Tokyo Dome card, Antonio Inoki’s son-in-law Simon Kelly Inoki became the president of NJPW. What did you think of him?

Tanahashi: I didn’t really have much of an opinion of him one way or the other; I just kind of felt as long as he takes things in the right direction, that’s fine by me. With Simon though, I think it was less of a case of Simon and more the case of someone behind him pulling the strings.

–Simon was working in the original LA Dojo before he became president, so perhaps Nakamura knew him better?

Tanahashi: I really didn’t speak to him, myself. I just thought ‘oh, big dude with a beard’ (laughs).

–Were you keeping your distance from the office at this point?

Tanahashi: Yeah, pretty much. I didn’t have any interest in the office politics, you know? It wasn’t like what I would say would have any influence anyway, and I think that as we all faced a tough period, first and foremost I had to do what I could in the ring. Just take every match as it came and do my best.

–To go back to the LA Dojo, there were Dojo match events at the time. You went and wrestled some of them.

Tanahashi: I did the first one (June 21 2003). I never got an excursion, so that was actually the first time I’d wrestled outside Japan. I wrestled this guy Jimmy Ambriz. It was definitely a different kind of match.

–The bulk of Ambriz’ career was in MMA, so that would have influenced that match. What did you think of the original LA Dojo?

Tanahashi: Well, it was basically this big warehouse in the Santa Monica suburbs. I remember next door was a warehouse for this snack company. I would walk by and see huge palettes full of protein bars. Every day I used to think ‘would they miss one case?’ but I didn’t follow through (laughs).

–Lots of famous people went through the original LA Dojo.

Tanahashi: When I was there, Rocky (Romero) was around, and his partner Ricky Reyes. Bryan Danielson as well, I think? Prince Devitt and Karl Anderson came in just afterward, so I didn’t meet them. The big shock of that trip was that they flew me in business class. I thought that was wild, for a young guy like me at the time. 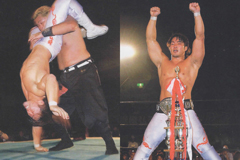 –After the May Tokyo Dome card, NJPW went on tour to Italy, with three cards between June 2 and 4.

Tanahashi: That… wasn’t business class (laughs). It was my first time to Europe; I remember there was a TV Asahi crew with me and Nakamura filming a feature.

–They did a segment where they showed photos of you to Italian women asking what they thought of you (laughs).

Tanahashi: They did! And let me tell you- Hiroshi Tanahashi was over with the Italian ladies (laughs). I actually made a credit card specifically for that trip. I went and bought a nice suit, hit the limit and my wife cancelled the card, all in the same week (laughs).

–What do you remember of the matches?

Tanahashi: What took me aback was the ring. It wasn’t our ring, but a local promotions’. It was pretty much just a sheet over iron plates. No spring to it. I figured any big bump and I’m done for.

–It was a unique environment. There was dancing and singing on the shows, a real variety…

Tanahashi: Ah, now that you mention it, it’s coming back to me! I have a lot more memories of the trip rather than the matches. I remember going into this local restaurant and having all this pasta and pizza; it was unbelievable. The real thing, and not exported stuff, it’s something else. I think I was more in holiday mode than working mode (laughs).

–This tour had you and Toru Yano facing off in the U-30 league. Nakamura had beaten you for the U-30 title at the Tokyo Dome on January 4, but wanted to retire the belt. Then in June they revived the title again.

Tanahashi: That was more about what the company wanted than what I wanted. They rushed into bringing the title back. It was tough. I really felt I had to do my best to get as much interest behind it as possible, and if I lost in that league, it would have meant so much lost progress.

–And it was in the middle of Best of the Super Jr. as well, making it extra hard to get people invested. The league had yourself, Yano, Blue Wolf, Harry Smith, who fans know as Davey Boy Smith Jr. now, Naofumi Yamamoto (Yoshitatsu) and Hiroshi Nagao. You won every match and beat the second place Yano for the title.

Tanahashi: I lost the belt to Nakamura and then won it back in a league he wasn’t in. I don’t think that was any kind of great achievement. But I do remember the match I had with Davey Boy. He was only 19 at the time, and I really saw a lot of potential in him. All the genes were there.

–It felt like you were leading this new generation.

Tanahashi: Blue Wolf was a strong guy, a good wrestler. He kind of came along at the wrong time, if he was a little earlier or later, he would have gone far, I think. Yoshitatsu… in the best possible way, he was the same guy then as he is now. He just had so much confidence in himself, whether that was warranted or not (laughs). Just no insecurities whatsoever. He could be in a locker room with guys that were bigger than him, or better than him, but he wouldn’t feel an shred of jealousy; he’d walk around like a big shot whatever room he was in (laughs).

–I heard a story that he was watching the parliamentary hearings on TV in the Dojo once. He told all the Young Lions that he planned to run for Prime Minister someday.

Tanahashi: Haha! With us wrestlers, if you find yourself doing the same move as another guy in the promotion, and they do it better than you, you stop using that move. It’s an unspoken rule, it’s just natural. There’s no point in you doing the same thing somebody else does way better, right? Yoshitatsu didn’t have that kind of sense, he couldn’t read the room at all. Whether or not there were guys who were way better at kicks than he was, he’d keep using them. People would try and give him advice, and it was in one ear and out the other. He’s another Gifu boy, so we got along well privately, if not professionally (laughs).