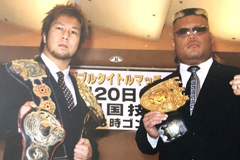 –So last time we talked about your first singles match with Keiji Muto, which happened on February 16 2005 at an All Japan Pro-Wrestling event. Interestingly enough, the main event that night saw Satoshi Kojima, who was an AJPW contracted wrestler at the time, defeating Toshiaki Kawada to become Triple Crown Champion. That led to a legendary Ryogoku main event on February 20. It was Triple Crown Champion Kojima vs IWGP Heavyweight Champion Hiroyoshi Tenzan in a double title match. The match went right down to the wire, and just before the 60 minute time limit elapsed, Kojima defeated a KO’d Tenzan to hold both titles simultaneously. You were part of the NJPW contingent facing off with Kojima afterward.

Tanahashi: There was a lot of heat in that building. I was at ringside for that match; the defeat for Tenzan was one thing, but when Kojima went to leave and tossed the IWGP Championship into the ring, that was when the switch flipped (watch on NJPW World!)

–You really dove at Kojima.

Tanahashi: Yeah, yeah, I hit a guy who’d just wrestled for 60 minutes from behind (laughs). The young AJPW guys cut me off pretty quick. 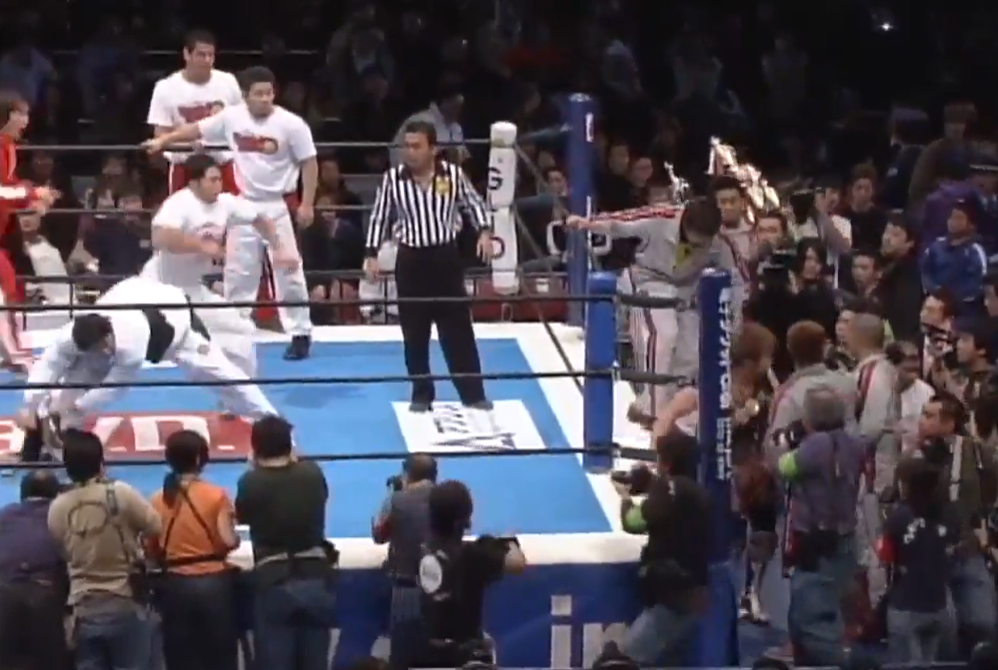 –It’s quite an interesting video to check out on World in retrospect. Tomoaki Honma and Taichi as AJPW representatives, Shinsuke Nakamura picking up the belt that Kojima tossed, you charging at him from behind on the entranceway…

Tanahashi: And then it was Nakamura that challenged Kojima, not the guy that whacked him (laughs).

–Nakamura challenged the next month, March 26 in Ryogoku. The match went to a 60 minute draw; from your standpoint, did you feel an evolution in Kojima after he left NJPW?

Tanahashi: I think the big string he had to his bow at the time was incredible conditioning. Even before the KO, he certainly had better wind than Tenzan in that match; Tenzan had taken a beating though, of course.

–Tenzan’s injuries did start piling up in the later part of the decade. Meanwhile, you and Nakamura still held the IWGP Tag Team Championships. March 13 in Aichi, you faced Scott Norton and Manabu Nakanishi, and beat Norton with a Shining Wizard.

Tanahashi: A Shining Wizard? For real? Not very respectful of me, there (laughs).

–A throwback to the prior month perhaps. For a long time, Norton was the foreign ace o0f NJPW, before Giant Bernard took that mantle. What are your thoughts on Norton?

Tanahashi: He took a shine to me I think. When I was a Young Lion, I would have to wash his gear every now and then, and he was very nice every time. I wrestled him quite a few times in the early 2000s, and he took me to some 20 minute draws as well.

Tanahashi: He knocked me out completely with a powerbomb once. I tucked my head for the bump, but he threw me down so violently that the back of my head whiplashed into the mat. I lost about thirty minutes of memory. Later on, my matches with Bernard became very important, but it was Norton that taught me how to work that style against a big foreign heel. 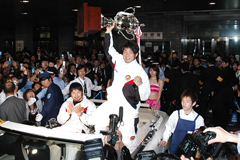 –Heading into April, and between April 19-24 in 2005, the inaugural New Japan Cup took place, under the branding of ‘the spring G1’. From the second cup onward, the winner of the cup received a title shot, but at this point, Tenzan and Kojima’s rematch was already set for May 14 in the Tokyo Dome.

Tanahashi: This was all for pride and the trophy, but all the same, the concept was a hit. Something being born in difficult times for NJPW, and surviving to the present day is pretty cool.

Tanahashi: Ah, you’re too kind. But I have a lot of memories of that tournament. The first round especially.

–In Hiroshima with Yuji Nagata. Nagata was firing into you and ignored the referee’s orders to break, giving you the win by DQ.

Tanahashi: I mean, I won, but his kicks really did a number on me. My wife was pregnant with our son at the time. That evening I got a message from her saying she was on her way to the hospital; I got on the Shinkansen first thing in the morning, but by the time the train had gotten to Osaka, I got another mail saying he was born. I just missed it, but all’s well that ends well.

–No wonder you won’t forget that first round!

Tanahashi: Beaten half to death right before my son’s birth! But it definitely motivated me to win the whole thing!

–This first New Japan Cup was an openweight tournament. The next night in Korakuen you beat Koji Kanemoto with a Dragon Suplex, then on April 24 you had Hiroyoshi Tenzan and Manabu Nakanishi on the same night.

Tanahashi: So the theme for me in this Cup was that I was wrestling all Third Generation guys, who had broken in at the start of the ’90s. All those matches were super tough.

–Nakanishi was incredibly powerful at the time.

Tanahashi: Whatever you did had no effect on him! It’s like if it was a fighting game, I would finally chip away at his health gauge and then all of a sudden it would fill back up. It was just so tough. Before he had his neck injury, Nakanishi was just a beast, you couldn’t wear him down at all. Choshu would call him a monster, even. No normal human could do what he did at his size.

Tanahashi: Right. I won with a Slingblade, but Nakanishi was still hot after the match too. Back then, the Third Generation guys had the sway in NJPW, so whether you won or you lost, it would still be about them asserting dominance.

–So it was difficult to really establish yourself against them.

Tanahashi: Yeah. At the end of the day, you could win a match, but the way the match flowed was all about them. I couldn’t say so at the time, but even when I won I felt like I lost.

–But your win in the Cup really heralded a new era, looking back.

Tanahashi: It felt like a come back moment for me, having lost the U-30 title at the Dome. It would never happen now, but after I won the Cup, I even had a little parade in an open top car! We drove around the block near the Osaka Prefectural Gym.

–Tenzan was the only other wrestler to ever do that, after the 2004 G1. A rare honour.

Tanahashi: It was really tough to get arranged, so I hear. We had to get clearance from the police and everything. But it was definitely a really cool moment. I’ll certainly never forget that cup.

–And an interesting detail was that Nakamura was sat alongside you in that car.

Tanahashi: I think this was the first time I was able to take a step ahead of him in a way, to do something first. It’s definitely amazing to be the first, to be that history note. I was super proud of it for a while afterward.