–Let’s continue talking about the July 17, 2006 night that saw you win the IWGP Heavyweight Championship for the first time. After champion Brock Lesnar suddenly no-showed, a six man tournament was hastily put together to crown a new champion. You were the rightful number one contender, and Giant Bernard had won the New Japan Cup, giving the two of you byes as Akebono beat Hiroyoshi Tenzan and Yuji Nagata defeated Travis Tomko to advance. Then you scored the win over Nagata, and Bernard over Akebono to set up the final.

Tanahashi: Well, I’d been preparing for that title match leading up to the night anyway, so I was in good shape, and it felt good to get revenge over Nagata after I lost to him in the Cup that spring.

–Bernard had come in to New Japan that January 4, and was really positioned as the non-Japanese ace all the way until he left in January 2012. He’s a really significant figure when it comes to your career.

Tanahashi: I’ve nothing but gratitude for Bernard. He really made Hiroshi Tanahashi the wrestler he turned out to be. That narrative of the smaller Japanese guy finding a way to overcome this massive foreign opponent; it helped make me who I am, and it really set me up when it comes to a psychology standpoint. 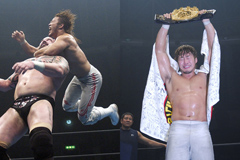 –Bernard to you is similar to the position Big Van Vader had in Tatsumi Fujinami’s career.

Tanahashi: I watched a ton of those matches. There was such a difference in size and strength, but Fujinami would be able to find a way on pure skill and technique. You couldn’t help but pull for him. They were such masters at building up that sense of expectation and hope, getting energy from the people. It was a real life ‘Dragon Ball’ situation.

–You would ride that support to defeat Bernard with a series of Slingblades.

Tanahashi: I was using High Fly Flow around that time, but not as a finish yet, and that meant the structure of my matches were different to what they became. I’d wrestle Bernard a bunch more over the years, and I always felt we had a similar outlook on wrestling. He was especially great for me when I was consumed with this idea of overcoming that third generation, and trying to get past that gate they were keeping.

–Back then you said that you and Bernard were reforming NJPW, by taking what worked from America.

Tanahashi: Well, I think he reaffirmed what I believed, you know. That’s what came out of those matches. And he was a big scary dude, but he was a really smart wrestler.

–Now he heads up WWE’s Performance Center after having retired in 2014.

Tanahashi: We’ve sent messages back and forth since, just keeping in touch. He was a real ally while we were rebuilding NJPW in those lean years. I look forward to meeting him again sometime. 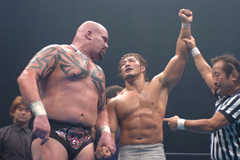 –That win over Bernard captured you your first IWGP Heavyweight Championship, after six years and nine months of trying. You’d go on to hold that title eight times, more than anyone else. How did that first win feel?

Tanahashi: It didn’t feel real at first. The venue wasn’t sold out that night, but when I won, the fans all rushed forward to the guardrails. These days there would be an announcement to tell the fans to stay in their seats, but not that night. I saw them rush the guardrails, and it was surprising in a weird way. Like, ‘they seem really happy! I guess it’s OK for me to be?’ (laughs)

–You were surprised at that show of support?

Tanahashi: Yeah. In a good way. Like even though things were bleak for the company, these fans hadn’t given up, they were showing their passion. Especially with Lesnar going home the way he did, it was really touching to see the fans react like that. It was like a light in the darkness.

–And you addressed those fans by apologising for what had happened with the card, but that you would live up to their expectations going forward. This was the first time you used your ‘I love you’ line that became a catchphrase.

Tanahashi: It isn’t the sort of thing that you’d expect a wrestler to say. Hell, it isn’t something I say all that much in day to day life. It wasn’t something I’d really planned for, but out it came.

–It wasn’t quite the same way you’d close a show tonight. Instead of that dramatic ‘I love yooou!’ you said ‘I love all of you who came today, and I love NJPW! Thank you!’

Tanahashi: I hadn’t given it any thought beforehand. I definitely wanted to express how much I loved the company, and wrapping the fans into that statement was a way to thank them as well. The words just came tumbling out.

–It was an impactful line in the end.

Tanahashi: It’s a difficult word for Japanese people to say, particularly, right? We’re a reserved country.  It isn’t even something people say to their wives or girlfriends all that often at all.

–Jyushin Thunder Liger since remarked that at first the words didn’t resonate with the old school fans and wrestlers.

Tanahashi: Well, what are you gonna do? Nobody had said it in a NJPW ring before. Pioneering is tough (laughs)

–Well, Liger would go on to say that when the catchphrase took off it really took off, and it changed the landscape in NJPW.

Tanahashi: That’s great to hear from him. Before I knew it, I was professing my love to tiny little towns after winning a six man tag, but back then, I only reserved it for title matches. After this win, the next time I said it was in October when I defended against Tenzan. I used to say it while I raised my open hand.

–Nowadays you raise your fist in the air.

Tanahashi: I was still workshopping it, you know. It’s wild to think about it, but it took about a year to really get that catchphrase over. Then Okada and Naito would get theirs over in a few weeks.

–Well, you created an environment for other wrestlers to get a catchphrase over like that.

Tanahashi: And times changed because people know us, now, they know the product enough that we can go to a tiny town and fans know about calling ‘De! Ja! Pon!’. When they can chant at least, heh.

–Before you, there really weren’t many other catchphrases in NJPW. Antonio Inoki’s famous ‘1,2,3, daa!’ and that’s about it.

Tanahashi: I guess so, come to think of it. It was weird, even hashimoto or Fujinami would end a show with the ‘daa!’

–Have you ever done that yourself?

Tanahashi: No, no. The only time that was close was that Inoki town hall segment in Sapporo (February 1 2002). He did the ‘daa!’ but I didn’t join in. It reminds me, when we had All Together (the August 27, 2011 all-star charity event), I ended the night with an ‘I love you’ and Tetsuya Naito was the only one there who refused to take part. All history repeating, heheh.