What next: Kota Ibushi interviewed (2/2) 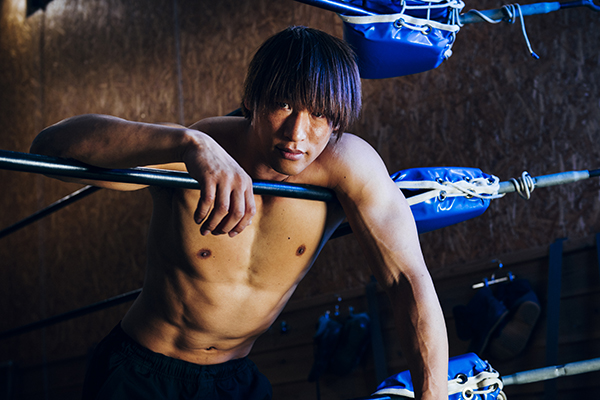 After losing the IWGP World Heavyweight Championship to Will Ospreay at Sakura Genesis, Kota Ibushi would withdraw until April 29 in his hometown in Kagoshima. With plenty of questions about the former champion’s current state of mind still unanswered, we sat down with the Golden Star in his personal Dojo.

I’m delighted to say I was first 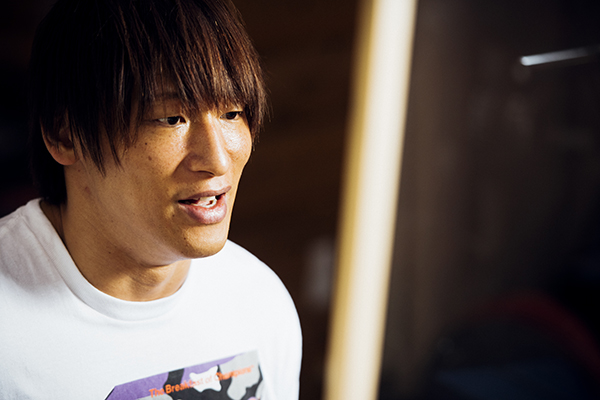 –Where we left off last time, we were talking about the discussion around the IWGP World Heavyweight Championship unification.

–Whatever side of the fence you fall on, you have to agree it was a turning point in NJPW history, and you were right at the center of it all.

–There was a lot of discussion about the design of the title itself. What are your thoughts? It certainly calls back to all the title belts in history.

Ibushi: Hmmm. You know, I think I’ve always had this image in mind that a championship belt is always round.

Ibushi: So when I first saw this title, I did think ‘woah, this is really different!’. I think though that the design is something that will win everyone over in time.

–I think people are getting used to the image of that title with Will Ospreay.

–But when we first saw it, it certainly looked very different. It really felt like a new era, with you at the forefront.

Ibushi: That’s awesome. I’m delighted to be able to say I was the first. A lot has changed, even since I was a junior heavyweight.

Ibushi: Both. When I first started in this company, the junior heavyweight title match would always be in the first half of the card at Wrestle Kingdom each year. Then it started moving up to third from the top or thereabouts. Like when I wrestled Prince Devitt.

–In 2014, you and Devitt were right before the two main events.

Ibushi: That was a ‘wow’ moment for me. Like ‘oh, wow, things are changing’.

–And years later you were part of a big turning point for the heavyweights as well.

Ibushi: That’s a heavy spot to be in. But looking back now, I can say I’m definitely happy I was in it.

–We’re coming up to 50 years of NJPW, and that’s something that people will still be talking about decades from now.

Ibushi: That’s amazing. Really it is. Being the first is something nobody can take away from you.

I was too fixated 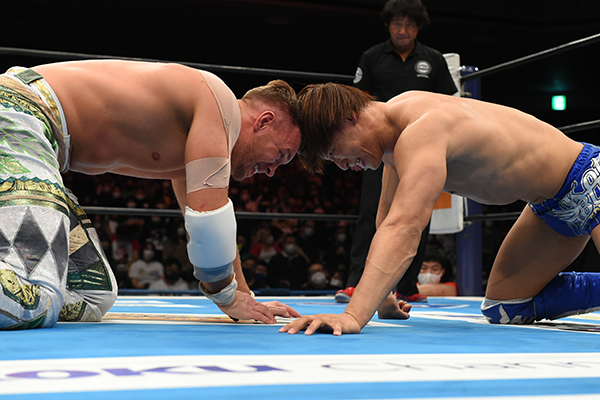 –Of course, you lost the championship on the first official defence against Will Ospreay at Sakura Genesis.

Ibushi: That match… I was too fixated.

Ibushi: Fixated on approaching things differently. That really wasn’t my usual physical match. I wanted to play a mental game, I guess, use my pro-wrestling mind. And at first that was working tactically, but Ospreay completely changed the flow of that match. He has this kind of instantaneous power that really surprised me. When he used that, I couldn’t get back into the match at all. It’s more than explosiveness, but obviously he has that, but an ability to use that explosiveness. It took me off guard.

–So it wasn’t the kind of Ospreay match you were expecting?

Ibushi: It was completely different. It’s not just that he’s heavier now. He’s a different wrestler to the guy I faced before.

–You were actually dealing with a foot injury throughout the first part of the year. When did that happen?

Ibushi: It was that first match with Naito, January 4. I think it was when I took a Frankensteiner off the top, and just landed right on my instep. So I think it either sprained or tore a ligament. It’s an injury soccer players get from time to time; I was told it’s best not to move it for three months, but then I had Jay White the very next night. I got to the building early the next day and got it patched up and treated well enough to just about wrestle.

–And you wrestled 48 minutes on that foot.

Ibushi: I was able to jump, and put some power into it. Then it was really a matter of getting what treatment I could and working around it. It wasn’t so much about healing as it was to stop it getting worse.

–And how is it feeling now?

Ibushi: It’s about the same as it was around when I wrestled SANADA. I’m having to train around it, since I can’t really run like I would normally.

I wanted at least one defence 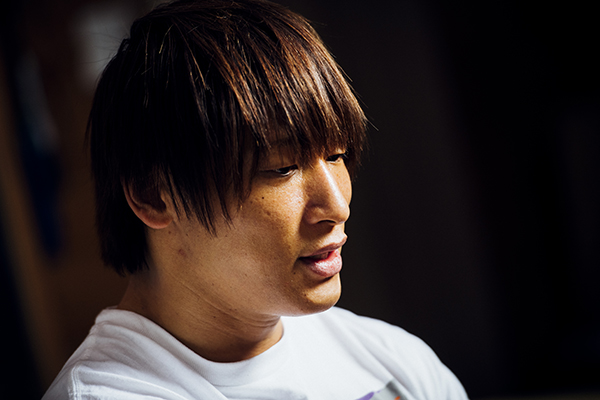 –To get back to the Ospreay match, it must have been a tough loss to accept.

Ibushi: At first, it was just a wave of disappointment. After all I’d said and done, to not even get one defence, that was really tough. There was maybe a little about me that thought ‘well, things will get easier now, at least’. But yeah, I think most of all, it was really sad.

–That ‘easiness’…There was that disappointment, but maybe a bit of closure, you mean?

Ibushi: It didn’t quite feel real. There was a lot going on in my mind, how tired I’d been, how hard I’d been pushing, and for what? The truth was I hadn’t even had one defence. It was a release, but not in a positive sense. I think there was a bit of me that was ready for a break as well.

–In the end you didn’t wrestle until Kagoshima April 29.

Ibushi: I wanted at least one defence. But if I’d defended in Ryogoku, then that schedule would have been waiting on the other side.

–Would you say you were burned out?

Ibushi: No. No, I’m not burned out. I want to get back in that mix. I want to win that title again, and really show everyone that this is the new IWGP World heavyweight Championship.

–It’s safe to say that winning the IWGP Heavyweight Championship, winning both championships was the realization of a dream for you. But was it different in reality from what you imagined it to be?

Ibushi: Right with COVID being the way that it has been was a big part of it, and like I said it didn’t quite feel like I’d properly won it in the first place. I really want to do it over. I really want to win that belt back, if I can call it winning it ‘back’.

Ibushi: We talk a lot about people bringing their ‘colour’ to a belt. I don’t think any of mine is on it.

–That’s the level of competition in NJPW, isn’t it? Will Ospreay has only been champion for a month, and already there’s such a crowded scene around him with people wanting their own shots.

Ibushi: Right. I’m not sure if I can get in that mix so easily. If you stand still, you move way backward.

Maybe I am the Devil? 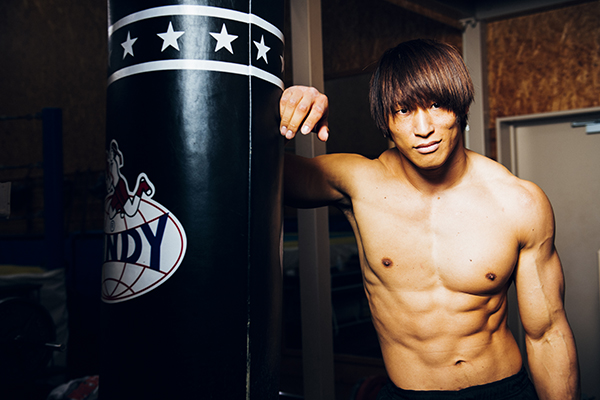 –During the unification talk, Kazuchika Okada had some particularly salty comments for you, and when you teamed with Okada and Hiroshi Tanahashi in Sendai during the New Japan Cup finals, things were very tense.

Ibushi: Well, that’s Okada for you. Nothing new there.

–He said you call yourself God all the time, but you wound up acting like the Devil.

Ibushi: Maybe I am? Maybe that’s the truth, heh. But truth and this business are strange bedfellows, the true answer is rarely the most interesting one. But I respect Okada. The career he’s had… Well, we debuted at the same time, but him so much younger, and he’s run so hard so early. You can’t help but respect that. 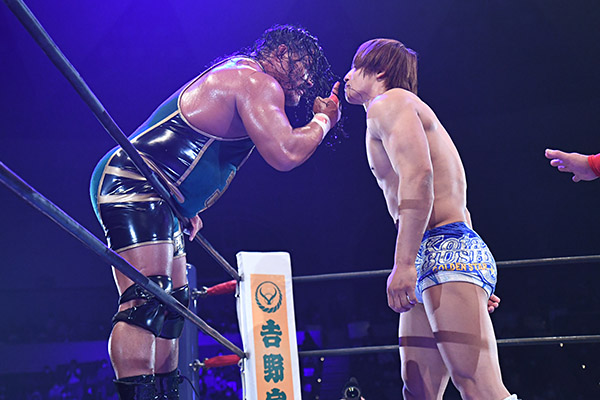 –Immediately after you lost the title to Will Ospreay at Sakura Genesis, Jeff Cobb hit you with a Tour of the Islands. That led to a challenge issued in Kagoshima. What are your thoughts on Cobb?

Ibushi: We talked about this before, but when I had the Ibushi Wrestling Research Institute I wanted to recruit Olympians. So obviously I’m interested in Cobb. We had that first meeting in the G1, but…

–You want to face him now he’s part of the United Empire.

Ibushi: Right. That power isn’t something that I can hope to have. I mean, I have the power and the speed that I have, but here’s a guy the same age as me with both off the charts. 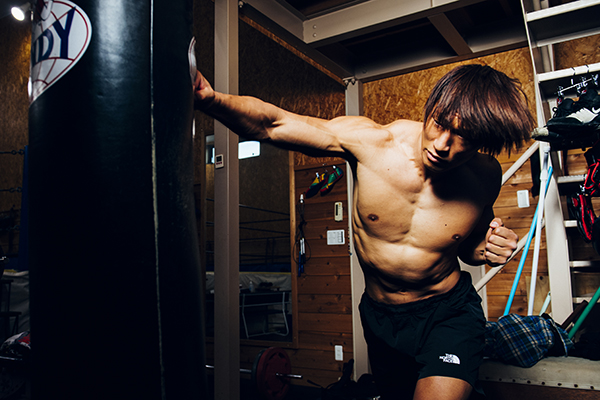 Ibushi: Exactly. So there’s a lot of levels to that match. He’s the most interesting opponent there is right now, I think.

Ibushi: This match isn’t about some cliché that I’m coming for revenge. There’s a bit of that for sure, but whether or not he did what he did at Ryogoku, he would still be right at the top of the list of guys I want to face. I can’t wait. 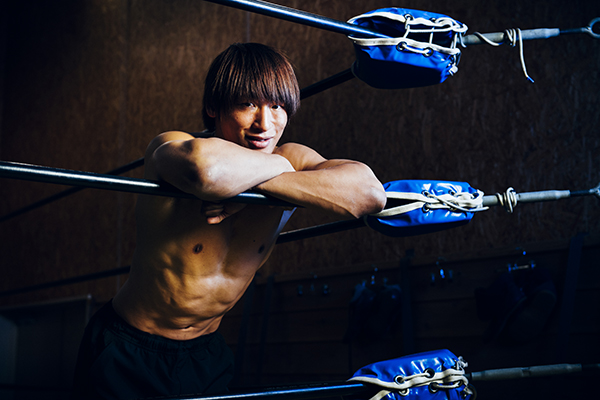