–Last time we talked about how you worked for Keiji Muto as his assistant. But you actually also did some work for Riki Choshu as well, correct?

Tanahashi: Right. Muto was easy to work for; he liked doing everything himself, but Choshu was very, very old school. He would get to the back and expect you to untie his boots for him, stuff like that.

–A lot of people strongly associate you and Muto with one another, so they might not know your connection to Choshu.

Tanahashi: Oh, I might have a lot of Muto-ism in me, but there’s a fair bit of Choshu in there, too! Even if it’s just the hair (laughs). But Choshu would often invite me to dinner and stuff, too. It’s just that there was a conflict of interest with Muto sometimes. I’d have to turn him down and say ‘actually I already promised to go with Muto-san…’ and he’d get pretty pissed off. Like ‘You’re turning down my invitation?!?’ (laughs).

–I could see that being a problem.

Tanahashi: Meals are important to him. A lot of times he’d just out of the blue: Oi, Tanahashi, go and buy some Yoshinoya!

–He ran on beef bowls?

Tanahashi: Pretty much! Two big bowls with extra beef. That order would always either come down to me or Makabe to run and get for him.

–That Riki Lariat needed a lot of beef behind it.

Tanahashi: Literally. He’d just thrust cash in your hand and go ‘get yourself somethin’ too’. I’d be carrying this stuff back to the ghotel for him thinking about just how much one man could eat.

Tanahashi: Nobody would be happier than Choshu!

–Did you ever incur Choshu’s famous temper?

Tanahashi: I remember one time the cap on his shower gel wasn’t shut properly and it went all over his bath towel in his bag. When I realised I had to think fast so I swapped out his towel for one of Muto’s.

–I think the statute of limitations on that is done now (laughs).

Tanahashi: The benefit of working for two people at once (laughs).

–So he never got mad at you?

Tanahashi: Nah, I think I handled him pretty well. He got really fired up giving feedback on my matches though. He’d curse up a storm yelling ‘you’re not some kind of old man out there! You’re young! Show some fire! Use your voice! Yell!’

–That Young Lion fire was important to him. Speaking of which, even though you came into the Dojo a year after Katsuyori Shibata and Wataru Inoue, you all debuted on the same day, October 10, 1999. 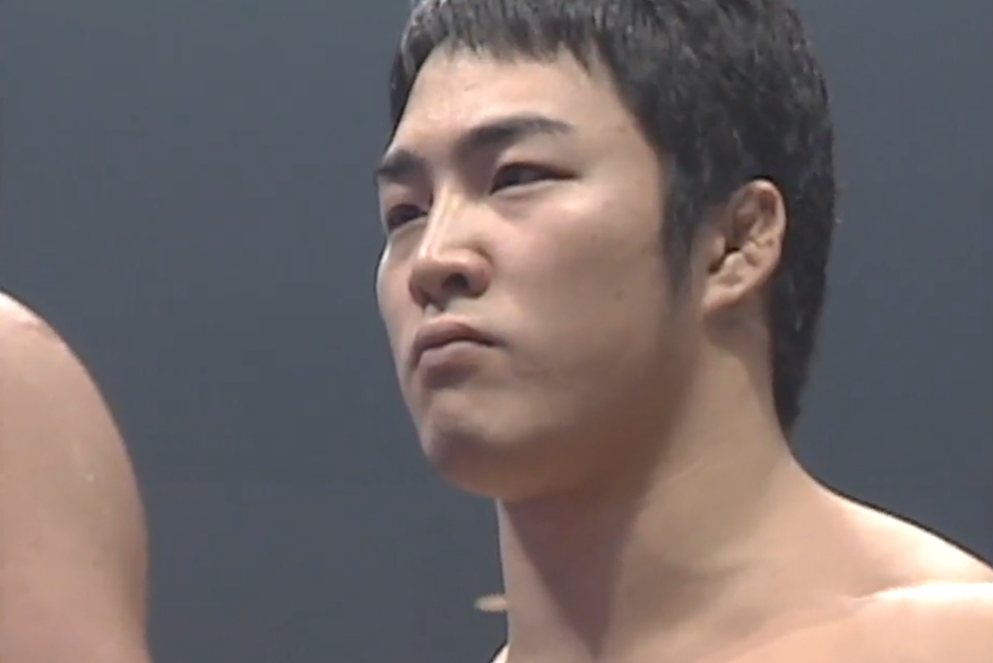 Tanahashi: Right. I was able to debut six months after I joined in the end. I used that one year while I was waiting to come in to work out and make sure I could debut as quickly as possible. I was 90kg when I joined the Dojo, and from there I packed away the chanko and the protein to get even bigger. I would be making protein shakes before I went to bed, then waking up at 3AM to drink them and going back to sleep.

–Like you were training even when you were sleeping!

Tanahashi: Your body is making the most muscle while you’re asleep, so maybe that was the best time to get protein in. I did that for six months and put on 12kg.

–That’s impressive! You often hear of Young Lions losing weight before they debut with the stress making it hard to sleep and whatnot.

Tanahashi: That’s right, but I was the opposite. And my body fat was the same, so I was putting on pure muscle. I wouldn’t have said it at the time for fear of being beaten up, but I think I was in better shape than anybody in the company by the time I debuted.

–Hahaha! That’s The Ace we came to know and love!

Tanahashi: Like, Muto or Nakanishi were bigger in the upper body, but I think in terms of overall balance, I had the best body (laughs).

Tanahashi: Yeah, that was all me, I think. When I came along, people started drinking a lot more protein. That was the ‘Tanahashi Revolution’, heheh!’