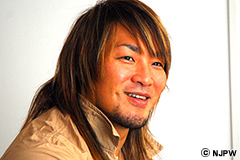 –Last time we talked about your match in May of 2004 in the Tokyo Dome. That June, Tatsumi Fujinami stepped down as the president of NJPW, ad was replaced by Seiichi Kusama. What did you think of him?

Tanahashi: Hmm. Well, he was good at presenting himself. He certainly looked like a great businessman on the surface.

–He was a professional businessman, and had held important positions in big publicly traded companies.

Tanahashi: But we didn’t really connect. To be honest, I can’t remember having more than the occasional conversation with him.

–That’s strange. He stated in public that he felt that you and Shinsuke Nakamura were ‘names to build the brand around,’ but…

–How did you feel about your mentor in Fujinami stepping down?

Tanahashi: Well, to be honest I wonder whether Fujinami being on top was more for a company position of having a famous name in that position. I’m not sure just how much influence he had on the real business dealings of the company. But president or not, Tatsumi Fujinami is Tatsumi Fujinami to me, so my respect for him never changed.

–That June you were scheduled to challenge for the IWGP heavyweight Championship for the first time in Osaka. The champion Bob Sapp pulled out of the match at the last minute, which was a surprising turn of events.

Tanahashi: Ah, yeah! That didn’t turn out as planned (laughs)

–Bob Sapp was working twin schedules for NJPW and K-1, something which caused a lot of dispute between Sapp, K-1 and NJPW. In the end, Sapp vacated the title. How did you feel being in the midst of all that?

Tanahashi: I remember doing a lot of promotion for that match. I went to Osaka, did local TV, did newspaper interviews. Sapp was really the flavour of the month in the media, so that shone a big light on me. But when it all went down it was a case of ‘here we go…’

–Sapp was beaten at K-1’s ROMANEX MMA event on May 22 by Kazuyuki Fujita, so in Osaka the match became you and Fujita for the vacant title. You were quite close to Fujita coming up…

Tanahashi: Right. He was in charge of the Dojo when I came in, and we trained together quite a lot. I was bigger than the average recruit, but Fujita’s body was insane.

–The match had the theme of you standing up for NJPW against a huge invader in Fujita.

Tanahashi: Well he was a very different guy to the one who took me under his wing those years before. He had a different look in his eyes, a different aura. I remember at the Dome, he was in this big pull apart and I came to help break it up; no hesitation, he absolutely rocked me.

–So what did you think of your first IWGP title match?

Tanahashi: I can talk about this now, but I made a lot of arrangements for that match.

–What did you do?

Tanahashi: Every PR event I did, I asked everyone there to chant my name from the entrances, that kind of thing. And there were ‘Tanahashi’ chants during my entrance; that was the first time that happened for me, which was pretty cool. Fujinami was at rign side as well, so there was a real sense of excitement.

–And pressure to go along with it?

Tanahashi: Oh yeah, I was pretty nervous (laughs). I just thought ‘OK, I’ve got to go at it right from the bell’. So I actually went for a suicide dive right from the word go, but I clipped my leg on the middle rope.

Tanahashi: The adrenaline was flowing, so I was OK during the match, but the next day, it was super swollen, and really painful for about two weeks.

–In the end Fujita won via KO with a kick to your face.

Tanahashi: That was really the style at the time, to bring in MAM strikes to pro-wrestling. I got caught bad, absolutely destroyed. I think in a lot of respects I wasn’t ready for the big time yet.

–But you proved you belonged in the conversation.

Tanahashi: I thought that if I stayed on track I could be IWGP Champion one day. In the end, a first challenge after four years is pretty good going.